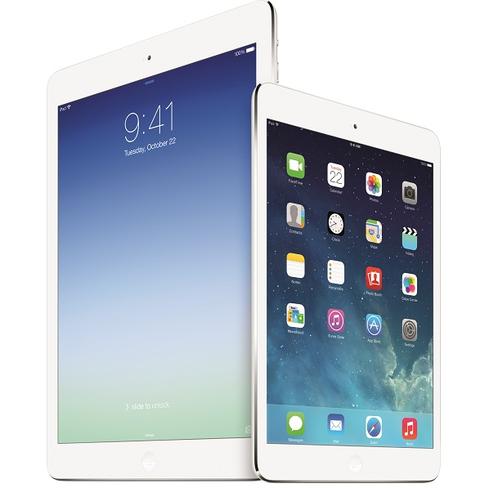 At a time when collaboration tools focus on text-based communications -- chat, document sharing, status updates, and activity streams, for example -- a new app is betting big on an old-school relic: collaborating via voice.

"While text-based communications have helped us to connect so much more, we're saying so much less because of the staccato nature of it," Pope said in an interview. "When we looked at the phone back in 2012, it was evident that while there was so much amazing innovation around apps, there was no innovation around the phone call."

Talko, which uses VoIP, aims to change that. The app blends live and recorded conversations with collaboration staples like text messages, image uploads, and tagging group members with action items. The cloud-based app is available only for iOS right now, though users can access conversations via a Web app, Pope said.

In developing the app, the Talko team focused on alleviating two common pain points people have with phone calls: the disruption caused by ringing and the disparate nature of voice. "Text, video, and photos are native to the Web. They can be linked and shared and integrated with other workflows and business apps, but voice is behind in that realm," Pope said. 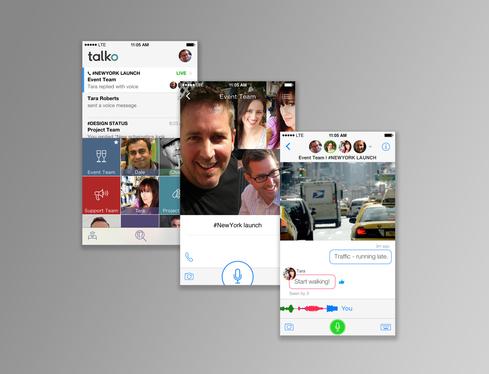 To bring voice up-to-date, Talko lets users communicate both in real-time and asynchronously so mobile workforces can keep in touch even if they're not connected. You can hold live conference calls, which are recorded and stored for people to revisit later, or contribute to a conversation by sending a voice message.

Talko notifies group members when something new is added -- whether it's voice, text, or an image -- so you can view or listen to it at your own convenience. Users can also send images during live calls to ensure everyone is looking at the same thing. 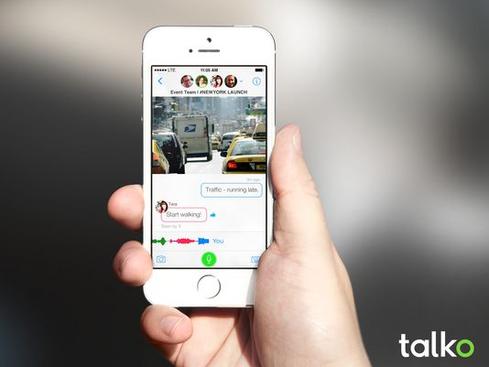 Another unique feature: Talko lets you annotate voice calls with bubbles to call out the important parts in a conversation. If a team member isn't present for a group call, for example, they could play it back, but skip to the parts that co-workers highlighted. Everything in Talko is searchable, too.

Talko targets enterprise mobile workforces, such as sales groups or teams with field workers, Pope said. The app is free, but the company is working on a premium per-user-per-month subscription for businesses that want access to older conversations beyond a certain time period. And while the app is available now only for iOS, Pope said that an Android version is in the works.

"We have mouths and ears; why aren't we using them more? Our smartphones have microphones, speakers, and Bluetooth; why aren't we using them more?" Ozzie said in a blog post. "Universally it's agreed: The phone call just sucks. If the only way of using your voice is to interrupt someone, talk quickly, and then hours later forget some key detail of what was discussed, then the phone call truly deserves to die."

Kristin Burnham currently serves as InformationWeek.com's Senior Editor, covering social media, social business, IT leadership and IT careers. Prior to joining InformationWeek in July 2013, she served in a number of roles at CIO magazine and CIO.com, most recently as senior ... View Full Bio
We welcome your comments on this topic on our social media channels, or [contact us directly] with questions about the site.
Comment  |
Email This  |
Print  |
RSS
More Insights
Webcasts
Nip Ransomware in the FUD: Detecting Attacks Pre-Encryption
Don't Miss This Cybersecurity Virtual Event
More Webcasts
White Papers
Insider Risk Management: A Better Way to Prevent Data Leaks
Aligning Cyber Skills to the MITRE ATT&CK Framework
More White Papers
Reports
The State of Endpoint Security
How IT Security Organizations are Attacking the Cybersecurity Problem
More Reports

Maybe this app is better than it sounds to me - I haven't tried it, I'm just trying to imagine what it would be like to have voice messages added to a collaboration workspace. Text-based discussions certainly have their limits, but they do have the advantage that you can scan or skim through them to find the ones that are most interesting.

Wouldn't you have to listen to voice messages one at a time, in realtime? Is there voice-to-text transcription in the mix, to allow you to scan a rough summary before playing a message?

Voice as an option certainly could be handy for mobile users, which seems to be the primary context targeted, since dictating a message would be easier than typing it. But users would need lessons in leaving concise messages, not long rambling ones (have you ever gotten one of those voicemails?).