This is the conclusion of a just-released survey of more than 100 Oracle customers worldwide conducted by the Campaign for Clear Licensing (CCL), a UK-based organization that's championing improvements in software licensing and auditing practices.

[Want to save money on software? Read Software Licensing: Move From Defense To Offense.]

On communication: Responding to the statement "Communication from Oracle regarding licensing changes has been clear and straightforward," 2% chose "strongly agree," 5% chose "agree," 46% selected "disagree," and another 46% chose "strongly disagree."

"Based on our research and conversations over the last six months, we have found that customers' relationships with Oracle are hostile and filled with deep-rooted mistrust," said Martin Thompson, founder of the CCL, in a statement on the report. "So entrenched is this feeling of mistrust that some organizations were fearful of speaking to us in case of any audit repercussions."

An Oracle spokesperson declined to comment, saying the company had yet to receive a copy of the report. Oracle has cooperated with the CCL, a member organization launched in Europe early this year and that also has plans to expand into the North American market. In March the organization reported that Oracle was "the first [software] publisher to collaborate with the CCL with a view to building on-going positive dialogue." 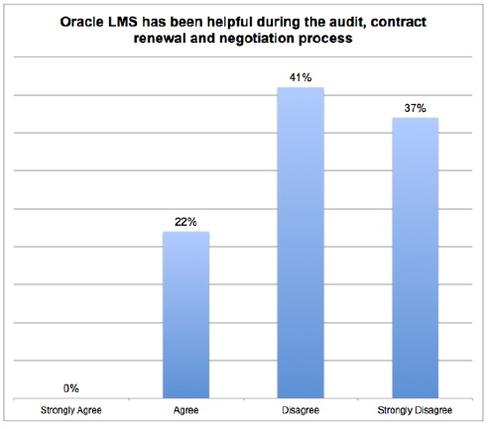 Oracle participated in a roundtable discussion with public and private-sector companies hosted by the CCL, and the group also met with the Oracle LMS team at Oracle's offices in Reading, UK. Apparently that didn't sway the findings of those surveyed, which included customers from Europe (56%), the US (29%), and the Asia-Pacific region (15%).

Oracle is one of the few remaining software vendors that takes an "honor system" approach to licensing, said Amy Mizoras Konary, research VP, software licensing and provisioning, at IDC. In contrast to what she calls a "trust-but-verify" approach, where unlicensed features are locked down, Konary said the honor system makes it all too easy for administrators to install and turn on features not covered by a current license.

Oracle Database, for example, is known for tricky licensing and frequent compliance problems, particularly in virtualized environments, according to Konary. To avoid problems, "a simple rule might be, 'Oracle Database does not go into virtualized environments, and if it does, here are the steps that must be followed,'" Konary told InformationWeek in a recent cover story on license-management practices.

Thompson of the CCL concluded that "whilst every organization entering into contracts must be accountable for the agreements they purchase, a disproportionate amount of risk and management overhead appears to be placed on the customer by Oracle. Similarly, many customers have not invested, or are not capable of investing, sufficient resource to manage their Oracle estate."

Doug Henschen is Executive Editor of InformationWeek, where he covers the intersection of enterprise applications with information management, business intelligence, big data and analytics. He previously served as editor in chief of Intelligent Enterprise, editor in chief of ... View Full Bio
We welcome your comments on this topic on our social media channels, or [contact us directly] with questions about the site.
Comment  |
Email This  |
Print  |
RSS
More Insights
Webcasts
Detecting and Preventing Insider Data Leaks
Cybersecurity's Next Wave: What You Should Know
More Webcasts
White Papers
Sunburst: Impact and Timeline
The Hidden Security Risks of APIs: How to Protect Your Brand, Business, and Data
More White Papers
Reports
Key Strategies for Managing New Risks in Cybersecurity
The State of Cloud Computing - Fall 2020
More Reports

I'm also no statistican, but if you use a online sample size calculator such as the one at SurveySystem.com, choose 95% confidence level, 10 confidence interval (also called margin of error), and 400,000 population size (calculated from Brazingo's numbers), the sample size needed is 96.

Also consider this from Gallup:

"The current US adult population in the continental United States is 187 million. The typical sample size for a Gallup poll which is designed to represent this general population is 1,000 national adults."
Reply  |  Post Message  |  Messages List  |  Start a Board

I know @Brazingo on Twitter as analyst Donald Feinberg of Gartner. I'm no statistician, but I do know these CCL survey results are consistent with Gartner's recent (October 2014) database Magic Quadrant observation that "in recent Gartner surveys, Oracle received the lowest score for ease of doing business." I assume that had a lot to do with licensing and LMS negotiations.
Reply  |  Post Message  |  Messages List  |  Start a Board

I wish the Harvard Business Review or some academic source would do a study on Oracle's approach to customer relations. What happened at Montclair State as its sought to get fulfilled what it thought was the terms of its contract for an ERP implementation might be interpreted as persistent threat and intimidation. If there's a disagreement over the contract, threaten the customer with millions in new charges. If the customer remains dissatisfied, threaten to walk. If the customer refuses to be cowed, then walk, leaving the project unfinished. It may not be that simple and there's two sides to every dispute. But Oracle's actions followed a pattern of intimidation thoughout. Then I ask myself, it's not really that bad, is it? I'd llke to see an attempted, objective answer.
Reply  |  Post Message  |  Messages List  |  Start a Board

As Lorna points out, this is certainly not the first time we've heard complaints from around the industry about Oracle's licensing and the 'honor system' approach in general. I myself have mixed feelings about it. There's certainly an argument to be made that a hands-off approach simply saves the software vendor lots of time, money, and headaches, without much need for an alterior explanation. On the other hand, I find it hard to believe that a company as big as Oracle has a need to shave those meager costs, and is not doing it for any other reason.

I remember reading a few years back that a high court (I think in the US) finally struck down the notion that all EULAs were binding forever, regardless of what was in them. That is, you can't just stick something ridiculous in there, selectively enforce it whenever it's convenient for you, and get away with it scott free. I doubt Oracle is running the risk of being on the wrong side of the law here, but nevertheless, it seems like they're relying on their size and clout to save them where their policies and customer satisfaction might otherwise cost them. Perhaps not the smartest idea in the age of the agile startup.
Reply  |  Post Message  |  Messages List  |  Start a Board

Why doesn't the company build in license management though? It must know that playing gotcha with customers is not a long-term winning strategy. Oracle's bad rap in this regard is hardly new. I don't get the logic.
Reply  |  Post Message  |  Messages List  |  Start a Board

It's very clear that Oracle's current licensing approach makes it easy to make use of features you're not necessarily entitled to use under your current license. Oracle says that makes it easy to find and use valuable features and functionality, but it also makes it easy to get out of compliance with contracts and end up having to pay fines. Lots of software license optimization system vendors and a raft of Oracle licensing consultants are emarging thanks to the challenges of licesning Oracle software.

The Campaign for Clear Licesing has published this free "Oracle Licensing Quick Guide" to help customers navigate Oracle's "complex and treacherous" licensing policies. There's no doubt that customers get tons of value out of Oracle products or they wouldn't be using them. CCL is just asking for better clarity and consistency on licensing terms, what's included/covered by current licenses and what's optional. The technology exists to handle rights management in a clear way, but it's not being used.

Doug, Do you think Oracle leaves options unlocked as back-door marketing, hoping to get IT to try the features, like them, and then pony up? I mean, that would make sense. But perhaps a better method would be to set a time limit for "free" use. Maybe after a month a notice pops up to contact Oracle to upgrade to buy the feature, and that key is needed to continue use.
Reply  |  Post Message  |  Messages List  |  Start a Board
Editors' Choice
Hot Topics

More Informa Tech Live Events
Key technology trends in 2021 - Making these technologies work for your businessCybersecurity's Next Wave: What You Should KnowStrategies for Success with Digital Transformation