Censorship, lack of privacy, and other ills threaten the health of the Web, says World Wide Web Foundation.

The Web "is becoming less free and more unequal," according to the World Wide Web Foundation, a group founded by the creator of the Web, Tim Berners-Lee.

In its 2014-2015 annual Web Index, the World Wide Web Foundation warns that governments and elites are gaining control over the speech and actions of ordinary citizens and cites several threats to the Web as a medium for democratic participation. These challenges include: unchecked surveillance, online censorship, lack of network neutrality, inaction against gender-based abuse conducted through communications technologies, and lack of Internet access.

The Web Index report notes that laws against mass surveillance are weak or nonexistent in 84% of countries, up from 63% in 2013. "Worryingly, the tendency seems to be towards bulk collection of data in secret and by default, raising the spectre of the Web becoming established as a tool for pervasive surveillance," the report says.

It finds that censorship is growing, with almost 40% of countries blocking politically or socially challenging content, in part or in extreme, up from 32% in 2013.

Net neutrality, the notion that Internet traffic should be treated in a non-discriminatory manner, is fundamental to Web access, innovation, and competition, the report states. But it's rare: Only three countries scored well on net neutrality: Chile, Israel, and the Netherlands. The report claims that 74% of the 86 Web Index countries lack clear, effective net neutrality rules or show some evidence of traffic discrimination. 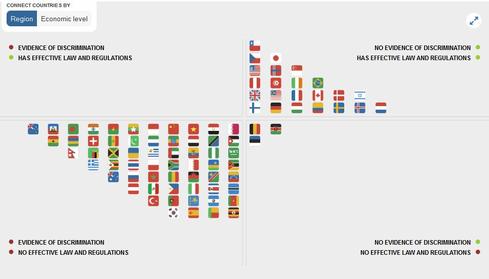 [What do you know about net neutrality? See Net Neutrality: Too Much Spin, Not Enough Facts.]

In the US, there's a contentious fight over net neutrality, with technology companies lobbying for the regulation of Internet access as a utility and telecom carriers arguing otherwise. The FCC is expected to propose a revised set of rules next year.

Harassment of women online is rampant, the report finds. It cites Pew Research findings that 26% of women aged 18-24 have been stalked online, and 25% have been the targets of sexual harassment. The Web Index report says that in 74% of Web Index countries, authorities fail to take sufficient action to prevent and deter online abuse.

Finally, the Web Index finds that 4.3 billion of the world's people have no access to the Web, and another 1.8 billion have limited privacy and freedom of expression online.

In conjunction with the release of his foundation's report, Berners-Lee said that the Web should be recognized as a basic human right. "That means guaranteeing affordable access for all, ensuring Internet packets are delivered without commercial or political discrimination, and protecting the privacy and freedom of Web users regardless of where they live," he said in a statement.

In March, in conjunction with the 25th anniversary of the creation of the World Wide Web, Berners-Lee called for a digital bill of rights to sustain the Web.

The United States ranked sixth in the Web Index overall rankings, behind Denmark, Finland, Norway, the UK, and Sweden. But in terms of privacy and surveillance, the US (along with Australia, Canada, France, and the UK) scored below three points out of ten, putting it in the company of China, Russia, and Turkey.

Does your IT team deserve some praise? Apply now for the 2015 InformationWeek Elite 100, which recognizes the most innovative users of technology to advance a company's business goals. Winners will be recognized at the InformationWeek Conference, April 27-28, 2015, at the Mandalay Bay in Las Vegas. Application period ends Jan. 16, 2015.

Thomas Claburn has been writing about business and technology since 1996, for publications such as New Architect, PC Computing, InformationWeek, Salon, Wired, and Ziff Davis Smart Business. Before that, he worked in film and television, having earned a not particularly useful ... View Full Bio
We welcome your comments on this topic on our social media channels, or [contact us directly] with questions about the site.
Comment  |
Email This  |
Print  |
RSS
More Insights
Webcasts
Architecting Security for the Internet of Things
The Pesky Password Problem: Policies That Help You Gain the Upper Hand on the Bad Guys
More Webcasts
White Papers
5 Key Steps for Assessing Your Security Effectiveness
The Malware Threat Landscape
More White Papers
Reports
The Future of Multi-Cloud Networking 2020
Email Security Threat Report 2020
More Reports

In developing regions of the world the problem is the worst. Firstly, economics can make it difficult for individuals to gain access to the web. Secondly, the problem is compounded by government censorship and the individuals that have access to the web do not gain the full benefits of free flowing information. And, in a global environment that is heavily dependent on the Information Economy, being trapped in these two situations might kick start a new vicious cycle which would be hard to break.
Reply  |  Post Message  |  Messages List  |  Start a Board
Editors' Choice
Hot Topics