Tyranny Of The Beep: Taming The @#$! Sensors - InformationWeek

7 comments
Comment Now
The Internet of Things could spark an explosion in senseless computing. 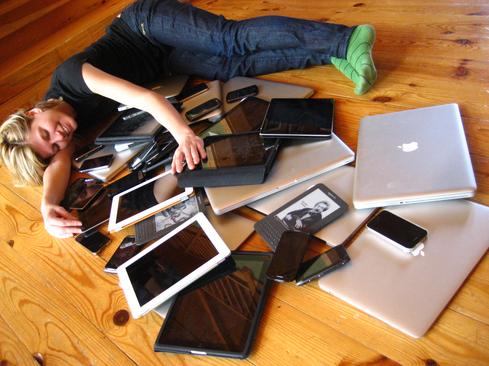 Agreed. Even more to the point, imagine Facebook-type experiments where you are now wholly reliant on your "mind-reading" device that now, unintentionally, makes decisions FOR you. Someone hacks a CEOs device and "reschedules" a meeting that destroys the merger he was working on. Some ad company manipulates sensors so that your driving path to work is re-routed in order to get maximum visibility on a new billboard they posted. The possibilties of "human hacking" are endless. Information and control are both forms of power - turning all that over to devices is a horrible and slippery slide that I pray we never approach.

A common theme to all my posts can be summed as such "Sure, it sounds great, but what are the negative and unintended consquences of this technology?" aka "Just because you CAN do something doesn't mean you should.

It's a nice goal to stay disciplined in the face of alerts, but how many of us remain disciplined about, say, only checking email at set intervals? Easier said than done to tune out these alerts.
Reply  |  Post Message  |  Messages List  |  Start a Board

"Ultimately, we will need to trust these apps more than we trust ourselves. And therein lies the adoption drag factor."

So are you actually saying we need to have faith in the Cloud?  Sounds like the Call of the Sirens.  It is not just "these apps" we will need to trust, it is the nature of the dependency demanding the trust.  We are vulnerable enough as is since we are driven primarily by our unconscious.  Once "these apps" are trusted more than "ourselves" we will be more likely to be victims of regimentation.

Sadly, human nature is susceptible to tranny under many guises.  Self interest and trust are the bait used most effectively by others to exploit us.  Laziness and greed are in that mix.  Drag is another way of not getting "ahead of yourself."  I for one don't want to go over a cliff.  This is the equivalent of jumping off a cliff because the app said you could fly.

I recently saw a blog which strongly stated that the so-called Singularity would never happen.  But the blogger was making a case.  He wanted wanted us to accept his case, but used rhetoric, not prescience. We need to trust what someone else tells us, right.  In most cases they believe what they are saying, of course.  But does that mean they are actually correct?  Sorry, but no.  I don't question their veracity or their integrity.  I only question their ability to predict the future accurately.

>I will pay attention to a smoke detector but not the washing machine or blender.

Agreed. Distraction can be solved on the user side of the equation as well as on the device side.
Reply  |  Post Message  |  Messages List  |  Start a Board

I handle this by having set rules for when things get done, mostly based on the OHIO (only handle it once) principle. The idea is to make it so you minimize decisions.
Reply  |  Post Message  |  Messages List  |  Start a Board

What we need is an alert digestor.  Something that comsumes the alerts from IoT and acumulates relative urgency.  Alert From my Frig that the milk is low only acumulates 1 point on the Home scale, That backup I fixed at work last week that beeps every hour 10 points on the work scale, db is down, and noone can log in, 100 points or more.  Like SPAM measuring on emails, when the scale reaches a certain point, then we are notified, or we can look at a heat map of each scale.
Reply  |  Post Message  |  Messages List  |  Start a Board

Your comment "Imagine, for example, your wearable picks up that you are running a high fever during the night and reschedules all your day's meetings before you wake up" assumes you live your workday in meetings, cab drivers, those in the retail business and a host of others do not spend their days in meetings.  Most devices have sound controls and if the user can't ignore the unimportant things in life (even before computers) then there is no hope for them.  I have voice mail and I will not run to a phone to answer an interruption if I am busy.  I will pay attention to a smoke detector but not the washing machine or blender.  I own my devices, they do not own me.
Reply  |  Post Message  |  Messages List  |  Start a Board
Editors' Choice
Hot Topics