A "field box" is a fixture on every commercial construction site. You know the ones: the big, lockable metal boxes where foremen store tools, small supplies, first aid kits, 40" HD computer monitors, and ... wait, what?

Knaack, a brand of WernerCo, is one of the leaders in job site storage, which gives it a window into how the construction world is going digital. General contractors want subcontractors in and out fast, but they also must deal with frequent architectural changes. The traditional paper-based system might take two weeks to deliver a new set of blueprints.

"The problem was the inconsistency of modern architects -- when they deliver blueprints for 'addendums' or change orders," said Mike Bykowski, Knaack senior product manager. "In order for subs to get in and out more quickly, they needed to communicate more quickly than two weeks. In the traditional method it took forever. Software that lines everything up in 3D was starting to happen, so the guys were going more and more electronic."

Knaack's response was the DataVault, a lockable steel box that contains space and power for multiple computers and mobile devices, along with a 40" monitor, white boards, a plan table, and separately lockable storage for tools. It is, essentially, a construction site office trailer brought down to tool-chest size. 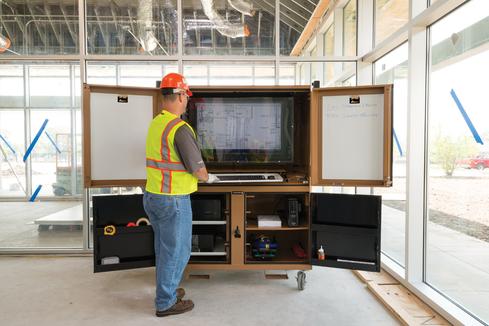 The Knaack Data Vault is designed to be the center of subcontractor and trades communication on the job site.

Moving the trailer's functions into the job site itself has many advantages, not least of which is that it gets the job superintendent out of the trailer and into the middle of the job site, says Kevin Bredeson, director of virtual construction at Pepper Construction Company in Chicago. That in itself allows for faster problem resolution and fewer steps that must be done over.

Speed is critical on a modern construction site. "One thing that's rapidly changing in our business is the iteration of design, where changes can happen several times a week. Now we can literally get an email and have it viewed in the field in minutes," Bredeson said in an interview. The old two-week wait for blueprints with changes simply isn't workable in an increasing number of cases.

[Which mobile apps could help you at work? Read 8 iOS, Android Apps That Are Strangely Useful.]

DataVault does have one significant drawback, though: It's big. It is not as big as a trailer, of course, but it's nearly five feet wide, six feet tall, and weighs more than 800 pounds fully loaded. Some projects just don't have space for a DataVault. That's why Pepper Construction became a pilot customer for the DataVault Mobile that Knaack released this week. The mobile version dropped most of the meeting-centric features of the DataVault, along with some storage, and with that change shed nearly two feet in width and height, and nearly 500 pounds of weight. 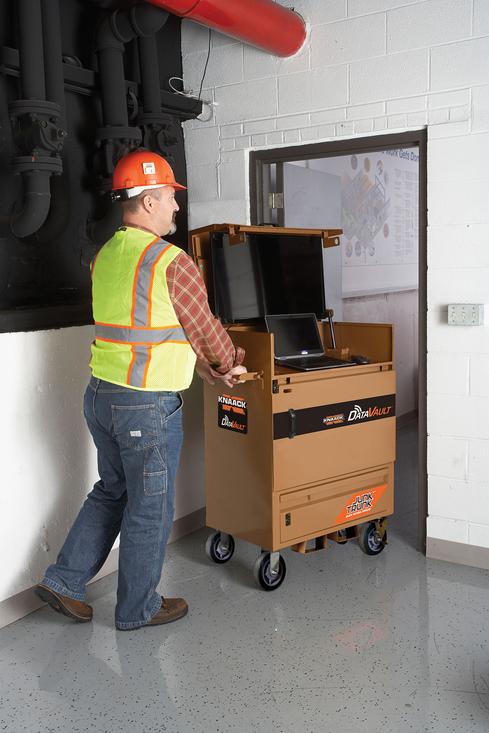 The Data Vault Mobile is intended for sub-contractors, or as the information center on smaller job sites.

Bykowski says that the smaller form factor is designed to be particularly appropriate for the many sub-contractors that do work on large jobs sites. "We had the insight from the job site that you might have multiple subs in a single room, and each has their own equipment. If each of the trades owned a Mobile, each could fit their Mobile into a room at the same time," he said. Bykowski said that some general contractors have begun requiring their subcontractors to move toward digital plans and change orders, increasing the need for a portable electronic workstation on the job site.

Modern 3D plans such as this can't easily be seen through blueprints. Digital display on the job site is becoming a necessity.

Bredeson said that, while Pepper Construction doesn't require specific electronic capabilities from its subcontractors, the advantages of electronic documents will push the industry in that direction. "We're moving to 3D information, and you're not going to get that on a blueprint," he said. Still, the move to the "electronic job site" won't come without friction from many sources. "There's a lot of tradition and a lot of human nature to overcome," Bredeson explained. The image of contractors standing around a plan table talking through changes over cups of coffee isn't modern, but it's still accurate for many job sites in 2015.

Curtis Franklin Jr. is Senior Editor at Dark Reading. In this role he focuses on product and technology coverage for the publication. In addition he works on audio and video programming for Dark Reading and contributes to activities at Interop ITX, Black Hat, INsecurity, and ... View Full Bio
We welcome your comments on this topic on our social media channels, or [contact us directly] with questions about the site.
Comment  |
Email This  |
Print  |
RSS
More Insights
Webcasts
Zero Trust for a Work-From Home World
Detecting and Preventing Insider Data Leaks
More Webcasts
White Papers
Why Add Security to Your Skill Set and How to Do It
451 Cloud Confidence Report
More White Papers
Reports
Improving Security by Moving Beyond VPN
Building an Effective Cybersecurity Incident Response Team
More Reports

@asksqn, not yet ... from my point of view it gonna take few years... until all regulation and rules be in place... for digital way... as everyone talk before about paperless office... but in gov. they still use a lot of paper...
Reply  |  Post Message  |  Messages List  |  Start a Board

@zerox203, same here interesting to know... I would like to add in my field mobile devices already did replace many testing network devices... and become all in one tool for network eng... same is started happening in other fields...
Reply  |  Post Message  |  Messages List  |  Start a Board

First, I'll say that this is a cool topic for an article, and I'd love to see more like it in the future. We talk a lot about some of the trends on offer here (mobility, 3D drafting, telepresence is not mentioned but could definitely be a factor in something like this), but there are tons of non-tech focused industries where I often wonder how this technology is actually being used there. It's nice to get a look at a convincing use case and a specific use of hardware to go along with it. E-mail is great, but it's not hard to see why it wouldn't be quite enough for a change in building plans, in an industry where time is nothing if not money. I'm curious about some specifics - what kind of hardware goes in one of these? Do they have built-in functionality for working with other mobile devices?

I would caution about the rush to make these the standard, and I was glad that you mentioned it. I'm happy to envision squadrons of renaissance man craftsmen who are equally at home with their tablets and their Sawzall, I have an anecdote to share. The father of a friend of mine is a great carpenter. Not only hardworking, but extremely talented, inventive, and ingenius when it comes to his work. I've seen him rattle off the differences between species of wood, or multiple ways to get complex jobs done, without stopping to think about it. His employer is requiring him to take online courses recently. I was over their house today helping to move furniture. He calls down for his son 'the computer crashed on me!' His son was mia so I went upstairs to take a look. His web browser had minmized to the tray and he didn't know how to get it back. Long story short, I hope they're making these things user friendly.
Reply  |  Post Message  |  Messages List  |  Start a Board

I thought that by 2015 all industries will be using IT to improve their basic process. The biggest hurdle of technology isn't the process but people's habits.
Reply  |  Post Message  |  Messages List  |  Start a Board

I love that Knack found something that seemed so foreign to its normal business and embraced it. Many companies don't have the guts. This is like Amazon getting into the cloud business. Knack (and Amazon) built an expertise through their regular business that they realized served a need in their industry. Good for them.
Reply  |  Post Message  |  Messages List  |  Start a Board

Bad news for blueprint manufacturers and printers.  Looks like another segment of the workforce has been pinkslipped permanently.
Reply  |  Post Message  |  Messages List  |  Start a Board

@kstaron, Pepper Construction is already using these on job sites and a number of other large contractors are using them, as well. With the speed at which change orders come, these days, the old system of blueprints is simply not workable any more. Speed is money on a constructions site, so the incentives for moving to this sort of system are large.
Reply  |  Post Message  |  Messages List  |  Start a Board

This sounds like a great time saver to get big projects done faster. The ability to make changes quicker helps keep the labor busy too so it would not only be a cost saving measure but more efficient so the workers you have on site have work to do that day without standing around or being sent home. Has anyone here used this type of thing on the construction site? how has it worked compared to traditional methods?
Reply  |  Post Message  |  Messages List  |  Start a Board
Editors' Choice
Hot Topics

11 Ways DevOps Is Evolving Lisa Morgan, Freelance Writer,  2/18/2021
White Papers
Why Add Security to Your Skill Set and How to Do It
How Secure Are Your Endpoints?
Intelligent Outcomes Are Key to Business Resilience
10 Must-Have Capabilities for Stopping Malicious Automation Checklist
Don't Let the Past Obstruct Your Zero-Trust Future