It turns out having a mental breakdown is a perfectly rational reaction to the stresses of IT leadership. Developing a split personality might be the only way for your IT organization to cope with the demands of digital business, according to the folks at Gartner Inc.

One of the main themes at this year's Gartner Symposium conference in Orlando, Fla., is that every business is now a technology business and every budget is now a technology budget. Gartner talks about change being accelerated at the nexus of four forces -- social, mobile, cloud, and information -- making technology integral to our lives, our businesses, and our products.

Two top Gartner analysts, Peter Sondergaard and Daryl C. Plummer, outlined the big-picture vision of transformation, with Sondergaard describing "seismic shifts" that will produce real and lasting change. Human behavior itself is changing as digital interaction becomes ever more important, to the point where the first thing many people do in the morning is interact with the virtual world through a phone or a tablet, Sondergaard said. "Nothing gets more attention than the screen, not the boss, and not the spouse -- it's OK, you can admit it."

Winning businesses must cater to digital consumers who will be quick to go elsewhere if their needs aren't met, he said.

[Be part of the solution: How CIOs Can Help CMOs Take Technology Leadership.]

The organizations that fail to transform themselves into digital businesses are doomed, but the established businesses that undertake the transformation will have to divide their attention as never before between traditional core activities and more startup-like innovation and risk taking, in Gartner's view.

The trouble is, many enterprise IT organizations are most focused on operational discipline that produces solid, predictable results. The startup culture that allows a digital business to move quickly and adapt to new possibilities introduced by mobile technology or the Internet of Things is very different and more fluid. 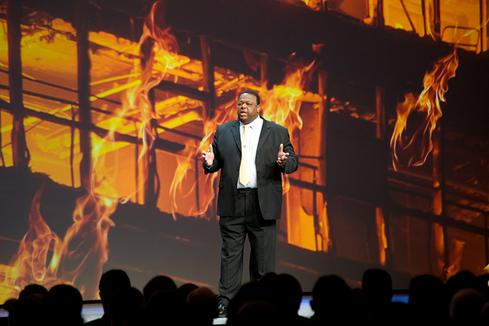 "You have to develop a split personality to be part solid and part fluid," Plummer said. The goal of making IT infrastructure rock-solid is what many people have built their careers on, but "the digital world is in constant flow," he said. "Fluidity is the fundamental quality of digital business." It's what allows a digital business "to take advantage of opportunities to leverage serendipity."

Gartner has been talking about "bimodal" strategies for application development for a year or more, but now it has upped the ante by talking about the need for the entire IT organization to be bimodal, meaning it must split its focus between the core services that make other things possible and the more exciting possibilities of digital innovation.

Smart organizations will retool their recruiting and talent development around this imperative, Sondergaard said. "You can't transform your old IT organization into a digital startup, but you can incubate one inside your business."

Those who think their organizations can't act like startups are doing themselves a disservice, Sondergaard said. "You may be thinking, 'Why should I care about digital startups running out of someone's dorm room where they're drinking Jolt cola and living on bad pizza?' But it's not just them. Your business units are acting as technology startups. That's why we're seeing a shift of demand and control away from IT and toward the business units that are closer to the customer...

"There's no doubt that the digital shift threatens many existing businesses." If a business is vulnerable, "it is inevitable that a disruptive digital competitor will accelerate the decline -- unless your organization has the courage to build new digital capabilities yourself," said Sondergaard.

Many businesses are will "put off the investment, hoping against the evidence that new digital competitors won't come along," Sondergaard said, given that the transition often means "lower margins and a major startup investment." For those who delay too long, that could be the road to extinction, he warned.

Success, on the other hand, is likely to look like "a leaner, growing, digital business with less profit -- but one that survives."

Businesses that engage in the more fluid style of technology operations will also be taking on new risks, and some of them will get burned when their shiny, new Internet of Things initiative leads them to field devices that get hacked, Plummer said. The television show Homeland featured a plot point about the hacking of a pacemaker, and incidents like that are inevitably coming. Organizations need to study the risks, do their best to minimize them, but ultimately accept them in order to move forward, he said.

He compared it to the risk of being eaten by a shark -- scary, but rare: "Bad shark attacks usually happen when someone did the wrong thing, like putting on a wet suit and swimming with seals. Here's my tip: Don't do that."

In a breakout session, Gartner analysts Bill Swanton got more into the details of how to embrace Agile development on an enterprise scale. He started by

I'll agree with the split personality part, but I'd shape it a bit differently.  IT leaders used to get by on the technical knowledge or being able to get very techical solutions built.  That's good but the thing is those IT leaders were doing more managing of projects than bringing innovative ideas.  They were presented with a problem or given a goal and turned loose.  Today those leaders need to get in the habit of being ahead of the CEO/COO, they need to be watching people and processes so that they can propose innovative changes before it is brought to them as a problem.  I used to hear often that you could either have a very technical CIO or a soft skills CIO, and a CIO lacking either was forgiven because it was just too hard to be both.  Right now I see a shift away from that forgiveness, you need the technical skills to manage a technical team but the soft skills have to be there too if you want to be a successful leader.
Reply  |  Post Message  |  Messages List  |  Start a Board
Editors' Choice
Hot Topics