IT Chief Of The Year: Bank Of America's Cathy Bessant - InformationWeek

Bessant leads BofA's 100,000-person technology and operations group as the bank scraps back from financial and regulatory disaster. Her formula: Steady, reliable performance over glitz.

Get the new Chief of the Year issue of InformationWeek.

At the bottom of the job market circa 2002, IT pros who had left Wall Street to chase dot-com riches adopted a new rallying cry: "B2B," short in this case for "back to banking." The implication? Even if financial services wasn't the hottest industry for ambitious technologists, it sure was stable.

Dial ahead a dozen years, and "back to banking" is taking on a slightly different meaning. What's back following the industry's own inglorious excesses, illegal practices, and subsequent collapse is a return to IT basics: standardized architectures and streamlined applications; a commitment to regulatory compliance and information security; and more calculated, customer-focused innovation. That approach may be short on the wow factor, but it sure makes business sense in the aftermath of the financial crisis.

The editors at InformationWeek got to thinking about the financial sectors when we started evaluating candidates for our 2014 Chief of the Year, the CIO or other IT executive who we think embodies what's good and right at the highest levels of the profession. In past years, we tended to pick chiefs at the forefront of technology innovation and business transformation -- Amazon.com CTO Werner Vogels, for instance, or then-Starbucks CIO and digital business leader Stephen Gillett. But what about someone who oversees the unglamorous heavy lifting at a top bank or investment company?

We're confident we found the right chief this year in Cathy Bessant, head of Bank of America's 100,000-person Global Technology & Operations organization. Like much of the financial industry, BofA (including acquisitions Countrywide and Merrill Lynch) did a lot wrong leading up to the 2008 financial meltdown, resulting in tens of billions of dollars in fines and legal settlements, many of them related to the sale of toxic mortgages and mortgage-backed securities. (BofA got -- and later repaid -- $45 billion in federal bailout funds.)

But we're impressed with what BofA has done ever since under the leadership of Bessant, a 32-year company veteran who was named chief of Global Tech & Operations in 2010, having previously served in various nontechnical leadership positions at the company.

In an interview at Bank of America Tower in New York City, Bessant ticks off her IT organization's four main priorities: stabilize the platform, simplify and modernize, reduce the risk (outages, performance problems, regulatory/legal violations), and improve the competitive cost position. Under a four-year plan she put into motion in 2010, BofA has retired more than 18,000 applications, many of them left over from acquisitions. For example, it's spending $100 million to consolidate five Merrill Lynch financial adviser platforms into one, a project due to be completed next year. In its wholesale banking business, 521,000 users at corporate clients in 140 countries now access its CashPro Online treasury and credit management portal in 11 languages; the portal replaced hundreds of applications and systems for everything from liquidity management to currency conversion to wire transfers. Elsewhere, BofA has consolidated 22 collateral management systems down to one. Its eight different teller systems -- now one.

[ Learn more about Cathy Bessant and her strategy: See Bank of America Tech Chief Cathy Bessant: What I Believe and How Bank Of America Taps Tech Startups.] 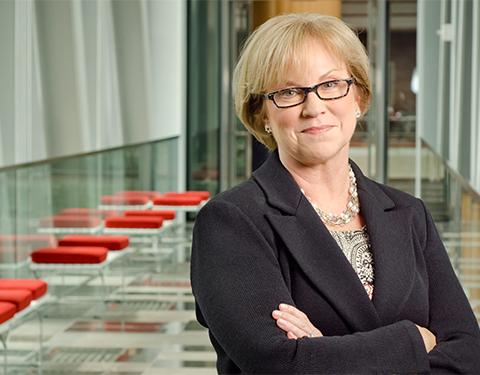 Bessant is unapologetic about her tech organization's long-term, conservative approach. Overly complex, outdated systems didn't cause the bad decisions that led to the financial crisis; simplified, modern systems won't prevent them in the future, but they do establish a foundation that improves reporting, accountability, and customer focus. Reliable systems are part of rebuilding trust in a bank that paid $17 billion in August to settle charges of mortgage fraud.

"The legacy issues in the mortgage space we are getting behind us, and we will get them behind us," Bessant says. "But if they were perceived to be part of a pattern of an inability to perform, they take on a much different proportional importance. I think it means the stakes have been really high for the technology solutions we develop to work, for our platforms to never be down."

The business disruption, and sometimes devastation, caused by the financial crisis also elevated the importance of what Bessant calls "elasticity of assets" -- network, storage, and server capacity that can scale up and down as business conditions dictate. At the same time that BofA has closed about 20 data centers under its IT consolidation, it has developed an entirely new private cloud approach it calls "software-defined infrastructure." By year's end, says infrastructure chief David Reilly, the bank will have about 7,000 workloads on that software and hardware infrastructure, housed in shipping containers to lower the company's real estate costs. BofA intends to do about 25% of its computing on that infrastructure by the end of 2015.

Creating a new data center architecture is the kind of highly technical strategy decision, grounded in BofA's changing needs in a volatile business environment, where it's valuable to have a leader like Bessant, who has worked in all aspects of the bank over three decades, Reilly says. "Cathy brings to these discussions the business perspective first, the risk perspective second, and the technology piece third," he says.

Bessant recognizes that some IT pros want no part of this methodical, cautious approach, and that her organization needs to recruit people with the right mindset. "We operate in a razor-thin-margin environment, and the idea that we are built with a 50, 60, 70% failure rate to find the one shiny object that works is just not the reality of the economic model," she says. "What you have to get a charge out of to be a technologist in banking is the commercial application of innovation. Sometimes I think the most innovative thing we do is our day-in, day-out execution against a master plan."

Shifting money to innovation
Most of BofA's work to get various sales, trading, financial, data center, and other platforms to "target state," as Bessant puts it, "is really a grind." But simplifying the infrastructure and cutting license and support costs have helped the company shift a much bigger chunk of its $9 billion annual IT budget to the kind of innovative work that excites red-blooded IT pros. BofA has doubled spending on new development since 2009, to $3 billion in 2014.

Among the innovations coming out of GT&O are ATMs, now installed in 233 banking centers, that can perform 80% of what tellers usually do, with video chat available for complicated transactions. Information security

I am on receiving end of her drastic policy of promoting non-technical people to be in charge of technology projects. Large corporations traditionally had a problem managing IT because most of decision makers don't understand technology. But policies she introduced, when inexperienced and non-technical people were trying to give orders to IT managers – just took it to a new 'absurd' level. What the point of talking about need to find best talent – when your most experienced and seasoned technology managers leaving?
Reply  |  Post Message  |  Messages List  |  Start a Board

This is a good example about a successful CIO with non-technical background. In fact to be a successful CIO, the business acumen and soft skill are more important than technical hands-on experience.
Reply  |  Post Message  |  Messages List  |  Start a Board

Gigi3: Yeah, B2B stands for business-to-business, but B2C is Back to Citibank.
Reply  |  Post Message  |  Messages List  |  Start a Board

"At the bottom of the job market circa 2002, IT pros who had left Wall Street to chase dot-com riches adopted a new rallying cry: "B2B," short in this case for "back to banking." The implication? Even if financial services wasn't the hottest industry for ambitious technologists, it sure was stable"

Rob, B2B is Business to Business or Back to Banking. The term is confusing.
Reply  |  Post Message  |  Messages List  |  Start a Board

This shows that you can excel in an IT leadership position if you can separate management from function.  Cathy Bessant clearly has the management skills needed to lead high functioning employees and it sounds like she knows when to be still and listen to what the functional experts are saying before she makes decisions.  We hear a lot about non technical leaders taking over the top IT roles as a bad thing in many cases.  I'd say she is doing a lot of things right and probably not all that differently than someone who came up from the IT side would have addressed the issues.
Reply  |  Post Message  |  Messages List  |  Start a Board

Excellent personal detail and fascintating profile of a non-technology educated CIO. Technical specialists should take note of the multiple ways Cathy Bessant talks to and meshes with the bank of which she's a part. The no-showbiz orientation, willingness to allow problems to be brought to her door and her ability to fire up the person charged with the solution speak volumes about the kind of manager she is.
Reply  |  Post Message  |  Messages List  |  Start a Board
Editors' Choice
Hot Topics