GE CEO Jeffrey Immelt shares three quick insights and explains why he sees no chance of the CIO's role diminishing.

I heard GE's Jeffrey Immelt speak last week, and I thought our IT community members would like to hear what the CEO of a $150 billion-a-year company is thinking about the economy, technology, and the role of the CIO. If anyone is trying to sell you on the diminished role for the CIO, IT organization, or technology pro, read on for a counterview.

The context: Immelt was speaking to IT leaders at a user conference for GE Intelligent Platforms, there to sell GE's software that manages and analyzes industrial data. Here are three nuggets I pulled out that I think CIOs will find interesting.

1. Economic outlook: Hunker down for more of the same
Immelt's one-sentence economic forecast: "I'd learn to love the world we're in today, because we're going to be in it for awhile." That world is characterized by relatively slow economic growth globally, with a ton of volatility.

The US is in better shape than anytime since the financial crisis, he said. China is growing, but the opportunities there are a "micro versus a macro story." Countries focused on natural resources are still investing, and there are pockets of high growth across the world, but Europe and Japan still are sluggish.

[More wisdom from GE's leader: Is 1% Improvement Boring, Or A Breakthrough?]

Overall, companies must "make their own growth, manage risks," but there are plenty of opportunities for companies that can do that, he said.

2. CIO's role: Teach business leaders to love analytics
"All our leaders are becoming as expert as possible in analytics," Immelt said.

He described a central role for the CIO in getting business leaders to use analytics more, but also the need for companies to bring in new technology skills. 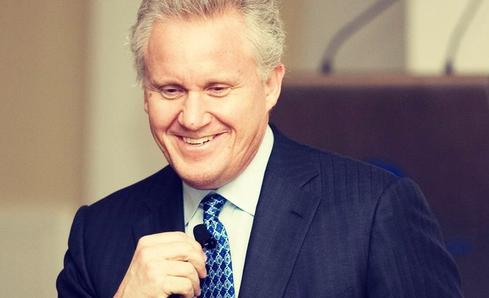 Two other nuggets Immelt shared about the role of the CIO at GE caught my attention. He's pushing his own CIOs for "more standardization in the name of flexibility," using the example of going from 600 ERP systems down to 34 (interesting that the CEO knows those numbers). And Immelt has the CIO leading GE's "factory of the future" initiative, which involves increased automation, new manufacturing techniques, and networking of sensor-packed production gear so managers can better analyze their operations and avoid breakdowns.

3. GE's three big strategic bets
"In order for us to be successful, we've got to invest in big themes," Immelt said.

GE's first big bet is on an "energy transition," particularly driven by the natural gas boom in North America and worldwide.

The second bet is on advanced manufacturing: "We think the nature of manufacturing is changing dramatically," he said. Improved automation tools, 3D printing, new materials, and the increased importance of analytical data coming off the factory floor and the supply chain mean that making stuff is increasingly dependent on IT.

The third is the Industrial Internet, GE's term for applying the Internet of Things to its industrial gear, medical equipment, and appliances.

Does Immelt's world sound like one where IT leadership, and the importance of centralized, integrated, secure information systems, are diminished? Do any of these functions sound like ones a chief marketing officer or chief digital officer is keen to take over?

Immelt focused on industries in which GE sells goods, but the demand for data-fueled business decisions holds just as true in retail, biotech, hospitality, media -- you name it. Immelt may have been selling, but I think companies had better be buying when it comes to this line: "Who uses that data the best I think will increasingly determine who's successful in the 21st century."

Chris Murphy is editor of InformationWeek and co-chair of the InformationWeek Conference. He has been covering technology leadership and CIO strategy issues for InformationWeek since 1999. Before that, he was editor of the Budapest Business Journal, a business newspaper in ... View Full Bio
We welcome your comments on this topic on our social media channels, or [contact us directly] with questions about the site.
Comment  |
Email This  |
Print  |
RSS
More Insights
Webcasts
What We Can Learn from Sports Analytics
How Elite Analyst Teams are Transforming Security with Cyber Reconnaissance
More Webcasts
White Papers
Presenting Your Cloud Security Strategy to the Board
Cloud Connectivity -- Your Guide to the Network
More White Papers
Reports
The Malware Threat Landscape
The State of Cloud Computing - Fall 2020
More Reports
Copyright © 2021 UBM Electronics, A UBM company, All rights reserved. Privacy Policy | Terms of Service