If you think an ocean cruise is about getting away from it all and unplugging from your everyday, digitally driven life, it's time to update your thinking.

Think instead about playing Xbox in the cruise ship's game room with your friends back on land. Or watching a Netflix movie while sitting poolside. Or checking Facebook to keep up with your friends, or even better, posting photos of yourself on the ship's water slide. Guests would like all of those digital capabilities, spurring cruise ships to search for new ways to provide affordable high-speed Internet access.

"With the Millennial generation, if you can't provide that kind of connectivity, you could be out of the consideration set," says Bill Martin, CIO of Royal Caribbean Cruises Ltd.

But delivering that offshore connectivity has proved to be a daunting technical challenge. The standard cruise ship satellite-based service has been slow and pricey, billed per minute. Royal Caribbean is making a big bet on an emerging satellite technology that orbits more closely to Earth than conventional satellites, while the industry's largest cruise company, Carnival Corporation & plc, recently announced a "hybrid" approach using multiple access technologies and algorithms to switch among in-port WiFi, long-range WiFi, and satellites.

[Is your IT team among the best? Apply today for the InformationWeek Elite 100 and get recognized for your achievement.]

Royal Caribbean is rolling out Internet services via next-generation satellites operated by a company called O3b, whose founding mission is to provide Internet access to the "other 3 billion" people in the world who lack connectivity.

CIO Martin (who is a member of the InformationWeek editorial advisory board) says the O3b satellite system will let Royal Caribbean provide fiber-like Internet speeds to its ships in the middle of the ocean, replacing per-minute Internet pricing with an all-you-can-surf flat rate of $22 a day, based on a weekly package, similar to fancy hotel charges. Guests will be able to access most any apps they want, including streaming video. The service is available on Royal's newest ship, Quantum of the Seas, a 4,180-passenger vessel that began sailing last week and which the company is billing as a "smart ship" for all its on-board technology. The company's Allure of the Seas ship also offers the service, and it will be on Oasis of the Seas in December. 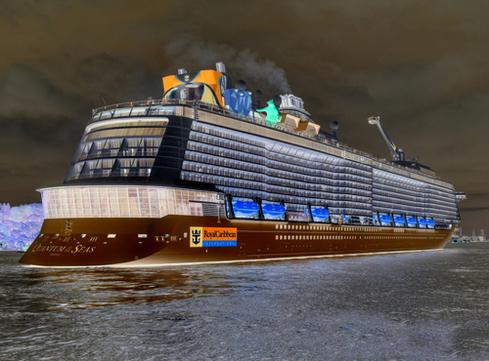 About three-and-a half-years ago, Royal Caribbean studied its onboard environment, and, Martin says, "Everything kept pointing back to, 'You need broadband access. You need high-speed access.' " So a team of communications engineers went to work on the problem, finding various ways to increase access speeds two-fold and even four-fold. Martin got to be the bad guy: "It just wasn't enough," he says. "It wasn't even close."

Then Royal Caribbean and O3b connected. O3b launched its first four satellites in 2013, but a component problem showed up on one of them. In order to make sure the next four satellites didn't have the same problem, O3b delayed the second launch from fall 2013 until July of this year. All eight satellites are now orbiting and working, at about 5,000 miles above the Earth's surface, as opposed to 22,000 miles or more for conventional satellites. O3b plans to launch a third set of four on Dec. 18.

Early tests on Royal Caribbean's Allure of the Seas ship delivered speeds of over 500 Mbit/s, and, even more important, 120- to 130-millisecond response times, meaning that even apps such as Apple Facetime and Netflix work as well as, or better than, guests experience them at home. "That's really the game-changer, the latency," says Martin, because too much latency causes apps to freeze or look sluggish. Latency is tied to the distance data travels and the speed of light. With O3b's satellites one-fourth the distance from Earth of conventional ones, transmissions can make faster round trips.

The other 39 ships in Royal Caribbean's fleet rely on conventional satellite Internet access. Two years ago, Royal Caribbean cut a deal with a new satellite access provider, Harris CapRock, to get more capacity so it at least could offer daily and weekly unlimited access packages. But they cost more than access on the O3b-enabled ships and don't have the same performance. The company is working on ways to share its O3b capacity across more of its ships and expects to be able to do that in about a year.

Martin thinks having broadband out at sea will not only attract guests who might otherwise not consider a cruise, but it will also generate priceless exposure for Royal Caribbean as guests post photos to social sites while on board. "Immediately, family and friends are drawn into the experience that you're having on board the ship," Martin says. "It's an incredible advertising opportunity for us."

New breed of satellites
The company behind the new breed of medium-Earth-orbit satellites, O3b, was founded in 2007 by Greg Wyler, who was a telecom entrepreneur in Rwanda, at the time frustrated with the lack of fiber-caliber connectivity in Africa. Rwanda got connected via ocean-floor cable long before O3b could deliver,

Chris Murphy is editor of InformationWeek and co-chair of the InformationWeek Conference. He has been covering technology leadership and CIO strategy issues for InformationWeek since 1999. Before that, he was editor of the Budapest Business Journal, a business newspaper in ... View Full Bio
We welcome your comments on this topic on our social media channels, or [contact us directly] with questions about the site.

@zaious, interesting observation as this days everyone talking about internet addiction... (or internet of things)
Reply  |  Post Message  |  Messages List  |  Start a Board

could not agree more, not only interesting point... but it could show gap from generation to generation about idea of instant WiFi- or always on.... how I see it...
Reply  |  Post Message  |  Messages List  |  Start a Board

It's an interesting point especially for some of the younger people who have never known life without connectivity,completely disconnecting maybe uncomfortable.
Reply  |  Post Message  |  Messages List  |  Start a Board

It might appeal to another demography. There are people who would be interested to sign up for the cruise, if they find that there is opportunity get connected on board. I agree that you are supposed to immerse yourself in the experience of cruising, but to some people, it might feel boring do nothing and relax.
Reply  |  Post Message  |  Messages List  |  Start a Board

There's no reason a person can't still choose to disconnect during their cruise -- it's not as if a proper cruise experience depends on connectivity, and paying for connectivity. It's just there as an option.
Reply  |  Post Message  |  Messages List  |  Start a Board

Well I do understand need to connect with today's customers I do long for the days when you took a cruise and completely disconnected. That said I think the prices for connectivity are outrageous if cruise ships hope that this will be an engagement tool for cruisers to communicate with their families and friends about the experience the cost would be prohibitive to many . The next round of innovation should look at making it much more cost-effective to the average passenger or even free .
Reply  |  Post Message  |  Messages List  |  Start a Board

This is an example of our dependence on (or addiction to) the internet. People does feel out of place when they are told that they are far from internet. It was suposed to happen anyway, they shipping lines just acted on customers' demand.

On the bright side, it is showing how far and deep the 'internet delivery' can reach. It is an aprreciable acheivement.
Reply  |  Post Message  |  Messages List  |  Start a Board

Very interesting, Chris. This is something that I find myself wondering about now and again. and even though many of us are well-read when it comes to emergent technologies, the specifics of at-sea broadband may fall a little outside of a purview. It's nice to have a primer and, just as you, this shows a very complex use case that's a great lesson for anyone. We have a) huge,  globally distributed companies serving diverse services and customers, b) a unique set of needs that prevents them from buying an off-the-shelf solution and c) a dire need of something we take for granted every day. Those are three good lessons no matter what you're selling.

As for the technology itself, that's quite fascinating as well. Satellite internet is prohibitively expensive for most consumers here on land, but for some people, it's the only option. We often equate 'boadband' with 'cable' or 'fiber' (or, more recently. 4G), but it's important to remember those are just today's tools. 'The internet' is an always-evolving set of technologies, but our dependance on it is also worth considering. We know what the endgame looks like. The smart house, the smart car, and apparently, the smart boat. Those strides don't make themselves, though, and in the meantime, a lot of companies are going to be playing catch-up deciding how and when they want to get in on that bandwagon - what parts of it they can afford, and which parts best serve their own customers.
Reply  |  Post Message  |  Messages List  |  Start a Board

The detail must be fascinating how they keep those high cost satellites working (and updated with new tech) when you don't just dispatch someone in a rusty van and toolbelt.
Reply  |  Post Message  |  Messages List  |  Start a Board
Editors' Choice
Hot Topics