Augmented Reality Is For Real In The Enterprise - InformationWeek

Google Glass got the hype, but a system used by Lockheed Martin shows how augmented reality will charge ahead in the enterprise.

Google Glass is gone for now, but augmented reality is far from dead. Companies have embraced augmented reality to help with specific tasks such as maintenance and inspections, and it seems that enterprise uses are set to keep growing.

At the recent CES 2015, augmented reality (and its cousin, virtual reality) were on display across the expo halls. The large Oculus booth had with one of the longest lines I saw all show, with people eager to try the Oculus Rift headset experience. But there were also smaller "partner" tables in hardware vendor booths, where application developers were eager to show what users might do -- are doing -- with the right pair of heads-up display glasses or goggles.

NGRAIN, based in Vancouver, was one such example. It has developed augmented- and virtual-reality applications on their proprietary platform for educational and industrial customers for more than a decade.

At CES they were one of the partner companies exhibiting at small pods in the Epson booth. There, they showed their system using the Epson Moverio BT-200 smart glasses, with an application developed on the NGRAIN platform that Lockheed Martin is using to speed maintenance on F-22 and F-35 fighter jets. 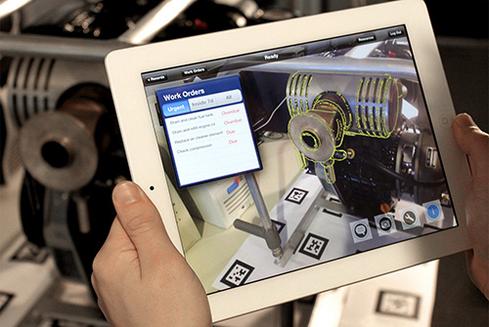 NGRAIN's augmented-reality app in use.

So is augmented reality still in the very early adopter stage? "I think that a year ago we were in the early adopter era," said NGRAIN director of product management Barry Po. "Coming out of CES I'm seeing a real shift from early adoption to a much more pragmatic technology." Po contends we're in the "second generation of glasses," and that business use-cases are moving at a much faster pace than consumer interest.

"Maintenance and construction are big areas," he said. "We can provide the information the worker needs whether they're using a mobile device or the augmented reality glasses. You can get information and step-by-step instructions right in the field on the display in front of you. You can get feedback on whether you're doing something right."

Lockheed-Martin's application is used on the F-35 and F-22 fighter programs for the company to do final fighter assessment and repair. An inspector looking at the fighter through the glasses sees part numbers and plans projected over the physical plane. The inspector then uses a handheld device to enter any defects or repairs.

"We help them automate the visual inspection and repair of the aircraft," Pos said. "This is replacing the guy with the clipboard and piece of paper walking around the aircraft." Inspection teams can log areas for repairs as they stand by the aircraft, cutting time, effort, and errors since maintenance personnel don't have to take handwritten notes back to a desk and transcribe them from paper into an electronic ticketing system.

While NGRAIN's system is available on mobile devices like tablets as well as augmented-reality glasses, companies are making decisions about which platform to use based on the nature of the worker's task. "In many areas we work with people who have large maintenance checklists, and those are perfect for tablets," Po said. "In other cases where people are working on the actual equipment, then the glasses become more important."

The nature of the task has much more to do with the platform selection than does any consideration of technology maturity. "Obviously mobile devices are more mature, but I think the gap is going to rapidly diminish," Po said.

Similar systems to Lockheed Martin's are used by the US military, and the technology has been adopted by a number of universities and technical academies to teach engineers and maintenance workers how to design and repair complex systems.

These applications aren't likely to earn the wearer "glasshole" status at the local bar, but they are pushing augmented reality forward in ways that consumer-oriented gimmick apps have not. Energy, defense, manufacturing, and healthcare are, according to Po, industries deploying augmented- and virtual-reality technology today. Perhaps Google should shift its marketing gaze in the next version of Glass.

Curtis Franklin Jr. is Senior Analyst at Omdia, focusing on enterprise security management. Curtis has been writing about technologies and products in computing and networking since the early 1980s. He has been on staff and contributed to technology-industry publications ... View Full Bio
We welcome your comments on this topic on our social media channels, or [contact us directly] with questions about the site.
Comment  |
Email This  |
Print  |
RSS
More Insights
Webcasts
Bolstering Your Enterprise Cyber Risk Assessment
Disaster Recovery/Business Continuity in the New Normal
More Webcasts
White Papers
Automate Your Cloud Compliance Journey in 6 Steps
Bandura Threat Intel Integrations Infographic
More White Papers
Reports
Enabling Enterprise Resiliency Through Cyberthreat Detection
[Tech Insights] SASE's Pandemic Boost Likely to Stick
More Reports

@Pedro, I'm at FETC -- a very large educational technology conference -- this week. In the very first large presentation, augmented reality was a huge piece of the total technology landscape under discussion. There are some amazing educational applications being brought to market -- I truly wish they had been available when I was taking some basic classes (in chemistry, for instance).
Reply  |  Post Message  |  Messages List  |  Start a Board
InformationWeek Is Getting an Upgrade!