Dan Roberts, CEO and president of Ouelette & Associates Consulting, has been coaching CIOs since 1984. Here, he shares his guidance on why courage matters in IT and offers five ways for CIOs and others to be brave in today's changing enterprise environment.

For more than 30 years, in the course of my consulting work with CIOs, we've often talked about the four C's of success: confidence, competence, commitment, and consistency. These are fundamental to the success of an individual, as well as an organization, especially when you realize that our business partners can assess these traits in a couple of minutes.

Recently, I've been hearing CIOs talking a lot about the importance of incorporating a fifth "C": courage.

Business today moves faster than ever, and with it the pace of change. I talk with dozens of IT leaders in any given month, and we’re pretty much all surfing in a tsunami. That might sound like a crazy idea, but once you're on the board, you're sure going to need some courage. For business and IT leaders, that courage can be highlighted in five particular areas.

Want to learn more? Dan Roberts will be sharing his insights during the Leadership Track at Interop Las Vegas, May 2-6. Register now!

Courage To Burn The Ships

Hernan Cortes motivated his conquistadors to march into Mexico by burning the ships when they landed. The message: Go forward or die. In the context of IT leadership, where guiding your workforce through organizational change is often a bigger challenge than actually implementing new technology, there's no toe-in-the-water approach. A sizable chunk of your workforce won't embrace the new way of doing things until the old way is ashes. To the degree that business continuity and security practices allow, go all-in as quickly as possible.

I compare the ever-increasing demands on IT to the role of an NFL quarterback. During his rookie year, any QB will say, "Wow -- the game is so much faster than college ball." But that's the game he has to play. Check back in his fourth year, and the game won't have gotten any slower -- but his ability to react to high-speed uncertainty will have grown exponentially. As an IT leader, you will never have all the time you'd like to make a decision, but you must get comfortable playing the game -- because it's not going to slow down.

Courage To Say "No"

IT is terrible at this. Either we don't say no at all and distracting, low-value efforts undermine strategic initiatives, or we say "no" in such a graceless, knee-jerk way that the organization loses respect for us. IT has, in other words, a terrible tact record. 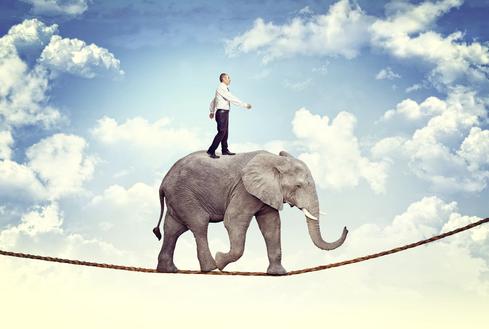 When I coach IT leaders on how to say no, I start with:

Courage To Know When To Speak Up

The key word here is not "speak," but "when." That's a two-part equation: First, know when you have to speak your mind, and, second, have the courage to do so. That includes entering the political fray, because as unpleasant as that can be, it's those political dynamics that often derail our success.

But also (and usually first), have the courage to hold your tongue and listen. Really listen: Hear the words, empathize with the need, analyze the potential, and only then, respond with tact.

Courage To Market IT

IT often sees "marketing its value" as tasteless showmanship. But it's really a matter of how you create awareness of what IT brings to the organization. That's a question you want to answer before your next budget cycle. Be proactive in communicating IT to business units, the C-suite, and your board -- in terms those business leaders understand.

Also, remember that every time your IT staff interacts with the rest of the organization, they're moving the needle on your reputation, building your brand one way or the other. Make sure your team remembers it, too.

When I talk to people about courage, I start with a short exercise. I ask them to think of two or three people in their lives -- personal or professional -- who've demonstrated real courage. When I press for details, the specifics vary, but one factor is always present: Fear. There was always something tremendous at stake, and taking action required the individual to conquer fear.

Without fear, there's no courage. So, as daunting as it can be to leap into the unknown, to make high-stakes decisions under pressure, to tell your CEO "no," or to market IT's value, remember that where there is fear, there's something to lose. And that's where courage can help you win.

Dan Roberts has authored and is a contributing author of numerous books. His latest two, Unleashing the Power of IT and Confessions of a Successful CIO, were on Amazon's list of top-rated books for months, and are being leveraged by IT Leadership Teams as a model for moving ... View Full Bio
We welcome your comments on this topic on our social media channels, or [contact us directly] with questions about the site.
Comment  |
Email This  |
Print  |
RSS
More Insights
Webcasts
Cybersecurity's Next Wave - What Every Enterprise Should Know
How Elite Analyst Teams are Transforming Security with Cyber Reconnaissance
More Webcasts
White Papers
A Technical Deep Dive on Software Exploits
2020 Threat Hunting Report
More White Papers
Reports
Assessing Cybersecurity Risk in Todays Enterprises
2021 Top Enterprise IT Trends
More Reports