No matter what industry you're in, artificial intelligence is likely to affect your job. Here's how.

As artificial intelligence invades more and more aspects of our lives, one of the big questions on everyone’s mind is how it will affect our jobs. Will we eventually enjoy the luxury of working just a few hours a week while bots handle all the most disagreeable chores for us? Or will AI systems take all the good jobs, leaving human beings in a permanent underclass?

According to the World Economic Forum (WEF) report on The Future of Jobs 2018, machines currently handle about 29% of tasks across the 12 industries studied. By 2022, 42% of all tasks and 62% of data processing and search likely will be handled by machines and algorithms. That’s a dramatic shift over just four years, and it could have a very noticeable impact on day-to-day work activities.

A separate study from LinkedIn found that AI is already having an impact on the business world. For starters, more people are adding AI skills to their resumes. LinkedIn found that the number of people listing AI skills on their profiles has climbed 190% since 2015. In addition, the professional social networking site found that jobs that are easy to automate — jobs like administrative assistant, customer service representative, accountant and electrical/mechanical technician — have seen the biggest declines over the last five years.

A third study, Cognitive Diversity: AI and the Future of Work, conducted by vendor Tata Communications and Ken Goldberg, professor of engineering at the University of California, Berkeley, delved deeper into the issue by surveying 120 global business executives. It asked these thought leaders, many of whom are directly involved in integrating AI into the workplace, how they believe the technology is going to change the way business gets done.

For these leaders, the key question was not whether machines would take over for humans but how AI and humans would work together in new ways. The following slides provide more detail on how business executives believe AI will transform the future of work.

1. AI will allow teams to be more productive and efficient.

Almost all of the business leaders — 99% of the 120 people surveyed by Tata— believed that AI would help increase productivity and efficiency. Since the creation of the first wheel, technology has played a role in increasingly human productivity, and many business leaders see the adoption of AI as an extension of a trend that stretches back through recorded history. The WEF report concluded, “The rise of workplace automation in its many forms has the potential to vastly improve productivity and augment the work of human employees. Automation technology can help remove the burden of repetitive administrative work and enable employees to focus on solving more complex issues while reducing the risk of error, allowing them to focus on value-added tasks.”

2. AI will have a positive impact on decision-making. 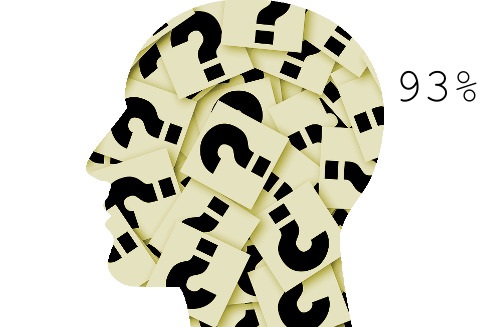 A vast majority of the leaders surveyed (93%) also believe that AI will improve decision-making. Many are making that judgment based on their experience with big data analytics tools that incorporate machine learning. Enterprises are already using these systems to become more data-driven and to respond more quickly to changes in the market.

Interestingly, a smaller majority (63%) also believe that AI will help negate unconscious bias in decision-making. The theory is that because machines are free from societal forces, they won't share the same unconscious stereotypes and prejudices that color human thinking. In practice, however, AI systems sometimes adopt the attitudes of their developers or humans with whom they interact. In fact, IBM believes this is such a problem that it released a cloud-based tool designed to spot bias in AI systems.

In the Tata Communications study, 83% of respondents said that they see customer experience and engagement as one of the positive outcomes of AI. Already, many companies use recommendation engines powered by machine learning to suggest products or services that may interest their customers. In addition, some companies are experimenting with chatbots that can respond to some questions either online or over the phone. Others have invested in customer relationship management (CRM) tools with AI capabilities that can guide sales and customer service representatives in their interactions with customers and prospects. All of these applications of AI tend to improve customer experiences.

An overwhelming majority of those surveyed by Tata Communications said that "cognitive diversity" is very important for teams. In other words, they believe that having a wide group of people with different attitudes, opinions and experiences can help them make better decisions. However, assembling these teams, whether from within the company or from outside the company, can be very difficult.

Eighty percent of those surveyed said they believed that AI had an important role to play in identifying people who might make good contributions to teams. In addition, it's possible that an AI might have a role as one of the team members. For example, systems can already be trained to function as a "devil's advocate," suggesting alternate points of view that might be difficult for human members of the team to vocalize or consider.

5. AI will create new roles in the business.

When it comes to the big questions of AI — whether AI will take away human jobs — the participants in this survey came down decidedly in favor of AI being good for jobs. Three quarters said that they believe AI will create new jobs.

The LinkedIn study found that some of the fastest-growing jobs over the past five years are occupations that are directly related to artificial intelligence (software engineer, user experience), roles that can be augmented by AI (marketing specialist, human resources specialist, marketing manager, recruiter, data analyst, human resources consultant) or jobs that require a high degree of interpersonal skills (real estate agent, account manager).

The WEF study projected these trends into the future and predicted that the top ten emerging jobs through 2022 will include the following:


6. Workers will need new skills in the next five years.

On the other hand, most of the experts surveyed by Tata Communications recognized that everyone is not equally equipped to take advantage of these new roles that will be created by AI. In fact, 71% agreed that some retraining of workers would be necessary.

7. AI will increase market-share and profits.

A majority (57%) of those surveyed by Tata believed that AI would ultimately have a positive impact on market share and profits. Given that 99% of respondents believed that artificial intelligence would improve efficiency and productivity, it's somewhat surprising that this number isn't higher. It's possible that respondents are concerned that the difficulty in implementing AI and machine learning solutions may cut into the potential profits. It's also possible that AI could become such a standard part of doing business that organizations will not see any competitive advantage as a result. AI could simply become "table-stakes," something every business has to have to stay in business, like a phone or a computer is today.

While Tata's experts believed that AI would create new jobs, they also believed that AI would take over some existing jobs. However, the survey respondents don't appear to view this as an entirely negative phenomenon. In fact, 54% of of those surveyed said that they hope AI will do some of their current tasks. For these respondents AI is not so much a threat as an opportunity to unload some of the tasks that they currently dislike doing.

According to the WEF report, while AI will likely create 133 million jobs, it will also likely eliminate 75 million jobs. The top ten declining roles through 2022 are forecasted to include the following:

Because business is an inherently risky venture, these human failings make it all too possible that leaders will play it safe when they should be more aggressive or that they will expose the company to more liability than is prudent. The hope is that data-driven AI will be better at making decisions — or at least recommendations — related to business risk. Still, as previously noted, the possibility persists that AIs will adopt the prejudices and shortcomings of their human creators.

10. AI may reduce the size of our workforce.

Just over a quarter of those surveyed (28%) believed that AI may actually reduce the size of the human workforce. Most people believed it would be more likely that while AI will eliminate some jobs, the net result on overall employment would be positive.

For support of this idea, the Tata report cited an earlier McKinsey report, which said, "Even when machines do take over some human activities in an occupation, this does not necessarily spell the end of the jobs in that line of work. On the contrary, their number at times increases in occupations that have been partly automated, because overall demand for their remaining activities has continued to grow. For example, the large-scale deployment of bar-code scanners and associated point-of-sale systems in the United States in the 1980s reduced labor costs per store by an estimated 4.5 percent and the cost of the groceries consumers bought by 1.4 percent. … But cashiers were still needed; in fact, their employment grew at an average rate of more than 2 percent between 1980 and 2013."

Want to learn more about AI and machine learning in the enterprise? Check out these recent articles.

How Enterprises Can Scale their Machine Learning

Where AI Can Turn 'Buzz' into 'Biz' Today

Cynthia Harvey is a freelance writer and editor based in the Detroit area. She has been covering the technology industry for more than fifteen years. View Full Bio
We welcome your comments on this topic on our social media channels, or [contact us directly] with questions about the site.
Comment  |
Email This  |
Print  |
RSS
More Insights
Webcasts
Building Asset Management into Your Enterprise Security Strategy
Cybersecurity Risk Management
More Webcasts
White Papers
Simplify Your Application Security
ITSM for the Enterprise - What Makes it Work?
More White Papers
Reports
The State of Endpoint Security
The State of DevSecOps Report
More Reports
Copyright © 2021 UBM Electronics, A UBM company, All rights reserved. Privacy Policy | Terms of Service