Professional sports leagues the NFL, NHL, NBA, and MLB are all leveraging analytics and IoT in their efforts to improve the games. Here's an overview. 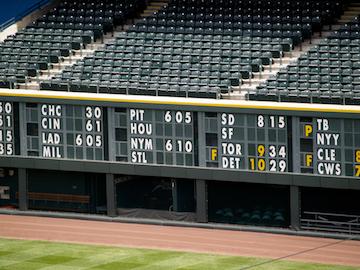 In my last sports-related post, I explained how the National Hockey League (NHL) is using IoT devices to provide the league with deeper insights about the players and the game while immersing fans in new stats and spectator experiences. The NHL is not alone. In fact, IoT devices are finding their way into all kinds of sports for the benefit of leagues, players, and fans.

For example, the National Football League has been placing sensors in player's shoulder pads to track their location, speed, and distance traveled. Last year, it experimented with sensors in footballs to track their motion, including acceleration, distance, and velocity. That data is being sold to broadcast partners.

The Golden Gate Warriors and Miami Heat are getting some interesting data from wearables and other sensors that track the movement of players and the basketball used in a game. Now it's possible to analyze how players shoot, how high they jump, and the speed at which the ball travels, among other things. One thing that trips me up about it is how some of that data is visualized by the coach.

Picture this: The player clips a device to his shorts or wears the device on his wrist so his coach can understand the trajectory of the ball and get statistics about a player's movements on a cell phone. The new insights help coaches and their teams understand the dynamics of the sport better, but I wonder how practical Basketball by Smartphone App is, given the speed at which the game is played.

Sensors placed somewhere on the players and in the basketball also provide information about players' movements on the court over time. The visualization looks a like a plate of spaghetti, but within that are patterns that reveal players' habits, such as the area of the court the player tends to favor.

Former Oakland A's general manager Billy Beane is considered the father of sports analytics because in 1981 he was the first to change the makeup of a team and how a team played the sport based on what the numbers said. This is commonly known as "Moneyball" (thanks to the book and movie) or "Billyball."

One interesting insight was base time. The more time a player spends on-base, the more likely that player will walk to first base rather than strike out.

However, Beane's early experimentation also demonstrated that numbers aren't everything. He was fired the next year (in 1982) for overworking pitchers. Stated another way, the stellar turnaround year was not followed by a similarly strong year.

These days, sensors are enabling Major League Baseball (MLB) statistics 2.0. For example, sensors in baseball bats provide insights about the speed and motion of a swing and the point of impact when a ball hits the bat. In the dugouts, coaches and players can get access to all kinds of insights via an iPad during the game. The insights enable them to fine-tune the way they play against the opposing team. It's also possible to track the movements of a specific player.

Have You Noticed a Difference?

Analytics are helping sports teams play their games more effectively and die-hard fans are getting more of what they crave -- insights.

We welcome your comments on this topic on our social media channels, or [contact us directly] with questions about the site.
Comment  |
Email This  |
Print  |
RSS
More Insights
Webcasts
Detecting and Preventing Insider Data Leaks
Optimizing App Performance in the Cloud
More Webcasts
White Papers
Why Add Security to Your Skill Set and How to Do It
How Secure Are Your Endpoints?
More White Papers
Reports
Key Strategies for Managing New Risks in Cybersecurity
Are We Cyber-Resilient? The Key Question Every Organization Must Answer
More Reports