Inside Eight Game-changing MOOCs
(click image for larger view and for slideshow)
David Evans has been the first instructor for hundreds of thousands of students pursuing their education at Udacity, the massive open online course (MOOC) platform whose unique style he helped define.

His Introduction to Computer Science course was one of the first two developed specifically for Udacity, along with an AI for robotics class taught by CEO Sebastian Thrun, drawing on examples from his work on Google's self-driving car.

A faculty member at the University of Virginia, Evans returned to teaching there in January following a year-long sabbatical to work with the Udacity team. He said the university supported him in his enthusiasm for the project, but it does not have a relationship with Udacity the way it does with Coursera.

Those who complete Evans' introductory programming course may not be quite ready for robotics engineering, but they will have built their own simple search engine in the Python programming language, which they learned along the way. For example, string manipulation functions are taught in the context of creating a web crawler that finds all the links on a web page, and the introduction to arrays is tied to the problems of organizing and sorting data. Udacity provides a code editor and interpreter, built into the Web experience, which allows students to write and test their own code and submit it for automated grading.

[ Students aren't the only ones who stand to benefit from MOOCs. Read MOOC-utopia: Who Really Wins? ]

The project-based approach taken by many Udacity courses is driven by interesting problems for students to solve, Evans said, something that's often lacking in a traditional academic setting where you have more of a captive audience. He and the course designers from Udacity started with the understanding that they would need to work hard to keep students engaged, and they rarely present more than five minutes of video lecture before offering a quiz or programming exercise.

Online video sites like YouTube indulge our short attention spans with limitless choices, until "anything more than a minute starts to seem like forever," Evans said. Online courses exist in that same environment. "It's a very different medium from sitting in a traditional lecture hall." 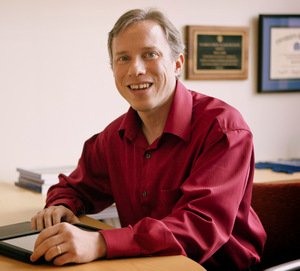 Thrun is the bigger computing star on many levels, and the concept for Udacity came from his previous experience teaching a free online Introduction to Artificial Intelligence course with Google research director Peter Norvig. That offering enrolled about 160,000 students in 2011 and is still available today on Udacity, complete with the original (slightly less polished) videos. But Evans' CS101 course is the most popular offering on Udacity, partly because it's more accessible to beginners. You'll see his smiling face at the top of the home page and the top of the course listings page.

Evans also developed a Udacity course in cryptography, which is one of his specialties, but part of what makes his basic computer science course compelling is the enthusiasm he brings to it. "For me, it's really the most exciting computer science class," Evans said.

Computer science is also probably more suited to this form of online instruction than a subject like poetry, according to Evans, because with programming it's possible to present students with "an open-ended creative problem that you can grade automatically." For example, students who are challenged to define a function that will produce a given output given a specified input, and they can each come up with their own solutions, which may be substantially different. As long as they all give their function the same name, the course software can still grade their work by passing it a series pre-defined test cases.

Evans is proud of the stories Udacity is accumulating of MOOC students who have gone on to get programming jobs they never would have landed otherwise -- including a retail clerk and a high school math teacher.

The former retail clerk, Neil Sutcliffe, had been working for a Wal-Mart subsidiary in the U.K. He doubled his salary without the need for a bachelor's degree because what he learned in the class -- combined with Evans' emphasis on the idea that part of computer science is learning how to use new tools -- equipped him to further self-study in C# and ASP.NET and start creating games, which he used to sell his skills to a new employer. "I've always been interested in programming, but never found a course that taught you by doing, and never found that next step," he wrote in a Udacity blog post.

Udacity has also seen its share of setbacks, such as the recent announcement that San Jose State University suspended a program to offer credit-bearing courses in partnership with Udacity because of low pass rates. However, Thrun argues the results were partly a factor of serving remedial students who either weren't currently enrolled or had previously flunked the on-campus version of the course.

Although he wasn't involved in that experience, Evans said he hopes it won't be the end of efforts to find a scalable way of offering entry-level and remedial courses online. That's a worthwhile goal that could have a huge impact, he said, but it's not an easy one. "It's not surprising to me that it wasn't a complete success the first time it was tried."

Have you taken a courses on Udacity? How do they compare, in your opinion?
Reply  |  Post Message  |  Messages List  |  Start a Board

One of the things I see with Udacity is it really does business as a sort of Google spin-off, with many top execs coming from Google.

It is one of the MOOC platforms organized as a for profit corporation, as opposed to edX which is a nonprofit consortium of universities. Clay Shirky says that's what really worries him about MOOCs -- not that the quality isn't good but that the corporate influence will be negative.