Twitter announced the beta launch of Promoted Video, a new ad type that will charge advertisers on a cost-per-view model.

Twitter users: Your stream is about to get a little busier. The social network announced this week that it will launch a beta version of in-feed video ads, called Promoted Video, to help marketers reach a broader audience.

The video ads will not auto-play when you scroll through your feed, unlike their Instagram and Facebook counterparts. As such, Twitter is offering this new ad format in a cost-per-view buying model, which charges advertisers only when a user clicks Play.

Twitter's Promoted Video launch follows a test this year of a video-playback feature called Video Cards. During this test, Twitter found that embedded video in tweets generates more engagement and views, it said in a blog post.

Promoted Video also builds on its Twitter Amplify program, which lets companies embed images and video from TV into tweets. The NCAA, for example, used Amplify to promote March Madness basketball highlights. Other Amplify partners include the NFL, American Express, and Viacom, according to its website. 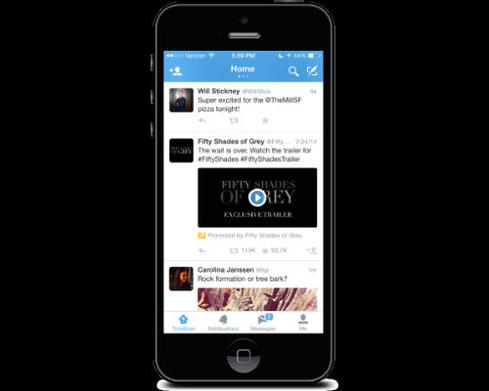 Advertisers that use Twitter's video ads will have access to analytics, including completion percentages and a breakout of organic versus paid video views. "By using Promoted Video, it's easy for brands to upload and distribute video on Twitter, and to measure the reach and effectiveness of this content," the company said in a blog post.

Despite Twitter's strong ad performance, the company raised concerns this year about its growth potential. In March, the research company eMarketer found that Instagram surpassed Twitter in monthly active mobile users in the US. In April, Twitter revealed disappointing user growth. Promoted Video will give Twitter another potentially lucrative revenue stream, but it could also prove to advertisers that, despite slow growth, users are still engaged.

In addition to its latest advertising offering, Twitter has started testing the e-commerce waters. In May, the company announced a partnership with Amazon that lets you shop from your Twitter feed by using a hashtag that places the item in your Amazon shopping cart. Most recently, the social network announced the acquisition of CardSpring, a payments infrastructure company that lets merchants create credit-card-linked promotions.

Kristin Burnham currently serves as InformationWeek.com's Senior Editor, covering social media, social business, IT leadership and IT careers. Prior to joining InformationWeek in July 2013, she served in a number of roles at CIO magazine and CIO.com, most recently as senior ... View Full Bio
We welcome your comments on this topic on our social media channels, or [contact us directly] with questions about the site.
Comment  |
Email This  |
Print  |
RSS
More Insights
Webcasts
Strategies for Success with Digital Transformation
Making Cybersecurity Work in Small and Medium-Sized Businesses
More Webcasts
White Papers
From MFA to Zero Trust
Threat Intelligence Solutions: A SANS Review of Anomali ThreatStream
More White Papers
Reports
How Data Breaches Affect the Enterprise (2020)
The State of Cloud Computing - Fall 2020
More Reports

Good point, the possibilities increase by the use of video, but at the same time, limitations are also created. For example, users have a very good idea of the current level of CGI capabilities and if the graphics are lacking then, users might think that the video contains information that is outdated. This problem is further compounded by the fact that videos cannot be edited and updated with newly researched data, unless the sources files are available.
Reply  |  Post Message  |  Messages List  |  Start a Board

Agreed. I hope the ease witth which video can be introduced now doesn't supplant text based information, as it's simply a better resource for certain things and can allow you to learn in different ways than a video can.

Sometimes, being able to read and reread the same bit of information in your own time and at your own pace can be very important.
Reply  |  Post Message  |  Messages List  |  Start a Board

@Brian that's the way I see it. I even skip recipes that are only presented in video format rather than written out. I can understand some people wanting to see a certain technique illustrated, but I'd still rather have all the info in text available.
Reply  |  Post Message  |  Messages List  |  Start a Board

@Ariella, agreed. Articles and documentation are better at communicating the value behind a product and/or service. Videos can also be good, sometimes a computer generated video is important to illustrate the model of a product, but then again, the video would need to be backed by documentations for further research and reviews.
Reply  |  Post Message  |  Messages List  |  Start a Board

I like that the ads aren't auto-play. That's probably my biggest complaint with Facebook's video ads (even though you can set them not to play unless you're connected to wifi). Tends to make my phone run small when I scroll past one that starts playing.
Reply  |  Post Message  |  Messages List  |  Start a Board

Well at least they don't auto-play. I'm just starting to see sponsored posts on Instagram -- pictures only, haven't see any videos yet. It feels like it's the beginning of the end of Instagram's run as the new cool kid. But ads are inevitable and necessary -- as long as they stay out of the foreground.
Reply  |  Post Message  |  Messages List  |  Start a Board

I can't say I'm surprised. As videos are seen to be very effective for marketers, it's now onder they want to get them on Twitter. But I don't click on video ads or even a lot of video clips used for news. I prefer articles.
Reply  |  Post Message  |  Messages List  |  Start a Board
Editors' Choice
Hot Topics