Not everyone can get it right all of the time -- these businesses included. In honor of Twitter's birthday, here's a look at eight unforgettable Twitter fails.

Eight years ago Friday, Twitter cofounder Jack Dorsey published the microblog's first-ever tweet: "just setting up my twttr." Three days later, he uploaded an early sketch of the service to his Flickr account and detailed the evolution of his project, which began in 2000.

One night in July [2000] I had an idea to make a more "live" LiveJournal. Real-time, up-to-date, from the road. Akin to updating your AIM status from wherever you are, and sharing it. For the next 5 years, I thought about this concept and tried to silently introduce it into my various projects... The idea has finally solidified... and taken a novel form. We're calling it twttr... It's evolved a lot in the past few months.

Since then, more than 240 million users have joined the service and send more than 500 million tweets each day. For brands, Twitter has become an indispensable communication tool, though not without some very memorable missteps.

1. McDonald's hashtag goes awry
McDonald's meant well when it launched a campaign in 2012 to promote the hashtag #meetthefarmers. McDonald's intended it to draw attention to the company's fresh produce guarantee. Later that day, it published a tweet that read, " 'When u make something w/ pride, people can taste it,' McD potato supplier #McDstories."

It was that second hashtag that took off on Twitter and led to thousands of people tweeting McDonald's horror stories and other snarky posts. A statement from the McDonald's social media director explained that the promotion did not go as intended:

While #meetthefarmers was used for the majority of the day and successful in raising awareness of the Supplier Stories campaign, #mcdstories did not go as planned. We quickly pulled #mcdstories and it was promoted for less than two hours. With all social media campaigns, we include contingency plans should the conversation not go as planned. The ability to change midstream helped this small blip from becoming something larger.

2. JPMorgan Chase cancels Q&A
JPMorgan could have learned a thing or two from McDonald's hashtag fiasco when, last November, it asked followers to send questions to an executive using the hashtag #AskJPM.

The company said it was an opportunity for college students to communicate with an executive. What the company didn't expect was the barrage of angry and snarky posts, including "Can I have my house back?" JPMorgan Chase cancelled the Q&A.

In 2011, Chrysler's official Twitter account posted a tweet that used inappropriate language and condemned Detroit drivers. The employee, who worked for the agency New Media Strategies, reportedly had a bad commute to work -- and presumably an even worse commute home after he or she was fired. 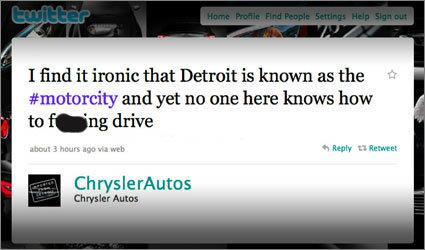 Chrysler later fired the agency, too, and NMS's CEO apologized: "New Media Strategies regrets this unfortunate incident. It certainly doesn't accurately reflect the overall high-quality work we have produced for Chrysler. We

Comment  |
Email This  |
Print  |
RSS
More Insights
Webcasts
Nip Ransomware in the FUD: Detecting Attacks Pre-Encryption
Cybersecurity's Next Wave: What You Should Know
More Webcasts
White Papers
Why Add Security to Your Skill Set and How to Do It
Sunburst: Impact and Timeline
More White Papers
Reports
Improving Security by Moving Beyond VPN
The State of Threat Detection and Response
More Reports

"Once upon a time, SMS messages were capped at 160 characters. Because Twitter was so relient on SMS it capped its character count at 140 to leave room for usernames when people retweeted messages. Voila!"

Ohh! It took you 203 characters to tell the story of Twitter. :) Sometimes it would be useful to be allowed a few more characters.

I know someone who said he might write a novel on Twitter, 140 characters a day. It could take him about three years to complete the project. :D

"What's really fascinating is when companies make the same mistake twice. You have to wonder why they didn't learn the first time..."

Yes, it's amusing. :D I wonder if they keep a record of their social media mistakes. Maybe not. They should have someone with some knowledge in behavioural sciences deal with the Twitter accounts.

Once upon a time, SMS messages were capped at 160 characters. Because Twitter was so relient on SMS it capped its character count at 140 to leave room for usernames when people retweeted messages. Voila!
Reply  |  Post Message  |  Messages List  |  Start a Board

What's really fascinating is when companies make the same mistake twice. You have to wonder why they didn't learn the first time...
Reply  |  Post Message  |  Messages List  |  Start a Board

I thought his "twttr" reference was amusing, too. He understood how precious each of those 140 characters would be before everyone else.
Reply  |  Post Message  |  Messages List  |  Start a Board

"Powerful tools require responsibility, and these are some instances where that power is not wielded properly."

Exactly. When you go through the cases Kristin mentions you can't help but laughing. Well, I did. Then, you think we are talking about businesses here, not kids, and you want to cry. :D

One of my observations on Twitter has been that since Twitter exists, almost 240 million users have downgraded their grammar, spelling, and punctuation.

One of the most annoying things is the omission of vowels. So, it was Twitter's co-founder who introduced this by twitting "twttr". Ha!

Good update and its true, lot of improvements to be done,.
Reply  |  Post Message  |  Messages List  |  Start a Board

Great article. These examples prove how Twitter has developed into a platform for people to say what they want to. That doesn't always work to great results, but that's the point.

Powerful tools require responsibility, and these are some instances where that power is not wielded properly.
Reply  |  Post Message  |  Messages List  |  Start a Board
Page 1 / 2   >   >>
Editors' Choice
Hot Topics