Just hours after introducing a new blocking policy on Thursday, Twitter rescinded it after users bombarded the social network with complaints.

According to the policy, people you blocked would still be able to see your tweets and follow you. Critics complained because the new rules allowed harassers to continue tracking a person's updates even if that person had blocked them.

Under the short-lived changes, blocked users were still able to retweet and favorite your posts. This meant that the only way to prevent someone from following you would be to change your account to private.

Twitter said that the changes were made to prevent retaliation scenarios in which users discovered they had been blocked and would find other ways to harass the user, which often prompted more abuse.

As criticism from angry users flooded in, even Twitter CEO Dick Costolo responded to tweets, attempting to explain the change. 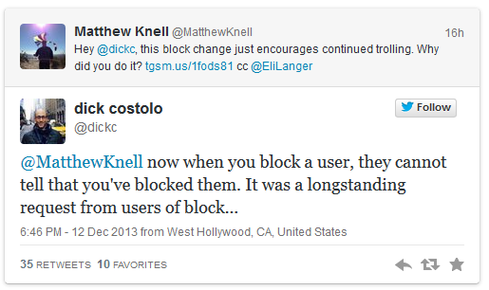 Hours later, Twitter VP of Product Michael Sippey announced it would retract the changes and further explained its reasoning.

"In reverting this change to the block function, users will once again be able to tell that they've been blocked. We believe this is not ideal, largely due to the retaliation against blocking users by blocked users (and sometimes their friends) that often occurs. Some users worry just as much about post-blocking retaliation as they do about pre-blocking abuse. Moving forward, we will continue to explore features designed to protect users from abuse and prevent retaliation."

Under its current blocking policy, blocked users can't: Add your Twitter account to their lists; have their @replies or mentions show in your mentions tab (though they still may appear in search); follow you; or see your profile picture on their profile page or in their timeline.

If your Twitter profile is set to public, your tweets will still be visible on your public profile page to anyone, regardless of whether they have a Twitter account. Twitter said that although it does not notify users when you block them, the blocked user might discover it on his own because he will no longer be able to follow you.

Senior Editor Kristin Burnham covers social media, social business and IT leadership and careers for InformationWeek.com. Contact her at [email protected] or follow her on Twitter: @kmburnham.

We welcome your comments on this topic on our social media channels, or [contact us directly] with questions about the site.
Comment  |
Email This  |
Print  |
RSS
More Insights
Webcasts
Unlocking the Ultimate Source of Truth in Cloud Security--Network Data
Using Artificial Intelligence, Deep Learning and Machine Learning for Cyber Defense
More Webcasts
White Papers
DevOps for the Database
How to Build Your Own CDN
More White Papers
Reports
The Future of Multi-Cloud Networking 2020
Special Report: Edge Computing: An IT Platform for the New Enterprise
More Reports

Only good thing about the whole scenario of introducing and retracting the new policy is that it didnt take long Twitter to realize the mistake. As for the short lived blocking policy, it was against the very concept of blocking.If Twitter is really concerned about the harassment and abusing by blocked users, there must be some other way of preventing it as suggested by Lorna and Paul (though I have reservations about that).
Reply  |  Post Message  |  Messages List  |  Start a Board

@ Lorna Garey, first we need to come clean on this ourselves. If we want to block someone from following us, we should have the courage to declare it. If the person we want to block is so important that we don't want to annoy him by letting him know that we have blocked him, then there is no point in blocking him at all.
Reply  |  Post Message  |  Messages List  |  Start a Board

@Lorna.. i was thinking the same. Why can't twitter do both? I can se ethe need to block someone but not want that person to know.
Reply  |  Post Message  |  Messages List  |  Start a Board

I think transparency about how the service is working is better than concealing the fact that one is blocked.
Reply  |  Post Message  |  Messages List  |  Start a Board

Why is it so very difficult for social media platforms to understand that users don't want to be trolled/flamed/stalked/harassed? LinkedIn is notorious for not having blocking of any kind and yet here is Twitter removing the blocking and then acting surprised when user backlash ensues. Most don't want to be pursued by unstable individuals. Why is this concept so very hard to grasp?
Reply  |  Post Message  |  Messages List  |  Start a Board

While at first blush that change seemed strange, Twitter's rationale does make sense. Maybe it could offer this as an option: Block and hide, or avoid letting the blockee know about the action.
Reply  |  Post Message  |  Messages List  |  Start a Board
Editors' Choice
Hot Topics