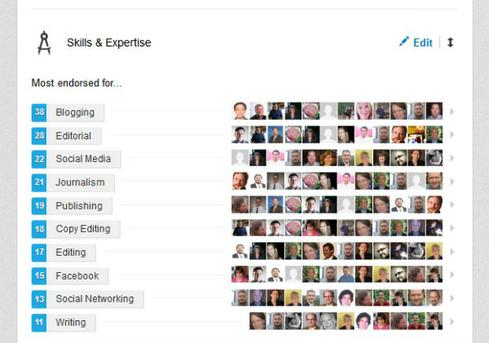 LinkedIn user Anna Rihtar quit her job after a coworker sexually assaulted her in the workplace. She thought that leaving her job would end the problem. Instead, she said, the perpetrator stalked her through email, voice mail, and the only social network that did not include a block-user feature, LinkedIn.

"I could ignore emails, delete voicemails, block Facebook, use privacy settings on Twitter -- yet every day I was being looked at on LinkedIn," she said. "It really started hitting close to home when he started researching my new connections to see where they were located. If they were in a different area than where I worked for him, he would email me to see if I moved and what I was doing. Little things like that started getting me really scared."

Rihtar's wasn't the only case of stalking on LinkedIn. A thread on the social network dating back to last spring shows a number of similar experiences. One user reported being stalked on LinkedIn by a convicted felon with three counts of domestic violence. Another said he and six others were stalked by a former manager whom they had previously reported for fraud and bullying.

"We know members have requested a blocking feature on LinkedIn. I come to you today to assure you that your concerns were heard loud and clear," he wrote. "We built this feature not only because it was a feature our members requested, but because we also knew it was the right thing to do. I'm pleased to share we are rolling out a new Member Blocking feature today to all LinkedIn members."

How to block and unblock a LinkedIn user 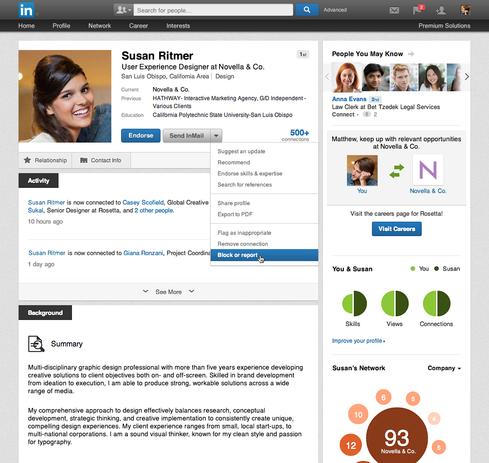 To block a user on LinkedIn, navigate to the person's profile and click the drop-down menu next to the button in the top section of the member's profile (this button may have different names depending on your account). Select "Block or Report" next to the member's name and click continue. On the next screen, click Agree to confirm it. Once you block a member, he or she will appear on your blocked list. LinkedIn lets you block up to 50 people.

According to LinkedIn, you won't be able to block a member again within 48 hours of unblocking him or her. Unblocking a member does not restore a connection if you were previously connected. You'll need to send the person a new invitation to connect.

Blocking: what it means for your account
When you block a member on LinkedIn, you can't access each other's profiles and you can't message one another. If you're connected, the person will no longer be connected to you. LinkedIn will remove any endorsements and recommendations from that member and you won't see each other in your "Who's Viewed Your Profile." LinkedIn will also stop suggesting you to the blocked member (and vice versa) in features such as "People You May Know" and "People also Viewed."

LinkedIn will not notify the person that you have blocked him or her, and only you can unblock the individual. Blocking doesn't apply to information you make public, such as your public profile, content posted in open group discussions, your own public shares, and comments on Influencer posts, LinkedIn said. There are still instances in which you may see content from the person you blocked, and vice versa. For example, mutual connections may reshare content created by that person.

Have you had a situation where a blocking feature on LinkedIn would have come in handy? I've been bombarded before with annoying pitches from sales reps, but never to the extent that some people have experienced.
Reply  |  Post Message  |  Messages List  |  Start a Board

I'm with you Kristin. I find it annoying when people who don't know me recommend me for some professional skill but I don't feel abused by LinkedIn. The social and promotional spam I get in my gmail inbox is much worse. At least Googel separates it now from my "primary" mail so I can ignore it!
Reply  |  Post Message  |  Messages List  |  Start a Board

This kind of option seems like a no-brainer. Some people would ask, what held LinkedIn back from offering this sooner?
Reply  |  Post Message  |  Messages List  |  Start a Board

There was a lot of outrage among a small group of LinkedIn users who said they had been stalked, in part via LinkedIn, and this feature should eliminate that issue for them. I read many of these stories on the LI group Rihtar formed, and some were heartbreaking. Delighted LI finally put this into place -- although like everyone here, unsure why it took so long since most social networks have this capability. I can't imagine being stalked by a stranger through a business networking site. Whereas I could and would leave Facebook, leaving LI would damage my ability to do my job. And I'd resent it, as it's the person who's not in the wrong who's being penalized by being forced to leave.
Reply  |  Post Message  |  Messages List  |  Start a Board
InformationWeek Is Getting an Upgrade!