When you sign up for a service such as Gmail or Google Docs, you may opt out of Google+ via a "No thanks" button.

Google no longer requires new Gmail users to sign up for a Google+ account, a move the company made earlier this month, according to reports. Now when you sign up for a service such as Gmail or Google Docs, you can choose to opt out of Google+ via a "No thanks" button.

Google+ accounts have been mandatory for new users since January 2012. When you signed up for a Google service, you'd also sign up for its social network, whether you planned to use it or not.

To opt out of Google+ when you sign up for a Google account, you can click "No thanks" to proceed without signing up for the social network. Or you can click on "Create your profile" to make an account. Opting out will deny you access to certain features, however. These include rating apps in the Play Store, commenting on YouTube videos, or rating restaurants, for example. 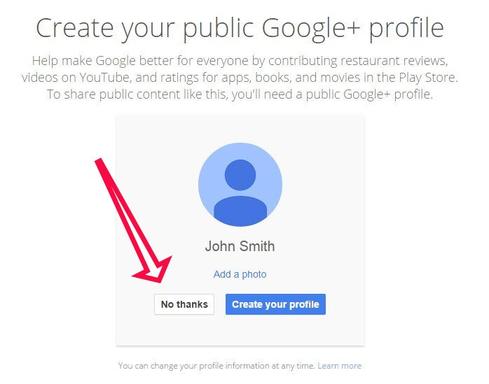 "We updated the signup experience in early September," a Google spokesperson said. "Users can now create a public profile during signup, or later, and if and when they share public content for the first time" like a restaurant review, YouTube video, or Google+ post.

Google has struggled to generate significant interest in the social network and compete with Facebook since its launch in 2011. Nevertheless, the company claims a monthly active user base of 450 million -- a figure that critics widely refute since users don't need to visit the website to be considered active.

Uncoupling the Google+ requirement from new accounts may signify a waning investment in the social network. This news follows the departure of Vic Gundotra in April, who oversaw the social network's development.

Gundotra's departure was the first of several changes affecting Google+ this year. In July, Google reversed a policy that prevented people from using nicknames, pseudonyms, and other fake names on Google+. Google first enacted the real-name policy when Google+ launched to prevent trolling and spamming and to encourage users to connect with people they knew.

Then in August, reports indicated that Google planned to spin off its social network's popular photos feature into a standalone product to attract more users, including those who don't have Google+ accounts.

Despite waning support for public users, Google has beefed up the social network's business offering in recent months. In June, Google made analytics data available for Google+ pages through its Insights service. It also launched premium Google+ features for Apps customers, including additional controls for businesses.

While new users have a quick and easy way to opt out of Google+, older users aren't so lucky. To delete your existing Google+ profile, navigate to your Settings page within Google+, located at the top-right corner. Scroll down to Disable Google+ and click it. At the bottom of the page, click the box next to Required, then click Remove selected services.

If you choose to delete your Google+ profile, the action is permanent, Google says. If you decide to use Google+ later, you will need to create a new profile.

Kristin Burnham currently serves as InformationWeek.com's Senior Editor, covering social media, social business, IT leadership and IT careers. Prior to joining InformationWeek in July 2013, she served in a number of roles at CIO magazine and CIO.com, most recently as senior ... View Full Bio
We welcome your comments on this topic on our social media channels, or [contact us directly] with questions about the site.
Comment  |
Email This  |
Print  |
RSS
More Insights
Webcasts
How Elite Analyst Teams are Transforming Security with Cyber Reconnaissance
ROI and Beyond for the Cloud
More Webcasts
White Papers
2020 SANS Enterprise Cloud Incident Response Survey
The 2020 Duo Security Trusted Access Report
More White Papers
Reports
The Drive for Shift-Left Performance Testing
DNS Network Traffic Volumes During the 2020 Pandemic
More Reports

One of my favorite past tactics was displaying how many times a user's profile has been viewed. Everyone reported ludricous numbers, and all wondered how (and why) that number of people viewed a profile that had zero activity.
Reply  |  Post Message  |  Messages List  |  Start a Board

I finally gave in and downloaded Facebook Messenger. Now I'm part of that stat, but not so willingly.
Reply  |  Post Message  |  Messages List  |  Start a Board


@Ariella    I agree.   YouTube is particularly annoying about this, and since they are owned by Google - they want to keep you in Google's sphere of influence - ( aka Googlesphere ).  You know the goal - continual tracking to anticipate your every whim.

I made up the term Googlesphere - just couldn't help myself. : )


"...Uncoupling the Google+ requirement from new accounts may signify a waning investment in the social network."

I certainly think it is - I am so happy to learn that this manditory sign-up  has ended - Now I need to figure out how to disable it for old users.


I like Google+  but I don't think it has caught  or ever will catch the kind of fire Google needs to justify the expense.

It was clear Google+ failed when Vic Gundotra departed. Google just doesn't want to admit it yet.
Reply  |  Post Message  |  Messages List  |  Start a Board

Forcing people to sign up racks up instant and misleading results. People who enjoy the brand for one fuction will become more wary before adopting others. People's freely given loyalty counts for something; success isn't purely a product of acquiring names on a ledger. Technical companies sometimes lose sight of where the real business value lies.
Reply  |  Post Message  |  Messages List  |  Start a Board

I use Google+, but that doesn't mean I want my profile on everything. Every time I go on YouTube, the system tries to force me to sign in with my Google profile, though I have no interest in doing so.
Reply  |  Post Message  |  Messages List  |  Start a Board

Did Google's alleged interest in WhatsApp ever get clarified? I recall a bunch of reports that claimed Google was prepared to offer $10 billion before WhatsApp was finally acquired by Facebook, but then there were some additional reports that refuted this. I ask because the willingness to pay such a sum implies a sustaining interest in social from Google, albiet in a much different, more mobile-focused form than Google+.
Reply  |  Post Message  |  Messages List  |  Start a Board
Page 1 / 2   >   >>
Editors' Choice
Hot Topics