After facing criticism for not activating the Safety Check feature following the terror attacks in Beirut, Facebook's Mark Zuckerberg defends its use in Paris following Friday's terrorist attacks.

Many Facebook users worldwide were granted an immediate sense of relief this weekend upon checking the profiles of their friends in Paris and seeing them safely checked in thanks to a new feature on the social media site.

Facebook's Safety Check feature allows users, in times of emergency or natural disasters, to check a box alerting their friends and family that they are safe.

Alex Schultz, Facebook's vice president of growth, wrote in a blog post that the company decided to activate Safety Check in Paris after engineers observed a lot of activity on Facebook as events unfolded Friday night and Saturday morning following the terrorist attacks that left more than 100 people dead. The group ISIS later claimed responsibility.

The company unveiled Safety Check in 2014 and, before the Paris attacks on Friday, Nov. 13, had used it five times, all natural disasters.

"In the middle of a complex, uncertain situation affecting many people, Facebook became a place where people were sharing information and looking to understand the condition of their loved ones," Schultz explained. "We talked with our employees on the ground, who felt that there was still a need that we could fill. So we made the decision to try something we've never done before: activating Safety Check for something other than a natural disaster." 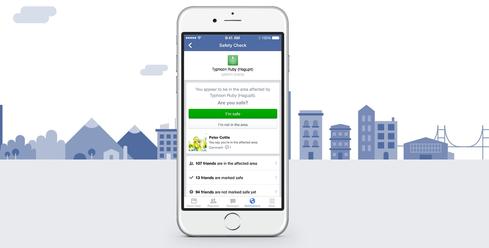 Safety Check works by allowing users to select Safe, Unsafe, or Not in the Area status selections, which can then be shared on the user's Facebook page and will appear on their friends' pages and also in their News Feed.

More than 4 million people marked themselves as safe in the 24-hour period following the attacks, which occurred in six separate sites in central Paris, according to several media reports.

However, Facebook soon came under criticism regarding its decision to activate the feature for the terror attacks in Paris after having declined to do in the immediate aftermath of the recent suicide bombings in Beirut, which left 43 people dead.

Facebook CEO Mark Zuckerberg responded to the criticism with a post on his Facebook page, thanking everyone who reached out with questions and concerns about the use of Safety Check, and noted users were right to point out that there are many other important conflicts in the world.

[Read more about Facebook and what governments ask for information.]

Schultz noted Facebook would also continue to explore how the company can help people show support for the things they care about through their Facebook profiles, which they did in the case of Paris, and noted that the Safety Check feature was a work in progress.

"We create products that we think will help people and we work hard to perfect the solution over time," Schultz said. "We're going to continue working to make it better and more useful. We want this tool to be available whenever and wherever it can help."

Nathan Eddy is a freelance writer for InformationWeek. He has written for Popular Mechanics, Sales & Marketing Management Magazine, FierceMarkets, and CRN, among others. In 2012 he made his first documentary film, The Absent Column. He currently lives in Berlin. View Full Bio
We welcome your comments on this topic on our social media channels, or [contact us directly] with questions about the site.
Comment  |
Email This  |
Print  |
RSS
More Insights
Webcasts
Keys to Better Cyber Risk Assessment
Take DevOps to the Next Level
More Webcasts
White Papers
CPRA: The Simple Guide
Annual Cybercrime Report
More White Papers
Reports
We Need Your Input: Trends in Workforce Optimization
Are We Cyber-Resilient? The Key Question Every Organization Must Answer
More Reports