Majority of US teens still use the site and their time on site has increased, Forrester survey says.

A new report from Forrester, however, says this isn't true. In fact, more than 75% of teens use Facebook and use it more often than before, it found.

"Sure, many data sources show that Facebook's usage among young people has declined slightly -- but the drops are small, and the huge majority of this audience still uses the site," said Nate Elliot, coauthor of the report, in a blog post.

Forrester surveyed 4,517 online youth ages 12 to 17 about the social networks they use -- including Facebook, Instagram, Snapchat, Twitter, WhatsApp, and Tumblr -- and how often they use them each day.

More than three-quarters of online youth use Facebook, which is more than they use Instagram and WhatsApp combined, the report found. Facebook famously purchased messaging service WhatsApp last year for $19 billion in an effort, experts said, to retain its waning teen demographic. 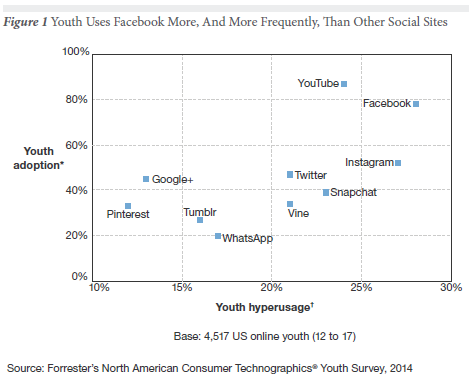 The only site to trump Facebook in usage is YouTube, the report found, though it didn't consider this significant since users rarely use it to establish friend connections, it said.

"Every site experiences churn, and Facebook is no exception," the report said. "But just as many young users say they've increased the time they spend on Facebook as say they've decreased usage. And promisingly for Facebook, the youngest users in our survey were the most likely to say they're spending more time on the site." 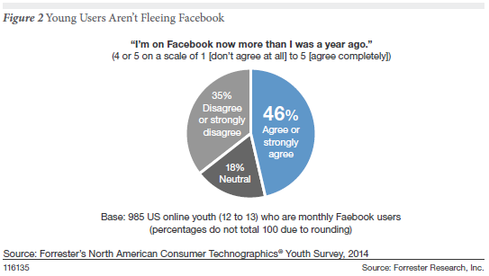 Forrester's findings negate other recent reports on Facebook's young audience. Pew Research found that teens have "waning enthusiasm for Facebook," because of the social network's increased adult presence, excessive sharing, and "stressful drama." A report from Princeton University even found that Facebook was set to lose a whopping 80% of its users by 2017.

Kristin Burnham currently serves as InformationWeek.com's Senior Editor, covering social media, social business, IT leadership and IT careers. Prior to joining InformationWeek in July 2013, she served in a number of roles at CIO magazine and CIO.com, most recently as senior ... View Full Bio
We welcome your comments on this topic on our social media channels, or [contact us directly] with questions about the site.
Comment  |
Email This  |
Print  |
RSS
More Insights
Webcasts
The Failures of Static DLP and How to Protect Against Tomorrow's Email Breaches
Building the SOC of the Future: Next-Generation Security Operations
More Webcasts
White Papers
The Essential Guide to Securing Remote Access
Two-Factor Evaluation Guide
More White Papers
Reports
2021 Top Enterprise IT Trends
Evolution of Ransomware Gangs
More Reports

It is a pretty normal thing to find a teenager glued to a monitor or even their phones checking out their Facebook accounts or even that of their friends. They make Facebook seem like a formal platform which they can use to communicate things to the friends and even relative through their posts and the pictures they upload. This has brought a lot of concern by very many grown ups since Facebook seems to be taking up a lot of the youngsters time and exposing them to a lot of unauthorized information and sites. Facebook should therefore not be taken very lightly by parents and other grown ups who watch their addicted teens.
Reply  |  Post Message  |  Messages List  |  Start a Board

I think Facebook did the right thing splitting off its messaging app. While I certainly saw a drop off in the usage of Facebook by younger people in my life, it seems to have bobbed back up again since the app has been out.
Reply  |  Post Message  |  Messages List  |  Start a Board

You have a point, Lorna. I suppose there should be a measure to factor in the effects of teens who might be giving answers for the purpose of skewing the entire study. Having been a teen myself, I don't really see the benefit of giving proper answers because there pretty much isn't anything in it for me (yes, I was a selfish teen, lol.)
Reply  |  Post Message  |  Messages List  |  Start a Board

I think there's a big difference between 12- and 13-year-old Facebook users who say they use the site at least a few times each day and 17-year-olds, who seem to use FB as a "formal" platform where they post things they want their parents, aunts, and uncles as well as friends to see.

I bet many parents restrict younger teens to Facebook -- or try to anyway -- and the kids' survey responses reflect what they want adults to know. Kids assume that there is no anonymity, and it wouldn't surprise me if that starts skewing survey data as they answer as they think they SHOULD answer, not the real facts.
Reply  |  Post Message  |  Messages List  |  Start a Board
Editors' Choice
Hot Topics