Facebook again tries to win over Snapchat users with Slingshot, its own version of self-destructing messages. Here's a look at the app's features.

Facebook hopes that third time's the charm. After failing to attract Snapchat users with its own version of the app in 2012 -- and after two failed bids to acquire Snapchat -- Facebook today launched Slingshot, its latest rebuttal to the popular ephemeral messaging app.

Like Snapchat, Slingshot lets users share short-lived photos and videos with each other. Facebook's twist: Slingshot requires you to share something before you can view what your friends have sent you.

"With Slingshot, we wanted to build something where everybody is a creator and nobody is just a spectator," Facebook said in a blog post. "When everyone participates, there's less pressure, more creativity, and even the little things in life can turn into awesome shared experiences." 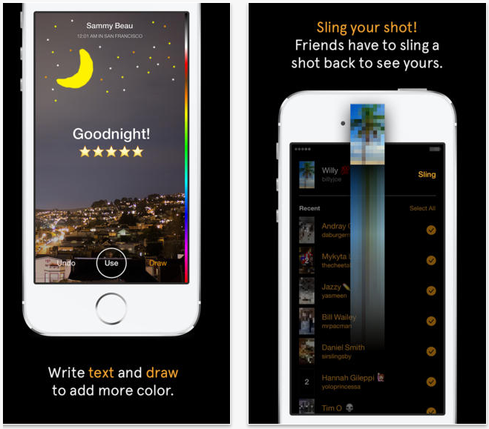 Like Paper, Slingshot comes from Facebook's Creative Labs, an initiative to design apps for mobile devices. The idea for Slingshot was born out of a recent Facebook hackathon, the company said.

Slingshot is available to iOS and Android users in the US today. When you open the app, it guides you through a few steps to set up your account, which includes choosing a user name, adding your mobile number, and entering a verification code.

Once you set up your account, Slingshot opens your device's camera to let you take a photo or record a video. Buttons on the bottom let you access your device's front- or rear-facing camera and turn the flash on or off. To snap a photo, tap the Shoot button; to record a video, hold the Shoot button down. You can shoot videos up to 15 seconds long.

Like Snapchat, you can add text or doodles to your video or image before you send it to friends. If you add a doodle, music plays in the background, and there doesn't appear to be a setting to turn it off (other than switching your phone to silent mode).

Unlike Snapchat, you can tag your images and videos with a location before you send them. This location will be visible to whomever you share it with; if you don't want Slingshot to collect and store location info, turn it off in your phone's settings.

Another difference from Snapchat: You can save the videos and images you send to friends automatically to your device's camera roll. This option is not turned on by default; to switch it on, visit your Slingshot settings by swiping down in camera mode and tapping your name in the top-left corner.

When you receive a message, you can either swipe a message away to delete it forever or respond by slinging something back -- either a comment or your own image or video.

According to Slingshot's data use policy, once you view and dismiss a shot, you can no longer view it in the app. If you react to a shot before you dismiss it, the original shot will appear with your reaction. Shots and reactions can no longer be seen in the app 30 days after being sent, even if they haven't been viewed or are unlocked and marked to view later.

Kristin Burnham currently serves as InformationWeek.com's Senior Editor, covering social media, social business, IT leadership and IT careers. Prior to joining InformationWeek in July 2013, she served in a number of roles at CIO magazine and CIO.com, most recently as senior ... View Full Bio
We welcome your comments on this topic on our social media channels, or [contact us directly] with questions about the site.
Comment  |
Email This  |
Print  |
RSS
More Insights
Webcasts
Building the SOC of the Future: Next-Generation Security Operations
ROI and Beyond for the Cloud
More Webcasts
White Papers
A Technical Deep Dive on Software Exploits
MPLS, SD-WAN and SASE
More White Papers
Reports
Assessing Cybersecurity Risk in Todays Enterprises
Email Security Threat Report 2020
More Reports

I guess that's their strategy now. Much the same way they separated their messaging app from the main app. Why? I think it's to allow for quicker & easier development. More importantly, if the decide to spin off the app/service, it can be done seamlessly.
Reply  |  Post Message  |  Messages List  |  Start a Board

I think this might be the case if Facebook built Slingshot into its primary app. But because it requires users to specifically search for an download something extra, it may face adoption challenges. Then again, Facebook wants it to be completely separate for this reason -- more registrations, more users.
Reply  |  Post Message  |  Messages List  |  Start a Board

I think they will. For the simple reason that they don't have to switch between apps to accomplish the same thing. It brings up the 'privacy' issue yet again but then again, it is FB.
Reply  |  Post Message  |  Messages List  |  Start a Board

A lot of people share that same sentiment. Facebook recently uncoupled messaging from its app and made it into a standalone application. It also released Paper, a standalong news reader that works alongside Facebook. I'm not surprised that it's not adding this feature to its main app because this demographic is so important to the company. Fewer young users are joining because they think Facebook is for their parents. By keeping this app separate, they're able to attract and retain (some) of these users.
Reply  |  Post Message  |  Messages List  |  Start a Board

It seems kind of silly to have another app to do something that someone is already doing...  my question is - why not just make this a feature of Facebook itself?  You already have the users on facebook.  Why not add a dissappearing message function to facebook itself.

Everything we post to facebook is visible forever, unless we delete it, but even then it is "out there".  Why not add 30-day self destructing messages right into facebook.  That makes much more sense to me.

I don't need another app clogging my smartphone memory, or another login to keep track of, or yet another place to tell my friends what I'm doing.

Personally, I won't. I think the targetted userbase for Slingshot is, well, the users of Snapchat, and even that demographic is pretty limited. I don't see this being a huge hit (obviously when compared to the original), but like you said, we'll see soon enough.
Reply  |  Post Message  |  Messages List  |  Start a Board

We're flattered that Facebook "borrowed" IP for our messaging mechanic that we debuted at the TechCrunch Pitch-off in Los Angeles. www.GetLookApp.com. Copying a mobile based startup in Los Angeles to compete with another LA based startup that was already copied? Perhaps the new source of "innovation".
Reply  |  Post Message  |  Messages List  |  Start a Board

I think a lot of people wonder the same thing. :-) It's a novelty app for a younger demographic, which is important for Facebook to attract. Facebook knows it's not going to be the next Snapchat, but it's still trying to compete. Will users download it? We'll see.
Reply  |  Post Message  |  Messages List  |  Start a Board

I honestly don't even understand why some people use Snapchat? I would think if you're not sending anything you don't really think you should, thus the disappearing aspect, then why not use a regular chat app?
Reply  |  Post Message  |  Messages List  |  Start a Board

I know I'm not Snapchat's demo and while I'm a Facebook user, I don't really have a need for a SnapChat clone. So maybe I just don't get it. But if I'm going to have a chat that is supposed to disappear why would I have it with a company that keeps track of everything thing I've done in its site since before the light bulb was invented?

I know I trust Facebook to keep stuff for me, so I should trust it to lose it. But somehow that seems harder to believe.
Reply  |  Post Message  |  Messages List  |  Start a Board
Editors' Choice
Hot Topics