Virtual friends socializing in virtual reality? There's a headset for that.

Not to be left out of the wearable computing market, Facebook on Tuesday said it has agreed to acquire Oculus VR, maker of the Oculus Rift virtual reality headset, for $2 billion -- $400 million in cash and $1.6 billion in Facebook stock.

That's far less than the $19 billion Facebook spent to acquire WhatsApp last month, but it's nonetheless the second-largest acquisition the company has made to date. Oculus VR began as a Kickstarter campaign that sought $250,000 and collected almost 10 times that amount by the time the campaign concluded in October 2012.

In a public post, Facebook CEO Mark Zuckerberg described the deal as a way for Facebook to begin focusing on the platforms that will come after mobile. Oculus's technology, he said, "opens up the possibility of completely new kinds of experiences." 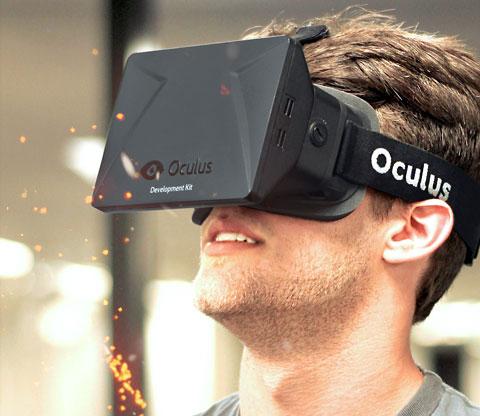 Zuckerberg said Oculus, with Facebook's help, will continue to focus on its Rift headset for immersive gaming. "But this is just the start," he said. "After games, we're going to make Oculus a platform for many other experiences. Imagine enjoying a courtside seat at a game, studying in a classroom of students and teachers all over the world, or consulting with a doctor face-to-face -- just by putting on goggles in your home."

Google is imagining just that, but with Glass rather than goggles. And so too are others: Augmedix recently raised $3.2 million to make Glass more suitable for doctors. The tech sector is hoping that the wearable computing market will take off in the same way as the mobile device market.

[Is Google honest about what Glass does and doesn't do? See 10 Google Glass Myths, Translated.]

Despite the fact that Facebook's obsession with social interaction and sharing seems to fit poorly with a device designed to isolate the wearer from the real world, Zuckerberg nonetheless extols Oculus's headset as a new communication platform.

Brendan Iribe, co-founder and CEO of Oculus VR, characterized his company's technology in a similar manner: "We believe virtual reality will be heavily defined by social experiences that connect people in magical, new ways."

Virtual friends and virtual reality: It's a match made in heaven, if you're a marketer. But not necessarily if you're a developer. Minecraft creator Markus Persson, better known as Notch, slammed the deal in a Twitter post.

We were in talks about maybe bringing a version of Minecraft to Oculus. I just cancelled that deal. Facebook creeps me out.

"By feeling truly present, you can share unbounded spaces and experiences with the people in your life," Zuckerberg declared. "Imagine sharing not just moments with your friends online, but entire experiences and adventures."

And ads? There's no mention of that, but then Facebook prefers euphemisms for advertising like "sponsored stories." If Facebook heads in that direction, you might imagine sharing not just moments with your friends online, but entire branded experiences and sponsored adventures.

It may be worth noting that Cory Ondrejka, Facebook's director of mobile engineering, has considerable virtual reality experience: He previously served as the CTO of Linden Lab, maker of Second Life.

Thomas Claburn has been writing about business and technology since 1996, for publications such as New Architect, PC Computing, InformationWeek, Salon, Wired, and Ziff Davis Smart Business. Before that, he worked in film and television, having earned a not particularly useful ... View Full Bio
We welcome your comments on this topic on our social media channels, or [contact us directly] with questions about the site.
Comment  |
Email This  |
Print  |
RSS
More Insights
Webcasts
Strategies for Success with Digital Transformation
Building the SOC of the Future: Next-Generation Security Operations
More Webcasts
White Papers
MPLS, SD-WAN and SASE
Top Threats to Cloud Computing: The Egregious 11
More White Papers
Reports
The State of Threat Detection and Response
2020 State of DevOps Report
More Reports

People seem to be split 50/50 on this acquisition: Is Facebook a genius and forsees a future that others have not, or is Facebook crazy for plunking down $2 billion for this company? What do you think?
Reply  |  Post Message  |  Messages List  |  Start a Board

While I can't help but feel a bit sad that a startup like Oculus has been bought by a mega corporation like Facebook, especially with the way it's treated users in the past, I think it's probably best for everyone in the long run. Oculus gets more capital, Facebook can expand into new directions and help improve the uptake of the hardware and it'll help shake off the "just for gaming," feel it has. VR could be used for so much more.
Reply  |  Post Message  |  Messages List  |  Start a Board

The book "Ready Player One" is instructive here (http://readyplayerone.com/) - the protagonist escapes his miserable, post-apocalyptic life in an online world where he goes to school and hangs out and everyone is young and hip. Sadly, in "real" life he gets fat and out of shape and lives in a bare apartment with the windows blacked out.

Excuse me while I curl up under my desk and whimper.
Reply  |  Post Message  |  Messages List  |  Start a Board

Oculus VR has nothing in common with Oculus ...Innovative Sciences. Unless u consider the idiotic traders buying up Oculus VR today ( then realizing mistake, dumping later)
Reply  |  Post Message  |  Messages List  |  Start a Board

I mean, the idea that a company that has a social network and likes to display ads getting into something you wear on your face like glasses is a horrible idea. Absolutely horrible. Google would never, ever... oh wait...
Reply  |  Post Message  |  Messages List  |  Start a Board
Editors' Choice
Hot Topics

10 IT Trends to Watch for in 2021 Cynthia Harvey, Freelance Journalist, InformationWeek,  12/22/2020
White Papers
5 Steps to Zero Trust in the Data Center
The Dark Side of SD-WAN
IDC Workbook: Best Practices for Cloud Security
From MFA to Zero Trust
Passwordless: The Future of Authentication