While more than 85% of people around the world live in areas with cellular coverage, only 30% actually access the Internet. Social networking giant Facebook -- along with CEO Mark Zuckerberg's Internet.org project -- announced a new app Thursday that aims to close that accessibility gap.

The Internet.org initiative, which Zuckerberg announced last summer, aims to bring Internet access to the 4.25 billion people who lack it. Facebook product management director Guy Rosen said in a blog post that this app will be a stepping stone in connecting the rest of the world.

"Affordability and awareness are significant barriers to Internet adoption for many, and today we're introducing the Internet.org app to make the Internet accessible to more people by providing a set of free basic services," he said. "By providing free basic services via the app, we hope to bring more people online and help them discover valuable services they might not have otherwise." 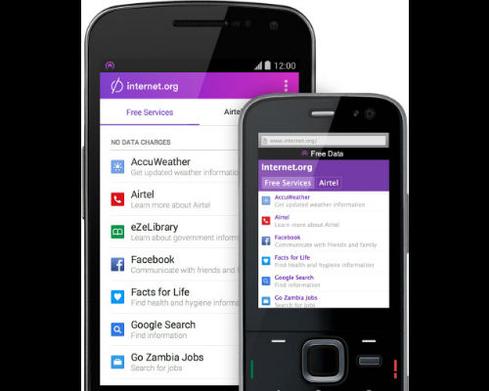 According to Rosen, Airtel pays for users' free access with hopes that subscribers will find it valuable and opt into the company's other data plans. For example, if users click to a website not covered by the Internet.org app, the app will alert them they need to buy a data plan or add more data to their existing data plan, Rosen told TechCrunch.

Facebook has piloted similar projects in the past. In February, Zuckerberg discussed results of partnering with Globe Telecom to offer users in the Philippines free access to Facebook and other apps. During the pilot, which ran from October to April, the number of Internet users in that country doubled, he said.

During last week's earnings call, Zuckerberg said that its initial partnership with the Philippines -- and other trails in Paraguay and Tanzania -- helped about 3 million people connect to the Internet who didn't have access before.

While Facebook and Internet.org have concentrated on bringing affordable -- or free -- Internet to developing countries, they have also worked to make Facebook's app more accessible to those who already have Internet access on feature phones.

Last month, Facebook overhauled its Android app for emerging countries, concentrating specifically on cutting the amount of data it used. Facebook sent a team of engineers to Africa to gauge the app's performance, data efficiency, networking, and application size. In the end, Facebook was able to reduce start times by more than 50%, data usage by 50%, reports of slow or failed image loads by 90%, and the overall size of its Android app by 65%, it said.

The Internet.org app is available only to Airtel subscribers in Zambia, but Facebook plans to roll it out to other parts of the world, Rosen said.

"Right now, only 15% of people in Zambia have access to the Internet," Zuckerberg said in a Facebook post. "Soon, everyone will be able to use the Internet for free to find jobs, get help with reproductive health and other aspects of health, and use tools like Facebook to stay connected with the people they love."

Kristin Burnham currently serves as InformationWeek.com's Senior Editor, covering social media, social business, IT leadership and IT careers. Prior to joining InformationWeek in July 2013, she served in a number of roles at CIO magazine and CIO.com, most recently as senior ... View Full Bio
We welcome your comments on this topic on our social media channels, or [contact us directly] with questions about the site.
Comment  |
Email This  |
Print  |
RSS
More Insights
Webcasts
Staffing & Training a Cyber Incident Response Team
Now That Ransomware Has Gone Nuclear, How Can You Avoid Becoming the Next Victim?
More Webcasts
White Papers
[Forrester Research] The State of Data Security & Privacy
[Cybersecurity] 6 Misconceptions About Collective Defense
More White Papers
Reports
2020 State of DevOps Report
Special Report: Computing's New Normal, a Dark Reading Perspective
More Reports

This is inspiring work from Facebook, the internet should be a basic right, as you say, and one day I hope the world achieves this goal, with Facebook's help.Giving Internet access to people, can enable them to learn, create, and pull themselves and their local area out of poverty.
Reply  |  Post Message  |  Messages List  |  Start a Board

It's nice to see internet / Facebook being considered a basic need of man. The rest of the world needs to learn from this.
Reply  |  Post Message  |  Messages List  |  Start a Board
Editors' Choice
Hot Topics