Facebook CEO Mark Zuckerberg discussed why the social network made Messenger mandatory, his personal style, and more in a Q&A session with users. Here's a look at the highlights.

Facebook CEO Mark Zuckerberg opened up about his personal style, the company's unpopular decision to make Messenger mandatory, and other questions from users on Thursday during the social network's first public Q&A session.

The event, which was live streamed and lasted an hour, mirrored meetings that Zuckerberg holds with employees, who are encouraged to ask the CEO anything they want. Zuckerberg said this is an important part of Facebook's culture, and wanted to extend the tradition to the public.

"People ask thoughtful questions about why our company is going in certain directions, what I think about things happening in the world, and how we can continue improving our services for everyone," he said in a post on his Facebook page.

Topics that Zuckerberg addressed ranged from the accuracy of the movie The Social Network to details about Facebook's news feed algorithm, and the reason why he wears the same outfit every day. Here's a look at the highlights. 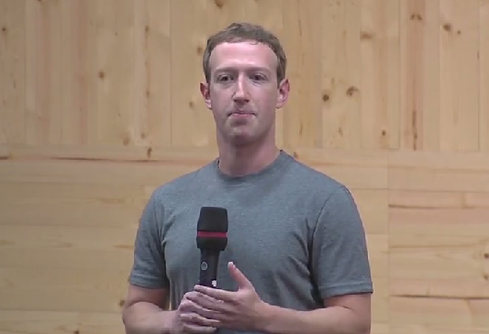 1. Zuckerberg never wanted Facebook to be "cool."
Zuckerberg addressed a question that asked whether Facebook had become boring -- a nod to research that indicates that teens don't use it. His response: The social network is a utility, and utilities inherently aren't very cool.

"My goal was never really to make Facebook cool. I am not a cool person and I've never really tried to be cool," Zuckerberg said.

Facebook, he said, just needs to work, like a light bulb or turning on a faucet. Those actions aren't "cool," he explained, but they're things that "people can rely on."

2. The reason Facebook made Messenger mandatory.
Messenger is a better experience than the feature built into the main app, Zuckerberg said. It's faster, but only if all of your friends use the app, too, which is why the company made it mandatory for anyone wanting to chat.

"Asking everyone in our community to install a new app is a big ask," Zuckerberg said. "Asking folks to install another app is a short-term painful thing, but if we wanted to focus on service ... we had to build a dedicated and focused experience. This is some of the hardest stuff we do, is making these choices. We realize that we have a lot to earn in terms of trust and proving that this standalone messenger experience will be really good."

Zuckerberg acknowledged that it wasn't a popular decision among users, admitting that "maybe we didn't handle that as smoothly as we could, in terms of transition."

3. There's a reason Zuckerberg wears the same thing every day.
Steve Jobs was known for his signature black turtleneck, while Zuckerberg has become synonymous with jeans and a gray t-shirt. But why?

"I'm in this really lucky position where I get to wake up every day and help serve more than 1 billion people, and I feel like I'm not doing my job if I spend any of my energy on stuff that's frivolous [like deciding what to wear]," he said. "Even though it kind of sounds silly, that that's my reason for wearing a gray t-shirt every day, it's also true."

Zuckerberg and team are constantly tweaking the algorithm with hopes of it becoming "the perfect personalized newspaper for everyone in the world," he said. Coincidentally, that's why businesses have complained that they're reaching fewer and fewer people.

5. The Social Network hurt Zuckerberg's feelings.
Zuckerberg was asked how accurate The Social Network movie was in portraying his life and the rise of Facebook, and he maintained that while some elements were based on reality, most of it was untrue.

"I haven't spent a lot of time thinking about this in a while. I kind of blocked that one out," he said. "The reality is that writing code and building a product is not a glamorous enough thing to make a movie about. A lot of the stuff they probably had to embellish and make up. If they were really making a movie, it would've just been me at a computer coding for two hours straight."

Some details, including the office design, were accurate, Zuckerberg said, but "with the overarching plot about why we're building Facebook or how we did it, they kind of made up a bunch of stuff that I found kind of hurtful."

Zuckerberg said that more than 9,000 people submitted questions to the Q&A with Mark Facebook page, and that he plans to hold more town hall Q&A sessions in the future.

Considering how prevalent third-party attacks are, we need to ask hard questions about how partners and suppliers are safeguarding systems and data. In the Partners' Role In Perimeter Security report, we'll discuss concrete strategies such as setting standards that third-party providers must meet to keep your business, conducting in-depth risk assessments -- and ensuring that your network has controls in place to protect data in case these defenses fail (free registration required).

Kristin Burnham currently serves as InformationWeek.com's Senior Editor, covering social media, social business, IT leadership and IT careers. Prior to joining InformationWeek in July 2013, she served in a number of roles at CIO magazine and CIO.com, most recently as senior ... View Full Bio
We welcome your comments on this topic on our social media channels, or [contact us directly] with questions about the site.
Comment  |
Email This  |
Print  |
RSS
More Insights
Webcasts
Protecting Your Enterprise's Intellectual Property
How Elite Analyst Teams are Transforming Security with Cyber Reconnaissance
More Webcasts
White Papers
From MFA to Zero Trust
All In, Online Gaming & Gambling
More White Papers
Reports
Annual Global State of the WAN
2020 Threat Hunting Report
More Reports

Unfortunately, I think we're well on our way, though.
Reply  |  Post Message  |  Messages List  |  Start a Board

Isn't it a downer how Facebook newsfeed algorithm also collects data from the sites I've visited to aquire a side panel of advertisements that suit me? I find it very uncomfortable as if my movements are being watched.
Reply  |  Post Message  |  Messages List  |  Start a Board

I completely agree. User data, reach and user time is how it makes its money. This brings up an interesting point, i.e. has Facebook gained any additional user attention in their Newsfeed section by splitting their main app from their messaging feature.
Reply  |  Post Message  |  Messages List  |  Start a Board

Facebook is still one of those platforms that can be ignored by the user if they choose. I don't think the same can be said about businesses that ignore the platform. LinkedIn on the other hand seems like a platform that might cost the user heavily if it is ignored and firms start using it increasingly for their hiring requirements. Either way, these platforms require a lot of time and effort by the user to portray a clear and accurate picture.
Reply  |  Post Message  |  Messages List  |  Start a Board

I'm not surprised Facebook didn't answer any privacy questions; clearly the ones they answered were purposefully hand-picked. (Can you imagine how volatile the Q&A session -- which was more of a PR ploy, really -- could have become?) Privacy will always be Facebook's downfall -- but user data is how it makes its money. Facebook has no need to change unless users begin leaving in droves, which won't happen unless there's a viable alternative.
Reply  |  Post Message  |  Messages List  |  Start a Board

Remember that it was only a few years ago that Mark Zuckberg declared privacy as officially dead. I don't think we're quite there yet and I hope that enough people will continue to not give Facebook everything in order to prove that point.
Reply  |  Post Message  |  Messages List  |  Start a Board

hahahah.  Thank you Paul.  I think they picked the most innocent questions. I really don't care whether their CEO wears the same T-shirt to work.  But, if he thinks my personal photos are his property and he can use it however he wants it. That is a serious matter.  They are making huge amounts of money, if they are using our info they should at least, informed us ahead of time.
Reply  |  Post Message  |  Messages List  |  Start a Board

Good point about privacy. I would have imagined that it was a big enough topic to make the Q&A session. At the end of the day, Facebook is under a trade-off, if they do not monetize their system then economics will bring the site down and if they over monetize it by not taking user privacy seriously then, users will eventually bring the site down.
Reply  |  Post Message  |  Messages List  |  Start a Board

Exactly what I was thinking when I was reading this. Privacy has gone out the window and Facebook appaerntly doesn't care about people's privacy when they can make $$$ at its expence.
Reply  |  Post Message  |  Messages List  |  Start a Board
Page 1 / 2   >   >>
Editors' Choice
Hot Topics

10 IT Trends to Watch for in 2021 Cynthia Harvey, Freelance Journalist, InformationWeek,  12/22/2020
White Papers
Presenting Your Cloud Security Strategy to the Board
The State of Threat Detection and Response
Seven recommendations for a Successful SD-WAN Strategy
Transforming the Corporate WAN: Enterprise Network Insights
ROI Study: Economic Validation Report of the Anomali Threat Intelligence Platform