In only a couple of years, Twitter's gone from what seemed like a mere gimmick to one of the fastest ways to spread the word about something. That makes it seem like an ideal medium for a business to raise notice about its products and services, and in fact that's what a great many companies do. The problem is that the very audience you'll be seeking to engage with Twitter is also the same audience that has a built-in skepticism about social media. Twitter users by and large are entirely too con 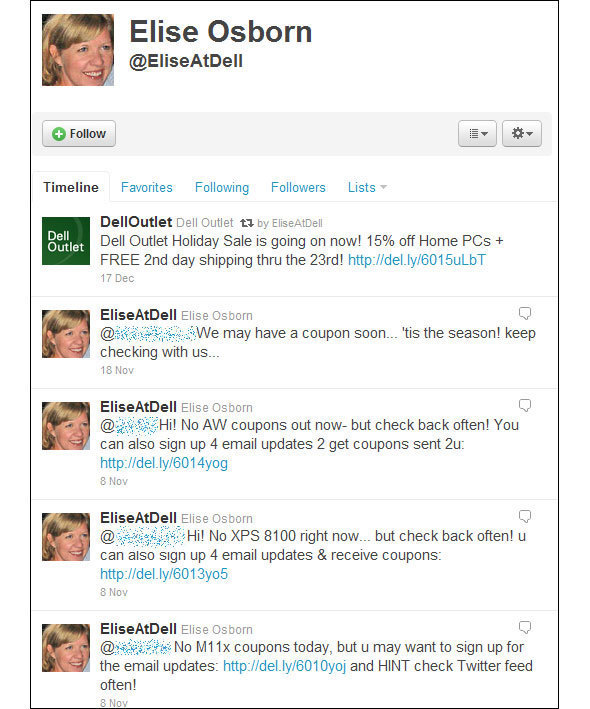 It's important to have a real person behind your Twitter feed. Elise Osborn, the "live human being" face of Dell Outlet on Twitter, deals directly with other customers on Twitter with questions or comments.

From the outside, Twitter seems like a one-way medium -- a bullhorn for broadcasting. Right now, that's the most common corporate use of Twitter, as a kind of news ticker or early-announcement system. But Twitter's two-way nature means eventually, people are going to want to talk back -- and they will expect at least some response. In the end, Twitter works best as a conversational medium, not simply as a way to shout out. Because this approach is still so new, it's often tough for a company to adopt it properly. Many companies dip their toe into Twitter's pool by creating an official Twitter account, or sometimes multiple accounts for different divisions. Sometimes they do this without a clear idea of what that opens themselves up to: they're prepared to broadcast, but not receive.

Comment  |
Email This  |
Print  |
RSS
More Insights
Webcasts
People Are The Most Important Part of Autonomous SOC
Nip Ransomware in the FUD: Detecting Attacks Pre-Encryption
More Webcasts
White Papers
Why Add Security to Your Skill Set and How to Do It
New Cybersecurity Paradigm
More White Papers
Reports
Building the SOC of the Future
Are Unprotected Cloud Databases Leaking Your Data?
More Reports