Microsoft has announced the impending launch of the Office Universal apps preview for Windows 10 on Windows Phone. With this release, anticipated for the end of this month, Microsoft is completing its Office for Windows line-up.

This news follows a series of app updates for Windows 10. In February, Microsoft launched Universal apps for tablets in its Windows 10 technical preview. Last month, the Desktop IT Pro and Developer preview for Office 2016 was released.

Both tablet and smartphone users will be able to view and edit documents across Office apps on their Windows devices. The collection of Office Universal apps shares the same code base, but each app will have a slightly different interface, depending on the device being used.

For tablets, the Universal apps lend themselves to creating content with a fingertip or a pen. The interface changes for smartphone use in order to accommodate a smaller screen. For example, commands and controls move to the bottom of the screen so that a user can make edits while holding the phone in one hand.

Despite the global growth of mobile productivity, there remains a high demand for fully functional desktop apps. Microsoft has announced the impending release of Office 2016 for Windows desktops, promising enhanced features for professional content creation. These include improved authoring, simplified collaboration, and deep analysis.

Modern productivity is a key focus in the capabilities within Office 2016, which will be designed to deliver a consistent and intuitive Office user experience across all devices and platforms. The apps will learn as the user works, reports Microsoft. For example, a new search tool called Tell Me will help users find commands they need in Word, PowerPoint, and Excel by typing what they want to do. 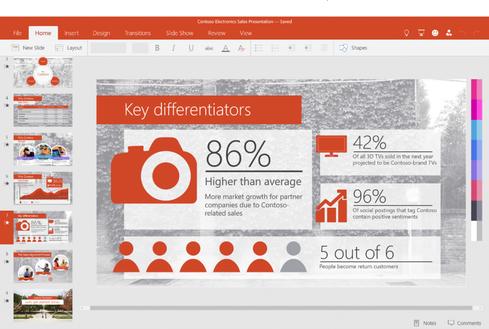 Cloud technology will play an important role across the Universal apps. Microsoft has revamped its Backstage feature to help users more easily leverage cloud services to open, edit, save, and create files from their desktop. Outlook will come with modern attachments so that users can attach files from OneDrive and set permissions for content recipients without leaving the app.

Updates to Excel include new business intelligence capabilities and data visualizations for faster and simpler analysis. Power Query will be integrated into Excel so that the program has its own features for discovering, refining, and combining data from a multitude of sources. Previously, Power Query was only available as a separate download.

It's good that MS can provide univeral office functionality across different platforms. It will benefit especially the mobile workers, who will use mobile phone to handle most of the business. Can the release period be shortened so that I can get Office 2015 instead of Office 2016?
Reply  |  Post Message  |  Messages List  |  Start a Board
Editors' Choice
Hot Topics