Unify on Oct. 28 launched Circuit, its cloud-based social-business collaboration tool, which had been known as Project Ansible. Along with a number of other industry analysts and consultants, I got to hear about and work with the product at conference in October, hosted by the company in Scottsdale, Ariz. The company also celebrated the first anniversary of its rebranding from Siemens Enterprise Communications to Unify.

With Circuit, Unify is clearly stepping out of its comfort zone of PBX and unified collaboration systems (OpenScape Business, OpenScape 4000, OpenScape Enterprise, and OpenScape Enterprise Express). The product concept and direction was initially announced at an event in Denver in June 2013, and Unify demonstrated an early version at Enterprise Connect last March. A number of people who participated in October's launch conference commented that it didn't seem to have advanced very far since then.

Circuit is the keystone in Unify's new market strategy dubbed the "The New Way To Work" (#NW2W). At the Scottsdale event, CEO Dean Douglas, who joined the company from Westcon in January, described the three major challenges he faces: building a successful channel, improving the company's North American presence, and moving from a regional to a global company.

[For another opinion on Circuit, see Unify's Circuit Enables A New Way Of Working.]

Unify faces a number of challenges in making Circuit a success. While the capabilities provided are new to Unify, they are certainly not new to the enterprise social software space. In that market, Unify will be going up against the likes of Microsoft, IBM, Jive, Google, and Salesforce.com, all of whose products have a much longer lineage and much broader range of features.

Overall, I agree with the general direction that email, our primary "collaboration" tool today, has become an awkward and inefficient mechanism for collaborating. Unify showed a series of short video vignettes poking fun at the email way of doing things accompanied by the hashtag "#emailfail." 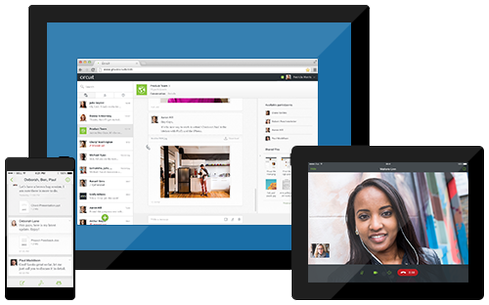 Circuit, developed with the help of Frog Design, organizes work around the paradigm of "conversations" which can be either Open, and available to all participants, or Private. While a conversation could be subdivided into areas defined by subjects, the product designers said that they purposely avoided adding too much structure because they found it caused users to engage less with the product. While initially it feels a little stream of consciousness, there is a very good search tool that allows a user to quickly locate all of the contributions on a particular topic.

Circuit will cost $14.95 per user per month, and along with the collaboration capability, will offer peer-to-peer voice and video, as well as screen sharing. Public switched telephone network (PSTN) access will be provided through a SIP interface that can be used with OpenScape or any SIP-capable telephony platform. According to CMO Bill Hurley, who followed Douglas from Westcon to Unify, the company will be focusing on five key verticals: Higher Ed, Healthcare, Government, Finance, and Manufacturing, with the first two being the key targets.

A lot of the talk was about Unify's program to rebuild its channel presence under executive VP of channels, Jon Pritchard, another Westcon veteran. Finding channel partners that can successfully sell Circuit will be challenging, as it is a completely different offering from the telephony/UC-oriented OpenScape. A social collaboration platform like Circuit is not going to be sold through the telecom group, but rather through the CIO, directly to the line of business managers, and possibly even to HR.

My colleagues at UCStrategies and I have spent a good deal of time talking about the future of work and the types of tools that will be needed to support this new environment. Clearly social-enabled collaborative tools will be at the heart of those next-generation systems, but the transition is taking longer than many of us had hoped. Unify has thrown its hat in the ring, but there are a lot of big hats in there already. I do wish Unify the best with Circuit, but they will have their work cut out for them.

Special thanks to Marty Parker of UniComm Consulting and Blair Pleasant of COMMfusion for their help on this piece.

Michael F. Finneran, President of dBrn Associates, Inc. is a consultant and industry analyst specializing in wireless, mobile unified communications, and fixed-mobile convergence. With over 30 years in the networking field and wide range of experience, he is a widely ... View Full Bio
We welcome your comments on this topic on our social media channels, or [contact us directly] with questions about the site.
Comment  |
Email This  |
Print  |
RSS
More Insights
Webcasts
Strategies for Success with Digital Transformation
Building the SOC of the Future: Next-Generation Security Operations
More Webcasts
White Papers
Zero Trust Evaluation Guide
2020 Gartner Market Guide for Network Detection & Response
More White Papers
Reports
The State of Threat Detection and Response
DNS Network Traffic Volumes During the 2020 Pandemic
More Reports