In the process of transforming its brand and its technology infrastructure, TransUnion has found itself attracting top-notch IT talent normally repelled by the idea of working for a stuffy financial institution. Here's how they did it.

Changing the tires while the car is driving down the road is an apt description of how TransUnion has transformed its infrastructure over the past three years. In the process, the company has implemented a new analytics structure, deployed unified communications tools designed to improve collaboration, experienced a dramatic shift in its ability to hire top-notch tech talent, and completely gutted its office space to create a modern working environment.

TransUnion's efforts to modernize its data analytics structure earned it the No. 6 spot on the 2016 InformationWeek Elite 100. The undertaking, known as the Shared Analytical Processing Environment (SHAPE), was part of a broad transformation that involved rebuilding infrastructure from the ground up.

"We had an infrastructure that was really antiquated, with old big mainframe technology, out-of-date servers, platforms that weren't scalable," said Brian Parchem, TransUnion's SVP of global technology, in an interview with InformationWeek. "We pretty much gutted our whole infrastructure, built a new data center, built out our Mulitprotocol Label Switching [MPLS], and kept the whole business running at the same time."

TransUnion has worked to expand its mission beyond its roots as a credit reporting agency. Its tagline, "Information for good," reflects its goals of applying analytics to products and services offered to consumers and business customers. The Chicago-based company began trading on the New York Stock Exchange in June 2015. It has operations in more than 30 countries.

Key to its emphasis on analysis is the SHAPE initiative, described in a prepared statement as the backbone of TransUnion's new IT organization. The analytics and research environment allows the company to put all of its data, tools, and capabilities into one shared location, from which they can be studied and used by analysts, data scientists, product developers, and quantitative analytics experts.

What used to take four to six weeks is now available on a self-service data basis from 100% of the data (versus sample data). Customer analysis and insights can be generated in days rather than weeks.

[Even the best intentions can go horribly wrong. Read 10 Ways to Doom Your Next Mobile App.]

In the process, SHAPE has become the product innovation hub of TransUnion, used to generate new solutions and services for its customers. For example, the work on SHAPE led to the introduction in March 2016 of Prama, a new product for TransUnion customers.

SHAPE is part of the broader TransUnion technology transformation story. Prior to the overhaul, Parchem said, "everything was very waterfall, a very linear, very serial approach to things. To really drive and change the culture [we had] to bring that fresh, new, [agile] IT delivery mentality to the organization."

The effort went well beyond implementing new processes. The company gutted its old office building to change from what Parchem described as "everyone has an office with a window" to a modern open floor plan. "That culturally changes the dynamic of an organization."

Parchem's team also implemented a unified communications system throughout the organization. "Global collaboration and unified communications have been very similar to things we're doing with big data," he said. "The machine learning and capabilities to find trends and analytics [with SHAPE] is the same thing we're doing with people. We're tying people together to be innovative."

A Polycom RealConnect telepresence system was tied in with Microsoft Skype for Business to enable video collaboration in a variety of formats, well beyond the typical video conference room available at most companies.

"We can videoconference one-to-one, one-to-many. People can use it from home and tie into video conferences in our conference centers," said Parchem. The tools enable knowledge sharing, mobile meetings, and virtual meetings, making it easy for employees to collaborate no matter where they are in the world.

The tool had the unintended consequence of encouraging a more casual workplace. "You can't expect people to be at the end of that video conference at home and not expect them to be in a baseball hat or t-shirt," said Parchem.

At the same time, it also provided flexibility not previous available to workers, particularly in the company's Chicago headquarters. "There was this legacy way of working at TransUnion in Chicago," said Parchem.

"People catch the train. They show up by 9 a.m. Then they have to catch the train to get home. It just wasn't working. If we weren't going to enable people to work from home and get mobile fast, we weren't going to be able to deliver on value to our shareholders and our customers. People didn't have the luxury of working remotely before. Now they do. They work longer hours, you can work globally, and you can leverage your knowledge capital around the globe at any time." 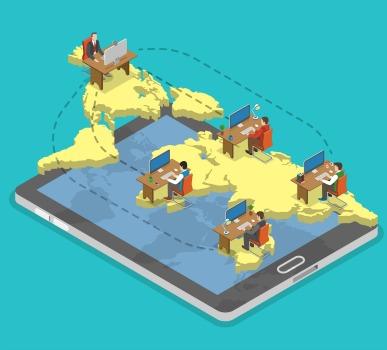 To prepare for the rollout, he said, "we had to build infrastructure from the ground up. A lot of companies try to take solutions and what they try to do is bolt on things to make it work. We were lucky, or unlucky, that we had to build it from the ground up. We needed to purchase network bandwidth and circuits. We had to look at difference suppliers, different strategic partners."

Parchem's team was selective at the outset, because the members knew at the end that the tools needed to be easy to use, at the click of a button, or employees wouldn't use them.

"One thing that surprised me the most was how hard it is to get these video solutions to work when it's one-to-many or many-to-one," said Parchem. "When you're talking about telepresence-to-desktop, or desktop-to-telepresence, those solutions aren't plug-and-play. You really need to understand networking."

A wireless network was already in place, but Parchem said when dealing with video conferencing, Quality of Service (QoS) requires special attention.

"We didn't have an MPLS, so we had to implement that to begin with. We had a lot of static routing, so step one was delivering that MPLS, and we did that very fast. We also had to buy and implement an RMX [Rich Media Exchange] and all the pieces of hardware and software that tie into that. Network bandwidth wasn't an issue, we had network bandwidth, but in smaller countries we had to spend some time working on bandwidth."

From Tech Change to Culture Change

Still, the technology was ultimately not the challenge. As with so many technology changes, the real transformation had to take place on the cultural level. "We rolled out globally and, except for a small pilot, we rolled out in big-bang fashion," said Parchem.

"It took about six to eight months to have the majority of the environment built and delivered and rolled out to 3,000-plus employees at the time. Now, we have about 4,700 users on the system, and there are consultants and some other folks using it as well."

Having senior leaders who embrace technology was a key factor, said Parchem. The company's CEO, James M. Peck, and its chief information and technology officer, Mohit Kapoor, drive the technology vision at TransUnion, and have created a culture that has begun to attract top tech talent.

"At TU, we want you to fail and fail fast," said Parchem. "The more you do that, the better the ideas that come to the forefront. Everybody has a voice. Jim Peck holds breakfasts with computer operators, and everyone feels comfortable talking about those ideas and bringing ideas forward. It's not a hierarchy, it's a true collaborative environment from the top down."

Since he joined the company in late 2012, Parchem said, TransUnion has moved from being perceived in tech circles as a stuffy financial institution to one that is attracting IT job applicants from the likes of Google and Amazon. "I've probably hired a dozen people that I knew previously in the IT world who would have never come here before," said Parchem, "and the difference they made has been tremendous."

Susan Nunziata leads the site's content team and contributors to guide topics, direct strategies, and pursue new ideas, all in the interest of sharing practicable insights with our community.Nunziata was most recently Director of Editorial for EnterpriseEfficiency.com, a UBM ... View Full Bio
We welcome your comments on this topic on our social media channels, or [contact us directly] with questions about the site.
Comment  |
Email This  |
Print  |
RSS
More Insights
Webcasts
Defense and Response Against Insider Threats & User Errors
The Pesky Password Problem: Policies That Help You Gain the Upper Hand on the Bad Guys
More Webcasts
White Papers
5 Key Steps for Assessing Your Security Effectiveness
Top 10 Security Technology Trends to Watch, 2020
More White Papers
Reports
Annual Global State of the WAN
IDC MarketScape: Worldwide Managed Security Services 2020 Vendor Assessment
More Reports

This is a really inspirational story. A great example of how embracing change and adapting the culture of the whole company to embrace technology and a new work environment works in benefit of the organization at every level.