Users of the online telecommunications service Skype have a new option when they want to make calls or hook up with video chat, as the company has released a Web-based beta version of the service.

Windows 10: Sneak A Peek At Your Future PC
(Click image for larger view and slideshow.)

Skype users in the United States and the United Kingdom can now use the service without having to download the application. The service, called Skype for Web, was developed after customer feedback indicated users wanted to be able to call and instant message people when they visited Skype's website.

Current Skype users simply sign into Skype for Web and will see their contacts and conversations load in just a few seconds, so whether they usually use Skype on a mobile, tablet, native desktop app, or a TV, they'll see their latest chats or calls to respond to through the browser.

"Skype for Web is an important step for Skype as we move toward implementing the technology to make Real-Time Communications (RTC) on the Web a reality," Jonathan Watson, Skype's senior product marketing manager, wrote on the company's blog. "Skype for Web is perfect if you normally use Skype on your mobile, but want to quickly get to your calls and IMs on a bigger screen. Or perhaps you're sitting at a Windows or Mac computer in an Internet cafe or hotel that doesn't already have Skype downloaded." 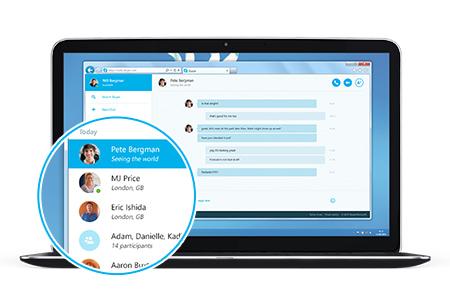 As part of the beta launch, the company has also improved the way users search for people and groups on Skype.

Now, instead of two separate lists for contacts and recent conversations, Skype for Web introduced a single, searchable list in a timeline view.

In addition, the company rolled out notifications on Skype for Web, which users will need to enable when they sign in, so they don't miss incoming instant messages or audio and video calls -- even if they're using another app or viewing a different website in another browser window.

The beta release follows Skype's announcement of an update to Outlook.com that features a refined inbox, upgraded calendar, and new version of Skype.

This updated version of Skype, which is also still in the beta phase, is designed to make it easier for users to use Skype together with their inbox.

Since its $8.5 billion acquisition of Skype in 2011, Microsoft has been steadily rolling out updates to the service, including Skype 4.0 on TV, a collaboration with Samsung's camera-equipped television sets, and enhancements to the service for iPhone and Android smartphone users.

With Skype as part of Microsoft, and Microsoft looking to expand the research of collaboration and productivity applications beyond traditional Windows users, it's no surprise that the company is trying to make Skype easier to use, and available to many more people.

[Read more about Skype for Business.]

In April, Microsoft officially released Skype for Business, turning the tool into an enterprise app, especially with its integration into Office 2013.

While Microsoft has tried to keep Skype as a separate group, this slow type of integration is a way to help build out the user base, a strategy that CEO Satya Nadella has made clear, with an emphasis on cloud computing and mobility that will eventually overshadow traditional desktops.

Nathan Eddy is a freelance writer for InformationWeek. He has written for Popular Mechanics, Sales & Marketing Management Magazine, FierceMarkets, and CRN, among others. In 2012 he made his first documentary film, The Absent Column. He currently lives in Berlin. View Full Bio
We welcome your comments on this topic on our social media channels, or [contact us directly] with questions about the site.
Comment  |
Email This  |
Print  |
RSS
More Insights
Webcasts
Strategies for Success with Digital Transformation
5 Steps to Solving Modern Scalability Problems
More Webcasts
White Papers
How to Prioritize Risk Across the Cyberattack Surface
The 2020 Duo Security Trusted Access Report
More White Papers
Reports
The Drive for Shift-Left Performance Testing
Special Report: The Changing Face of Threat Intelligence
More Reports

It might have been that Appear.In was forced upon employees because, Skype was not on WebRTC. Now that the WebRTC version has been released, things could change.

Agreed -- there is hope and millions of user will welcome Skype on their Chromebook. In the meanwhile, I can't have but wonder whether there are hard technical problems associated with enabling Skype on the ChromeOS or the lack of availability is due to Google pushing Hangout over Skype and Microsoft pushing Windows/iOS/Android -- every OS expect for the ChromeOS.
Reply  |  Post Message  |  Messages List  |  Start a Board

That is an interesting point. I will have to test the web version of Skype on a mobile device to see whether it is capable of taking control of all the sensors. For instance, if the face sensor is not accessible by the software then, it would create some problems.
Reply  |  Post Message  |  Messages List  |  Start a Board

I liked the UI update when Skype came out with a new version for Mac recently. But I have to say, isn't it a bit late for Microsoft to be releasing Skype for web?

I guess now is better than never, and I could see a lot of integrations being implemented between Skype for web and some of Microsoft's other product offerings. Because I don't see user behavior changing in a way where people are going to go in droves to the Skype website for calls, messaging and video chat.
Reply  |  Post Message  |  Messages List  |  Start a Board

I tried to use my Skype account on my ChromeOS devices (I have a Acer Chomebook and a Cromebox). It says that is not available for my devices yet. There is hope!
Reply  |  Post Message  |  Messages List  |  Start a Board

The web-based version should be handy to use. But as a mobile internet fun, I prefer to have an Android/iOS app installed so that I can use it to make phone calls.
Reply  |  Post Message  |  Messages List  |  Start a Board

For some *strategic* odd reason, our corporate IT administration has disallowed SKYPE.

We are forced to use Appear.In - a web RTC app. Works most of the time. Sucks some of the time.

So I believe this will get very popular, very quickly.

Its good to see Nadella's trategy of opening up Microsoft's Walled Garden getting full execution across all its acquisitions.
Reply  |  Post Message  |  Messages List  |  Start a Board

Google demonstrated the power of WebRTC by creating the Cube Slam game. Skype on WebRTC is another and extremely useful addition of software on WebRTC. However, it will be interesting to see if this will enable Skype to function on a Chromebook.

If Skype is not supported at the moment through WebRTC on a Chromebook then, I guess users will have to wait a little more for full android app support to be enabled on Chromebooks.
Reply  |  Post Message  |  Messages List  |  Start a Board
Editors' Choice
Hot Topics