Microsoft this week announced smart capabilities arriving for Outlook in 2016, a new security policy, and a Surface Hub delay along with a price increase.

Redmond decked its (busy) halls this week with a security policy update, features coming to Outlook.com and Outlook for Web, and its latest mobile-focused acquisition. We also learned the company has delayed the release of Surface Hub while raising its price by $2,000.

Talko is an enterprise mobile messaging service intended to give mobile employees a means of calling, texting, and sending picture and video messages to their colleagues. The tech and team behind the service will be integrated into Microsoft's Skype team and continue working on the Skype and Skype for Business platforms.

Outlook was one of the many Office apps that got a facelift when Microsoft released Office 2016 for Mac and Office 2016 for Windows earlier this year. Now we've learned the updates will continue rolling into the New Year.

The smart address book aims to save you from making common email slip-ups, such as forgetting someone's name spelling, neglecting to add someone to a list, etc. To save time when choosing recipients, enter the To: or Cc: lines for a drop-down list of suggested contacts, which are chosen based on your most recent and frequent contacts.

Outlook will also alert you if you misspell the name of a frequent contact. If you type "Kathryn" but typically write to "Catherine", it will ask if you want to change the name. It will also suggest names if it thinks you're forgetting someone in your usual group emails.

A new feature for air travel will automatically source flight confirmation emails (from supported providers) and add the details into your Outlook calendar. The calendar event will be blocked off and include your airport, flight number and destination; you'll also receive a reminder email three hours before takeoff.

If you want to dig out "events from email", go to the Settings icon > Options > Calendar. In the future, Microsoft promises to provide more airline providers and do this for events beyond flights.

These features will begin rolling out in Jan. 2016 to Office 365 First Release customers and the new Outlook.com (in preview). General availability is anticipated in March 2016.

Microsoft has also pushed back the shipping date for its Surface Hub, its massive enterprise productivity device. It was originally supposed to ship Sept. 1, which was delayed to Jan. 1, and has now been delayed to ship sometime during Q1 2016, Petri reported. 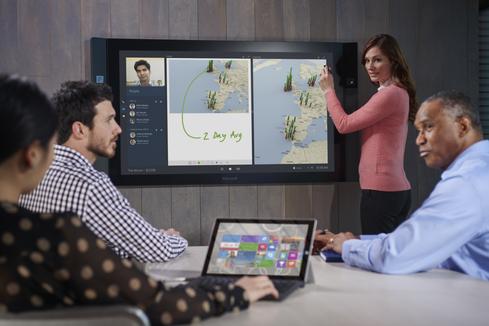 On the security front, Microsoft this week announced plans to block "man in the middle" (MiTM) adware starting in March 2016. Some of these adware techniques include changing DNS settings, injection by proxy and network layer manipulation, said Microsoft. MiTM attacks typically lead to breaches and poor user experience.

To give more control to users and make it harder for adware builders to interfere with Web browsers, Microsoft is updating its Adware criteria "to require that programs that create advertisements in browsers must only use the browsers' supported extensibility model for installation, execution, disabling, and removal," it reported.

Kelly Sheridan is the Staff Editor at Dark Reading, where she focuses on cybersecurity news and analysis. She is a business technology journalist who previously reported for InformationWeek, where she covered Microsoft, and Insurance & Technology, where she covered financial ... View Full Bio
We welcome your comments on this topic on our social media channels, or [contact us directly] with questions about the site.
Comment  |
Email This  |
Print  |
RSS
More Insights
Webcasts
People Are The Most Important Part of Autonomous SOC
Don't Miss This Cybersecurity Virtual Event
More Webcasts
White Papers
Trustwave Global Security Report
Accelerate Threat Resolutions with DNS
More White Papers
Reports
The State of Cloud Computing - Fall 2020
How IT Security Organizations are Attacking the Cybersecurity Problem
More Reports