Microsoft has released Office for Android tablets and Outlook capabilities for iOS and Android devices. Here's a closer look. 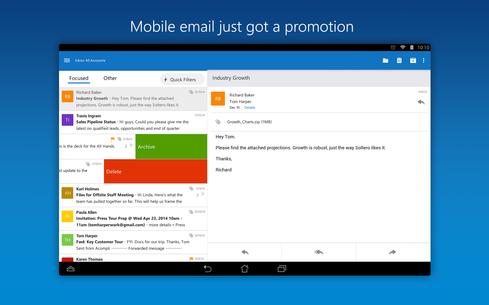 Earlier this week, Microsoft unveiled a number of updates to its mobile productivity apps. The new version of Office for Android tablets exited its three-month preview period on Jan. 29, the same day that Outlook apps for iOS and Android were released in full and preview versions, respectively.

Its latest announcements indicate that Microsoft is dedicating extensive effort towards boosting productivity before, during and after typical workday hours. Rather than sorting through emails during their commute and leaving the more complicated tasks to their PCs, professionals can schedule meetings and attach files on the go.

Both Android and iOS users had the opportunity to download a new version of Outlook. The app was released in full for iPhone and iPad. A preview is available to Android users, presumably because it still needs to undergo further testing.

The new Outlook is designed with new features that allow users to easily prioritize, delete and respond to emails. The updated calendar simplifies the process of finding time to coordinate meetings, interacting with hosts and attendees, and sending RSVP messages.

The new app coordinates with OneDrive and Dropbox to provide users access to documents, spreadsheets and presentations that they create through apps available on the Office suite. Its Android-compatible apps are similar to their iOS counterparts; both are created from the same code base. With this release, Microsoft has officially made its Office suite available on all major mobile platforms.

Microsoft's new productivity apps sound like they're worth downloading, but when it comes to describing their many new features, words can only do so much. Click through to learn more about what's in store for the new Office and Outlook apps before trying them on your own device.

Getting hacked isn't the issue. It's the fact that those passwords are what's most likely used in the corporate environment. This essentially means MSFT may know corporate user login information. Whether it gets hacked is not the concern. It's the breach of credentials that is.
Reply  |  Post Message  |  Messages List  |  Start a Board

That' why a lot of organizations use MDM software like Airwatch & GOOD to restrict what can be installed on corporate use devices. Most people won't like it if BYOD is in use. That's why a lot of people use multiple mobile devices.
Reply  |  Post Message  |  Messages List  |  Start a Board

I believe there's been updates but no clear answer if this flaw is no longer an exploit. The non-MSFT penetration testers will probably be better suited to answer this question.
Reply  |  Post Message  |  Messages List  |  Start a Board

Correct. I mean it's in the use agreement, but most people don't read it!
Reply  |  Post Message  |  Messages List  |  Start a Board

Why is no one talking about Contacts?  Outlook Preview for Android doesn't access contacts as stored with the email account.  Instead it builds a list of recently used email contacts, and you don't anything additional data you may have stored, such as phone numbers, addresses, notes, etc.  As soon as I installed this app, all the contact names in my SMS app disappeared, replaced with only meaningless phone numbers.

Talk about COLOSSAL FAIL.  How can you use this app without Contacts?  I uninstalled it within 5 minutes.  I am stunned this hasn't been talked about.
Reply  |  Post Message  |  Messages List  |  Start a Board

I am not sure how Outlook and other Office components will perform on iOS and Android. But I think MS is taking the right approach to embrace mobile computing trend. In the near future people will do more work on mobile phone/tablet than on normal PC. I do hope it will become better and better by integrating more existing functionalities.
Reply  |  Post Message  |  Messages List  |  Start a Board

Email folders have been around for a long long time, way before there was even a Gmail or even Google.
Reply  |  Post Message  |  Messages List  |  Start a Board

It's too early to say. Anything that allows for better functionality is going to be preferred to a ported application that does basic functionality. Personally, I'm curious to see if I can get CRM integration in the outlook app. If so, it's a huge win for me as it moves away from multiple applications and a disconnected workflow.
Reply  |  Post Message  |  Messages List  |  Start a Board

Whenever you introduce a new application into your workflow, absolutely. Take your time to do the right security audits. It's better to know what your vulnerabilities are than to just go ahead and implement an application right away. With the rise of BYOD and the fact that the standard perimeters we are used to are now changed due to cloud applications, applications are sadly one of the worst points of attack due to non-standardization of apps across platforms. It's easier to secure a laptop sitting in the corporate network than an app out there in the wild.
Reply  |  Post Message  |  Messages List  |  Start a Board