Leaks suggest that after a four-year wait, a new version of Microsoft Office for Macs is on its way. Until then, OneNote updates will have to do.

Microsoft this week released updates for both the iOS and OS X versions of OneNote. The enhancements arrived as rumors swirl around the next version of Office for Macs, alleged screenshots of which recently leaked online. Microsoft released Office 2013 for Windows early last year, but the most current version for Mac users is four-year-old Office 2011.

With the new OneNote releases, Microsoft continues to emphasize its free note-taking app as a pillar in CEO Satya Nadella's cross-platform software strategy. Although the company has been slow to update mainstream Office apps such as Excel for Mac users, this week's releases marked the second time in three months that Microsoft has pushed OneNote improvements to Apple customers. Microsoft also supports OneNote on Google platforms, including the relatively nascent Android Wear, and even Amazon's flailing Fire Phone.

By aiming the free note-taking app at so many users, Microsoft hopes to persuade more users to pay for cloud services with which OneNote closely ties, such as OneDrive and Office 365. That plan hits some snags for Mac users, however, as Office 2011 grows longer in the tooth. According to the new rumors, the next version of Office for Mac might not arrive until the first half of 2015.

In the meantime, Apple's iWork applications, which are free to new iOS and Mac customers, continue to improve, thanks to features such as Handoff, which lets users seamlessly continue working as they move from a Mac to an iOS device, or vice versa. Mac sales are growing much faster than those of Windows PCs, which raises the stakes for a new Office for Mac release. 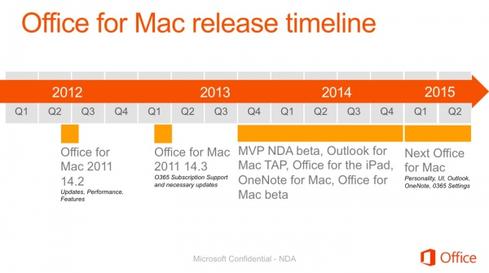 An alleged leaked slide from a Microsoft presentation shows a new version of Office for Macs due out early next year.
(Source: CnBeta)

Released in two batches by Chinese website CnBeta, the leaked screenshots of the next Office for Mac include, not only images of a revamped interface, but also purported slides from a Microsoft presentation that peg release for the first half of next year. This claim contradicts earlier reports that the apps will hit the market this year. Microsoft reps have declined to discuss the next version of Office for Macs, other than to confirm that it's coming.

The screenshots suggest the updated apps will sport a new look optimized for Retina screens, as well as all the Office 2013 features that have been available to Windows users for more than a year and a half. The leaks also claim that next-gen Office apps for Macs will be more closely tied to the cloud -- not surprising, given that the software likely will be offered both as a standalone product and a component in Office 365. The slides suggest Outlook for Mac will be thoroughly revised, including the ability to integrate with OS X's Notification Center. 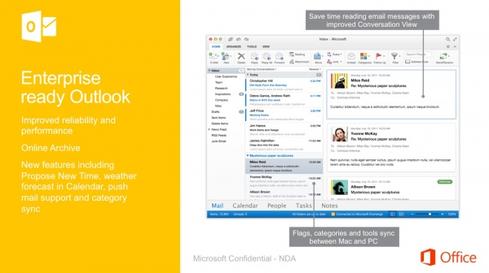 The leaked slides suggest the Mac version of Outlook will get a particularly big overhaul.
(Source: CnBeta)

Office GM Julia White confirmed this week that the next version of Office for Windows will arrive in the second half of 2015. It's not clear whether Office for Mac will continue to run a generation behind the Windows version, as has been the case. Microsoft recently announced that Office 365 soon will gain built-in mobile device management capabilities, but the company hasn't revealed much about changes coming in the next Office for Windows.

Microsoft also is working on a touch-first version of Office for Windows tablets and hybrid devices. A version for Android tablets is also in the works and

I do. To me, that's what Office 2011 for Mac feels like. This alleged update cannot come soon enough, to be honest. I'll say freely that I actually like MS Office, but the Mac version is a nasty blend of Microsofts new paradigms (the ribbon), Mac design (the menus) and Office 97 (the menubars with icons on them that aren't the ribbon). I am sick and tired of hunting around for where a particular function happens to be located. A new, clean, UI is the very least we should expect from the next update. Some feature parity with Office2013 wouldn't go amiss either.

After all, it takes the shine of my "I've got OS X and you have Windows" taunting when they can just say "Office2013, Visio" back.
Reply  |  Post Message  |  Messages List  |  Start a Board

Only somehow they /don't/ lose their market because there really isn't a good alternative, and (like it or not) MS Office is a corporate standard worldwide. I've tried some of the free alternative office solutions and I was ready to put my fist through the screen with each of them within a week. The supposed compatibility with the de facto standard .DOCX (or .DOC before that) formats was painfully incomplete, and the inability to render a document the same way in each system made editing in a heterogenous software environment basically impossible.

What they end up with is a bunch of really ticked off Mac users wondering why Microsoft favors Windows users so much, almost like they make money from i... uh, wait a moment. Yeah, ok, I see that.

They should not slack out  on the upgrade for their Office products for the mac users, as they are still popular and many mac users are ready to use if they come out with their newest version for Mac too, otherwise they are soon going to lose their market as the young generation of people are for the Mac!
Reply  |  Post Message  |  Messages List  |  Start a Board

I'm surprised MS has been slacking on the mac version of office. If they keep as current with the mac version as they do with it's own they would appeal to the mac world. Then again I'm thinking maybe the mac users don't care?
Reply  |  Post Message  |  Messages List  |  Start a Board
Editors' Choice
Hot Topics

11 Ways DevOps Is Evolving Lisa Morgan, Freelance Writer,  2/18/2021
White Papers
Why Add Security to Your Skill Set and How to Do It
2021 SANS Cyber Threat Intelligence Survey
Are We Cyber-Resilient? The Key Question Every Organization Must Answer
5G-Enabled Edges of Tomorrow Require Converged Network and Security
Balancing Hybrid Storage as Part of a Hybrid Cloud Data Management Strategy