0%
Tweet
Microsoft has convinced 20 more Android tablet OEMs to install its Office productivity software on their devices. It's a smart move by Redmond.

Microsoft has won over more tabletmakers in its bid to increase adoption of Office on mobile devices. This week, Redmond announced that 20 OEMs have agreed to install Microsoft's productivity apps on their tablets, a sign that the software giant is finally making the right waves in mobile.

Microsoft's new tablet partners come from near and far.

Some of the most prominent include Haier, LG, Prestigio, and Sony. These 20 new firms join 11 others, including Dell, Pegatron, and Samsung, that made similar commitments earlier this year. All 31 of the tablet builders will preload Word, Excel, PowerPoint, OneNote, OneDrive, and Skype on their hardware in the near future.

Microsoft's aggressive push onto competing platforms clearly spells out its goal for Office to be the default productivity tool for mobile workers. The company has systematically improved Office for mobile devices -- including those running Android and iOS -- and now offers feature-rich versions of these core apps for free. 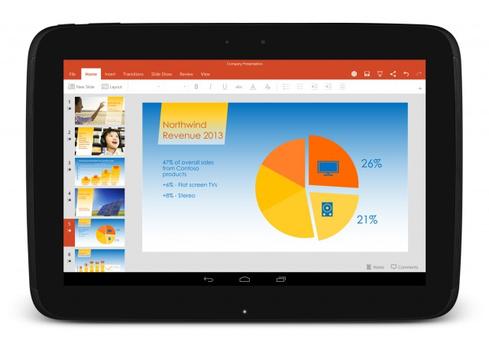 More importantly, Office has been reengineered for touch-based devices. The most recent versions of Word, Excel, PowerPoint, OneDrive, OneNote, and Skype are touch-friendly and support mobile document creation, editing, and management.

"Our strategic agreements with these partners demonstrate how Microsoft is leveraging the scale of the hardware ecosystem, and working with partners in new ways to deliver rich experiences to our customers," wrote Nick Parker, Microsoft's corporate vice president for Original Equipment Manufacturer Division, in a May 26 blog post. "This is a cornerstone of our cross-platform services strategy, to bring an array of Microsoft services to every person on every device. By pre-installing Microsoft software and services solutions on Android tablets, our partners are able to increase the value of those devices by delivering the rich productivity experiences customers want."

Office is a highly visible product, of that there is no doubt.

Let's not forget, however, that Google has its own productivity apps based around its Google Drive product. Google Docs, Sheets, and Presentations are capable in their own right and are backed by the power of Google's cloud services. Google's productivity suite is also free to Android tablet owners.

Both Office and Drive are available to Apple's iPad and iPhone, as well, but Apple will never consent to preloading them. Apple would prefer owners of its tablets and smartphones use its own iCloud service and Pages, Numbers, and KeyNote -- all of which are available to its mobile and desktop machines.

Microsoft is smart to go after Android tablets.

Android tablets continue to make gains against Apple's iPad in the global market, while Microsoft's own Surface tablets still have a long way to go to match the adoption rates set by Android or iOS. With 31 OEMs prepared to put Office on their devices in the next few months, Microsoft has done what it can to maximize the potential footprint of Office users around the world.