The Hyperlapse apps from Microsoft transform clunky videos into seamless time-lapse ones across Windows, Windows Phone, and Android devices.

Microsoft has announced the release of Microsoft Hyperlapse, video technology developed to accelerate and streamline clunky, shaky first-person videos into steady time-lapse ones.

This isn't the first time Microsoft has talked about its hyperlapse project. The company first introduced the idea of hyperlapse technology in a research paper released in August 2014. Microsoft researcher Johannes Kopf acknowledged a problem with his own videos, which he described as "hours long and just dead-boring to watch."

In an effort to make consumer-produced videos more entertaining, Microsoft adopted the goal of providing technology to accelerate them. Its hyperlapse videos are inspired by time-lapse photography, which combines and animate a series of pictures taken over a period of time.

The difference is, traditional time-lapse creations are composed of static images. Hyperlapse videos put a fast-forward effect on long videos to present them as shorter bursts of action. So rather than showing your family a three-hour film of your Grand Canyon hike, you could show them a three-minute clip instead.

Hyperlapse was merely a research topic at the time of the August paper's release. After more than 20 years of research in computational photography -- a series of methods in processing photos and videos -- it has become reality.

To process videos, the research team developed an algorithm that develops a 3D model of the scene and pinpoints the path that the camera takes. From there, the video frames are streamlined to create a smooth clip that serves as a faster and more condensed version of its original but doesn't lose the overall message.

Microsoft is rolling out Hyperlapse in thee iterations. First is Hyperlapse Mobile, which is currently available on Windows Phone and in preview mode on Android. The mobile version condenses longer video clips into short clips that can be saved and shared at a variety of speeds. 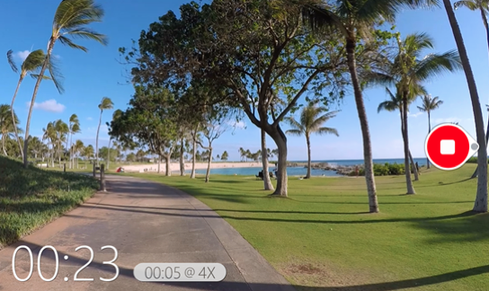 Notably, Microsoft has not released a version of Hyperlapse that is compatible with iOS devices. Apple fans have Instagram, but the two media manipulators are markedly different. Instagram's iteration of hyperlapse is only used to record videos, for example; Microsoft's program can be used to alter video that already exists.

Hyperlapse Pro, designed for Windows desktops, delivers significantly more power and enables video professionals and enthusiasts to create hyperlapses shot on a variety of cameras and devices. It's currently available in preview but will eventually become available to paying customers who need a high-end video editing program. Details on price were not released.

The third version, Hyperlapse for Azure Media Services, is powered by cloud and enables developers to build the technology into apps and websites. It's available in preview for customers holding Azure Media Services accounts, though programs are currently limited to videos of 10,000 frames.

Kelly Sheridan is the Staff Editor at Dark Reading, where she focuses on cybersecurity news and analysis. She is a business technology journalist who previously reported for InformationWeek, where she covered Microsoft, and Insurance & Technology, where she covered financial ... View Full Bio
We welcome your comments on this topic on our social media channels, or [contact us directly] with questions about the site.
Comment  |
Email This  |
Print  |
RSS
More Insights
Webcasts
How Elite Analyst Teams are Transforming Security with Cyber Reconnaissance
Making Cybersecurity Work in Small and Medium-Sized Businesses
More Webcasts
White Papers
Managing OTT Content Distribution in the Connected World
Seven recommendations for a Successful SD-WAN Strategy
More White Papers
Reports
The Malware Threat Landscape
The Future of Multi-Cloud Networking 2020
More Reports

Haha oh the potential for Hyperlapse experiments. On the flipside, it could also look like you strapped a GoPro to a cheetah and sent it running through the wilderness.
Reply  |  Post Message  |  Messages List  |  Start a Board

I wonder, if you drank a lot of coffee, filmed your over-caffeinated hike, and processed it with Hyperlapse, would the resulting video look as if it were playing back at normal speed?
Reply  |  Post Message  |  Messages List  |  Start a Board

I'm confused. Is this going to just make everything look like a Benny Hill sketch? And for those to young to remember Benny Hill, I was going to link to one, but I can't seem to find one that doesn't involve someone losing their clothes.
Reply  |  Post Message  |  Messages List  |  Start a Board

Cool as the technology is, there's something sad about the need to compress video time. We've made it easy to create videos but editing remains a challenge.
Reply  |  Post Message  |  Messages List  |  Start a Board
Editors' Choice
Hot Topics