If the Delve Office Graph was Microsoft's idea of Facebook for Office users, Delve boards are Pinterest for productivity.

Delve boards, announced Wednesday on the Office blog, let Office 365 users group related content, such as information related to a particular project, for easier discovery. In other words, Delve boards are a tool for curating content rather than relying entirely on search and social signals to help users find the information they need. 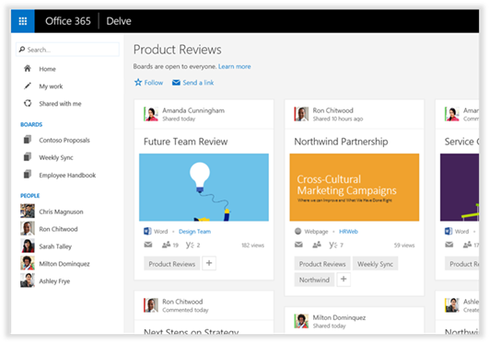 Instead of being listed like search results, Delve content items are displayed as "cards" with image previews of their contents and social features such as "likes," tagging, and sharing. The Office Graph uses machine learning algorithms to find interesting content, based primarily on activity in Office 365 SharePoint Online team sites and OneDrive for Business.

[Which communications technologies will gain traction in the coming year? Read Enterprise Communications Trends In 2015. ]

Despite the obvious overlap with Yammer as Microsoft's enterprise social networking technology, the Office Graph is separate from the Yammer social graph. However, signals from Yammer -- as well as email-based collaboration through Exchange, will be incorporated into a future release. The Office Graph has the advantage of tapping user interaction with content outside the bounds of Yammer.

Delve is part of a broader strategy of packing more innovation into the Office 365 platform.

The first demos of Delve showed how it can surface individual Office documents or other content items tracked by SharePoint. Delve boards will make it easier for users to find collections of related content that others have taken the time to organize.

Office 365 users enrolled in Microsoft's First Release program will begin getting access to Delve, including the boards feature, this month, and other Office 365 users will see it added in early 2015, according to Microsoft.

David F. Carr oversees InformationWeek's coverage of government and healthcare IT. He previously led coverage of social business and education technologies and continues to contribute in those areas. He is the editor of Social Collaboration for Dummies (Wiley, Oct. 2013) and ... View Full Bio
We welcome your comments on this topic on our social media channels, or [contact us directly] with questions about the site.
Comment  |
Email This  |
Print  |
RSS
More Insights
Webcasts
Building Asset Management into Your Enterprise Security Strategy
SASE: The Right Framework for Today's Distributed Enterprises
More Webcasts
White Papers
WhiteHat Professional Services Package
Smart Service Management: Working Better Together with a Connected Enterprise
More White Papers
Reports
The State of CCPA 2021
2021 Top Enterprise IT Trends - Network Computing
More Reports

I think Deleve boards would be extremely useful. I spend way too much time searching for things that I can remember seeing but no longer know where they are. A work-related, "you might be interested in these docs as well" would be quite helpful, if it works as advertised.
Reply  |  Post Message  |  Messages List  |  Start a Board

@danielcawrey- I would find this useful in a corporate wiki environment. Lots of times, i find I'm redoing work that has been done elsewhere in the company or that people in the company are syaing things I wish I knew. But I never see it in the wiki or via email or whatever because you could spend your whole life just following a corporate social media solution.
Reply  |  Post Message  |  Messages List  |  Start a Board
InformationWeek Is Getting an Upgrade!