50%
Tweet
Google's Inbox pushes its next-gen email concept at consumers. Microsoft's Delve is doing the same thing with business customers. Will it cause IT headaches when the services butt heads?

If you've ever frantically tried to find an important email on your phone, you've no doubt confronted the ugly truth about email in the mobile era: Our inboxes have simply become too bloated and confusing to be efficiently managed when time is tight.

Both Google and Microsoft recently revealed new products -- Inbox and Delve, respectively -- that are designed to help users cut through the noise. Though quite different in implementation, both products project the same philosophy -- that email should be more social, agile, and personalized than it is today.

To create this smarter email experience, each company is integrating machine learning into its product. The promise to users is that they won't have to wade through thousands of inbox messages when looking for important content; rather, they'll be able to rely on contextually aware email products to automatically surface the right information at the right moment. As such, Microsoft and Google aren't merely experimenting with new apps; each is also hoping to demonstrate that its backend engine is the best equipped to learn how people work and to provide intelligent assistance.

Despite ostensibly similar aims, the companies are approaching the issue from opposing directions. With Inbox, which is currently available only by invitation, Google is focused on consumers, with no word yet on when the new app might support enterprise accounts. Microsoft, in contrast, is currently rolling out Delve only to Office 365 customers, without word when the technology might trickle down to the company's consumer services. Delve is also currently available only for desktops, with mobile support coming later, whereas Inbox is available for both mobile devices and (via the Chrome browser) PCs, with an emphasis on the former. 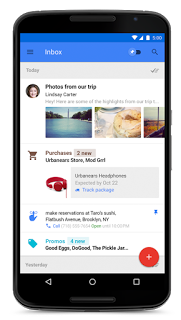 The apps also offer different levels of functionality, with Delve providing more options to dig into and explore content. But UI differences and feature set depth aside, Delve and Inbox are built on many of the same ideas.

Neither product is designed to replace email, per se, but rather to provide a new way to interact with the content that accrues in our inboxes. Both products also feature a social-inspired interface, with information collected into a newsfeed-like stream. This UI not only lets users see important information with a quick glance, but also redefines email organization. Rather than displaying messages chronologically, each product instead attempts to bundle messages into useful collections, and to show content when it's useful, not just as it arrives in the inbox.

Delve, for example, can recognize when a user is headed to a meeting. Using calendar information, it can also see other meeting attendees and agenda notes. Using this information, Delve automatically generates notes that the user can review while walking to the meeting. Inbox, meanwhile, might recognize that the user has a set a reminder to make a reservation at a particular restaurant or that an email references a flight-departure time. When the reminder comes due, the app would not only notify the user, but also present useful information, such as the restaurant's phone number. Similarly, when it's time to leave for the airport, Inbox might provide directions or the flight number.

Both apps also require a degree of user trust. Inbox is in many ways a combination of Google Now and Gmail, which means that the app will only learn when to present useful information if users share their locations and inbox contents with Google's algorithms. To provide useful and timely content, Microsoft's Delve similarly needs to know when and on what the user is working, and with whom she's collaborating.

It's also notable that both apps are cross-platform plays, rather than attempts by Google and Microsoft to fortify their respective OS ecosystems. Apple has also been implementing email improvements, such as the "handoff" feature that lets users began a message on one device and seamlessly continue on another. But Apple's aim is to ingrain users in its first-party ecosystem, whereas Microsoft and Google, evidently more interested in simply amassing users, have more firmly separated their email efforts from their OS projects.

By choosing to target different sorts of customers, Google and Microsoft might be setting the stage for tensions down the line. At this point, Delve is arguably more polished and fully featured; beyond email, it also displays content trending around the user, such as documents that collaborators have shared. If Microsoft's machine learning fabric is as good as advertised, the app could significantly change the way people organize their work schedules. But by focusing on consumers, Google could achieve a larger user base relatively quickly. If Inbox gains traction, businesses could to face more of the same "Bring Your Own" challenges they do today -- e.g., the organization wants to use Delve, but many employees are already accustomed to using Inbox.

Granted, Delve is at this point much more enterprise-focused, but if there's any type of product that tends to blur the line between our home and work lives, it's email. Microsoft no doubt knows that Delve will spread into users' personal lives; indeed, consumer products such as Windows Phone assistant Cortana rely on some of the same machine learning technologies as Delve, and shows that Microsoft is already thinking of ways to apply its new ideas on both sides of the consumer-professional divide. Google, meanwhile, has always gone after businesses by playing up its widespread consumer adoption -- and if Inbox is a popular hit, some version of the app will surely appear for businesses.

These are early days for both products, and it remains to be seen if either lives up to its creator's ambitions. Microsoft and Google have more resources than most companies, but they'll face potential disruption from hungry email startups. Apps such as Mailbox and Zoho already implement some of the ideas that Google is promoting with Inbox, such as closer integration between reminders and emails. But with big players focusing more effort on email, workflows will likely change sooner than later. Will modern email apps make enterprise workers more efficient? Will a consumer app such as Inbox create IT management challenges? Sound off in the comments to let us know what you think.

Michael Endler joined InformationWeek as an associate editor in 2012. He previously worked in talent representation in the entertainment industry, as a freelance copywriter and photojournalist, and as a teacher. Michael earned a BA in English from Stanford University in 2005 ... View Full Bio
We welcome your comments on this topic on our social media channels, or [contact us directly] with questions about the site.
Comment  |
Email This  |
Print  |
RSS
More Insights
Webcasts
[Virtual Event] Doing More IT With Less
How Cyber Attackers Will Use & Abuse AI, ML Against the Enterprise
More Webcasts
White Papers
Getting The Right Cloud Management
The Value of Multi-Vector Protection on the Endpoint
More White Papers
Reports
State of Cybersecurity Incident Response
Developing and Maintaining Secure Applications
More Reports

Neither Google's Inbox nor MS's Delve are necessary to organize email meaningfully - just use Evernote.  It does anything you can possibly conceive either intrinsically or with an app repository such as IFTTT.
Reply  |  Post Message  |  Messages List  |  Start a Board


Will it cause IT headaches when the services butt heads?

This is a very relevant question to techies because from what I recall these two  ( MS  and Google ) do not work very well together and as a result I feel a headache coming on.


I am glad to see real competition and innovation coming to the realm of email.   There is no reason to reinvent the wheel, but some " fine tuning and practical enhancements" are always welcome.

I don't really see any need beyond what we already have.  Sure, the 1000 of 1020 emails which haven't been read need to be handled some way (they just can't go in the trash, can they?).  If you really have need for 1000+ e-mails to be readily accessible, you probably can afford to pay for a really great e-mail client for your phone.
Reply  |  Post Message  |  Messages List  |  Start a Board

Whenever I contrast my Gmail account to a corporate email (run by Outlook), Gmail always wins in easy of use, especially in search. Microsoft may yet win here yet I wonder if they can compete or build something comparably strong to Google's email search.
Reply  |  Post Message  |  Messages List  |  Start a Board

I've always felt that email programs did not understand communication. They are rigid, treating messages as files, with all the restrictions that come with that. All the interfaces have basically been the same -- linear and brittle, giving the user little flexibility to turn that flow of communication to meet their needs. Certainly they have not been agile.

Now we have a new machine-based approach. We've had other ones, maybe these are better. Maybe not. As long as we look at email as "content" and not a "message" we may be headed down the wrong road.

And didn't "invitation only" used to be called "Beta test"?
Reply  |  Post Message  |  Messages List  |  Start a Board

Google moved into email long after other vendors should have sued up the market. Not it's moving into advanced email with a brand that, let's say, appeals to the iPhone user. I would ask, who's winning the mobile war and use that as a clue as to what the future portends in this contest.
Reply  |  Post Message  |  Messages List  |  Start a Board

It appears that the approach taken by Google and MSFT are from two different angles -one is trying from enterprise side and other from consumer side. And, both are willing to 'spill in' to the other side. At this moment, the ideas are appeliing. If they really work, the office culture (and daily lives) are going to change a lot.
Reply  |  Post Message  |  Messages List  |  Start a Board

I'm interested to see how this will play out between Google and Microsoft. Email is still a big part of my daily communications, both personally and professionally. Dealing with the volume is a challenge, especially for finding critical information. If the respective tools are really able to deliver what is promised, then this should be welcome news to most email users.
Reply  |  Post Message  |  Messages List  |  Start a Board
Editors' Choice
Hot Topics