The Royal Bank of Scotland sees value in Facebook as an enterprise communication tool, and plans to roll out the Facebook at Work app to 100,000 employees worldwide.

In the latest repudiation of costly, complicated enterprise software, the Royal Bank of Scotland has agreed to deploy Facebook at Work to facilitate online communication among the bank's 100,000 employees.

The company claims it is the first bank and the largest employer to date to do so.

Facebook at Work differs only slightly from the version of Facebook used by almost 1.5 billion people every month around the world. It has an alternate color scheme, white instead of blue. It requires users to have a separate work account. There are no ads, but it retains familiar services like Events, Groups, News Feed, Messenger, Notifications, and Search. Its intent, to promote information sharing among users, remains the same.

[These apps will only cost you the time it takes to download them. Read 10 Handy iPhone Apps Worth Downloading.]

RBS began testing Facebook at Work in July. According to a company spokesperson, the pilot test went well. RBS employees needed no prodding to engage through social networking. Approximately 90% of employees in the trial used the desktop version, and 80% used the mobile version, the spokesperson said. 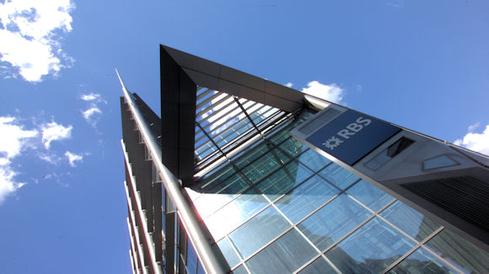 Deployment costs look particularly appealing. Because many RBS employees were already familiar with Facebook through personal use, there was no need for training. What's more, Facebook at Work is presently free.

Facebook hasn't disclosed its monetization model yet, but it could charge for connecting to other enterprise services, for administrative controls, for yet-to-be-developed applications, or for meeting specific compliance requirements.

"Information shared on the site will be safe, secure, and confidential," RBS said in a statement.

RBS chief administrative officer Simon McNamara said he's been using Facebook at Work and found it to be useful as a way to exchange information with team members. "I'm excited about how bringing people together from all across the bank through Facebook At Work can help our employees do their job better -- whether it's being able to find answers to customer queries much faster or helping us come up with bright new ideas," he said in a statement.

RBS said it will offer Facebook at Work to 30,000 employees by March, and to the remainder of its staff by the end of 2016.

Consumer affinity for Facebook could encourage interest in Facebook at Work among companies, particularly if the medium promotes positive engagement with customers. The fact that so many people readily use Facebook suggests that many might willingly to do so in a commercial context, particularly if alternative platforms for interaction impose a less intuitive interface.

Thomas Claburn has been writing about business and technology since 1996, for publications such as New Architect, PC Computing, InformationWeek, Salon, Wired, and Ziff Davis Smart Business. Before that, he worked in film and television, having earned a not particularly useful ... View Full Bio
We welcome your comments on this topic on our social media channels, or [contact us directly] with questions about the site.
Comment  |
Email This  |
Print  |
RSS
More Insights
Webcasts
Key technology trends in 2021 - Making these technologies work for your business
Detecting and Preventing Insider Data Leaks
More Webcasts
White Papers
Why Add Security to Your Skill Set and How to Do It
2021 SANS Cyber Threat Intelligence Survey
More White Papers
Reports
Enabling Enterprise Resiliency Through Cyberthreat Detection
Building an Effective Cybersecurity Incident Response Team
More Reports

That's a bold statement based on one company's trial usage, no?

>> In the latest repudiation of costly, complicated enterprise software,  RBS has agreed to deploy Facebook at Work to facilitate online communication among the bank's 100,000 employees.

Would like to know more about security, hosting, governance, and how that plays out in Scotland/UK; government regs as well.

What did they have before [email protected]?  Does it replace anything? What's the benefit for employees? the company?

What can we egenralize across a bigger user population of companies?
Reply  |  Post Message  |  Messages List  |  Start a Board

>> I feel that the world already has a Facebook for Work by the name of LinkedIn.

Intersting idea, but LinkedIn is so boring compared to Facebook. I mean, would you post all those silly pictures on Linked in? :-)

FB is more social, and I think that's what they are going for here.  Kind of a company grapevine
Reply  |  Post Message  |  Messages List  |  Start a Board

That is a great point. I wonder if the correlation is because, a cold climate creates the incentive to stay at home and interact with friends and family electronically.

Further is this complying with data protection act? As far as I know most of the banks do not give the freedom to use social media due to security constraints.
Reply  |  Post Message  |  Messages List  |  Start a Board

This is interesting. However is it a success? Hope it does not have any impact on the productivity and the quality of work.
Reply  |  Post Message  |  Messages List  |  Start a Board

Royal Bank of Scotland may not like traditional enterprise software, but it probably also knows that participation on Facebook seems to go up the further north you go, and the bank is pretty far north. The Scandanavian counties and Iceland, for example, have extremely high participation rates on Facebook.
Reply  |  Post Message  |  Messages List  |  Start a Board

I expected there would be a day when Facebook did this. And it has come.

I'm sure the monetization model here is going to be just like other enterprise software. There will be a licensing model. This will probably prove successful. It reminds me of when Google got into this business. Everyone thought it was a little strange at first, but it ended up making sense as Google has done well in enterprises.
Reply  |  Post Message  |  Messages List  |  Start a Board
Editors' Choice
Hot Topics