Microsoft will likely announce a preview of Windows Threshold on September 30. Here's what to expect.

Microsoft on Monday sent media invitations for a Sept. 30 event in San Francisco. The invitation reveals only that the company will share "what's next for Windows and the enterprise." Microsoft observers widely assume the company will announce a preview of the next version of the OS, codenamed Threshold.

Windows 8 left a bad taste for many PC users, millions of whom have stuck with Windows 7, and even Windows XP. Windows 8 also hasn't helped Microsoft challenge Apple in the tablet market. But it's often said that Microsoft only gets its OSes right with every other release -- such as when it followed up highly criticized Windows Vista with highly adopted Windows 7. Will the company bounce back with Windows Threshold? Here are nine things to expect.

1. Microsoft will bring back the Start menu, and Live Tiles will be optional.
Microsoft confirmed in April that a new Start menu is coming to its desktop UI. Reps have been tight-lipped since. Videos and screenshots from an allegedly leaked Threshold build recently surfaced and revealed more details. The new Start menu is expected to be highly customizable; users will be able to configure it as a slightly slimmed-down version of the one from Windows 7, or with a second column of user-selected Live Tiles. If desktop users don't want to see tiles or use Modern apps, they won't have to.

2. Modern apps will run in floating windows on the desktop.
Microsoft confirmed this feature in April as well. In Windows 8 and 8.1, Modern apps launch only into full-screen mode, but in Threshold, the apps will run more like legacy software; they'll not only launch into resizable windows that float on the desktop, but also include more mouse-friendly controls. Modern apps are likely to work differently on tablets, however (see item 4 in this list). 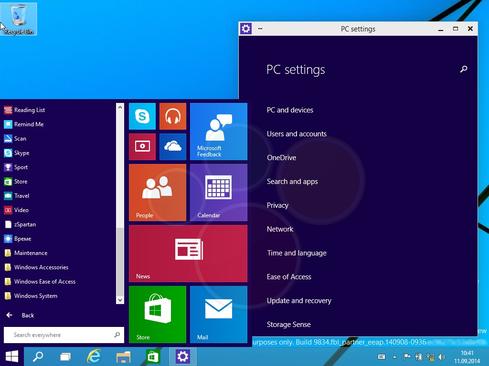 A screenshot from an allegedly leaked build of Windows Threshold.
(Source: WinFuture)

3. Threshold will bring some of Windows Phone's best features to the desktop.
Based on the aforementioned leaks as well as recent reports, Threshold will include several features from Windows Phone, including the Notification Center and WiFi Sense, the latter of which automates signing into frequently visited public WiFi networks. Most intriguingly, Microsoft might extend Cortana, Windows Phone's competitor to Apple's Siri, to Windows desktops and tablets. It's not clear whether the feature will be active in the upcoming preview.

That Microsoft's mobile and desktop services will further intertwine isn't surprising; Microsoft CEO Satya Nadella has been foreshadowing this sort of move for months. He's frequently said Windows services should move with users across devices. The company is trying to popularize this idea with not only cloud-based services, such as OneDrive, but also its Universal Apps, which let developers write apps that will run on all Windows devices, including

Now that we know the Windows 9/Threshold desktop UI can be configured to look much more like Windows 7 than Windows 8 or 8.1, are any readers feeling excited to upgrade?
Reply  |  Post Message  |  Messages List  |  Start a Board
Editors' Choice
Hot Topics