Though Microsoft remains officially mum, evidence continues to emerge that the company is readying a significant update for Windows 8.1, which is dubbed Update 1 in the online press.

Over the weekend, an ostensibly legitimate pre-release build of Update 1 began circulating through file sharing sites. It adds to a string of recent reports that indicate the update, which is expected as soon as March, is intended to make the OS more palatable to long-time PC users, many of whom were confounded by Win 8's Live Tile user interface. Many of the rumored tweaks could help mouse-and-keyboard users more comfortably handle touch-oriented Modern apps, even while in the desktop UI. This implies Microsoft remains committed to its tiled interface.

But Update 1 could also end up making Modern apps less visible to many users. Based on new leaks that emerged last week, Microsoft might soon enable the OS's boot-to-desktop mode by default.

In practical terms, such a move doesn't necessarily mean much to the individual user; just as users can now activate boot-to-desktop in just a few seconds, Update 1 should allow Live Tile fans to easily configure Windows 8.1 to keep starting up with the Modern Start screen.

Nonetheless, the rumored change would represent a substantial strategic shift for Microsoft. The company initially tried to force Windows 8 users to embrace the Modern UI, omitting a boot-to-desktop mode altogether. Stung by a harsh reception, Microsoft eased up a bit with Windows 8.1 by, among other things, implementing the option to bypass the Start screen. But if Update 1 actually relegates the Start screen to the background by default, the company will have retreated far more than anticipated from its initial stance.

Russian blogger WZor, a prolific leaker of Windows news and the source of many purported Update 1 screenshots, revealed the possible boot-to-desktop change. The website The Verge subsequently cited an unnamed source close to Microsoft who confirmed the company is experimenting with boot-to-desktop as the Windows standard. The build that leaked online includes features that support as much, but given that the build is not a complete product, it's difficult to draw definitive conclusions. 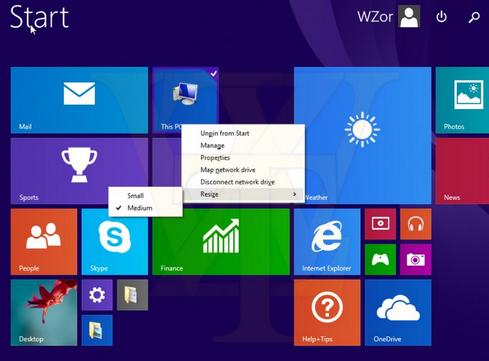 Microsoft reportedly hasn't made a final decision, and there are at least a few reasons to think boot-to-desktop might not be unilaterally applied.

Some Windows 8 users are longtime PC owners who upgraded their aging systems because Microsoft initially offered the new OS for free. The Live Tile UI has garnered modest momentum on touchscreen devices, but among those running the OS on less-than-current hardware, Win 8.1 simply doesn't offer very much. For this group, it makes sense to boot directly to the desktop.

But devices like Dell's 8-inch Venue 8 Pro tablet also run Windows 8.1, and it's hard to imagine anyone wants to spend the majority of his or her time using legacy software on such a small device. Given that Microsoft's mobility market share is derived mostly from Apple and Google's leftovers, boot-to-desktop tablets seem like a bad idea.

Regardless, to stimulate PC adoption, Update 1 will need more than boot-to-desktop tweaks. According to Web-tracking firm Net Applications, Windows 8.1 hasn't even managed to attract a majority of existing Windows 8 users. If desktop users haven't upgraded in large numbers in the months since boot-to-desktop became an option, they're not going to be much more likely to do so if boot-to-desktop is a default. Microsoft is making progress in refining its OS's initially clunky UI, but with many consumers and businesses keeping their PCs longer between upgrades, the company needs more than refinement to get customers to move off their current systems.

This remains true not only among increasingly tablet-hungry consumers, but also among Microsoft's core enterprise customers, most of which have settled on Windows 7.

Forrester analyst David Johnson told InformationWeek in January that Windows 8.1 remains a non-factor in the enterprise, outside of a few cases in which employees requested Windows tablets. Johnson said, however, that the vast majority of workplace tablet deployments involve iPads. Apple CEO Tim Cook recently touted as much, stating during the company's recent earnings call that iPads account for 90% of tablets activated in the enterprise.

What do these struggles imply? As a mobile platform, Windows 8.1 has appealed primarily to a niche audience -- and even then, that niche audience has only begun to expand as device prices have fallen. As a desktop platform, meanwhile, Microsoft's flagship continues to fall flat.

"It runs fine, but you don't get a lot of benefits," said IDC analyst Al Gillen in a phone interview. He said most enterprises don't rely on Modern applications, meaning that even as Windows 8.1's UI becomes more refined, happy Windows 7 customers still have little incentive to upgrade. The app ecosystem has to rapidly evolve alongside the UI, and Microsoft needs to find more use cases that demonstrate Windows 8.1's business value.

All of this leaves Microsoft in a potentially challenging position heading into BUILD, its conference for developers. Slated for April, BUILD already coincides with Windows XP's end-of-life deadline, which will put all eyes on Microsoft's product roadmap. If Update 1 arrives a few weeks before the opening keynote, the attention (and scrutiny) will only be magnified. Even though Microsoft has repeatedly demonstrated the power and diversity of its enterprises businesses, lingering questions about Windows could force company execs into a tricky balancing act: persuading developers that they should ramp up their investment in Modern UI apps while also conceding that the core Windows 8.1 strategy is still in flux.

The fact that Microsoft will likely have a new CEO by then only further complicates matters. And that's not even to mention expectations that Microsoft will use Build to debut preliminary plans for Windows 9, and to explain how they relate to Update 1. It's shaping up to be a busy few months in Redmond.

Michael Endler joined InformationWeek as an associate editor in 2012. He previously worked in talent representation in the entertainment industry, as a freelance copywriter and photojournalist, and as a teacher. Michael earned a BA in English from Stanford University in 2005 ... View Full Bio
We welcome your comments on this topic on our social media channels, or [contact us directly] with questions about the site.
Comment  |
Email This  |
Print  |
RSS
More Insights
Webcasts
The Experts Guide to Ransomware Response
Multi-Cloud Data Management for Modern Applications
More Webcasts
White Papers
Are We Cyber-Resilient? The Key Question Every Organization Must Answer
Top 5 Tips for Enterprises Choosing a Firewall
More White Papers
Reports
The InformationWeek 2021 State of ITOps and SecOps Report
The Need for Speed: Second Generation EDR
More Reports