Windows 8.1: On The Rise? - InformationWeek

How's this for some Halloween witchcraft? After months of being shunned by buyers, according to web-tracking firm Net Applications, last month Windows 8.1 somehow conjured its largest market-share gains to date, snaring more ground in four weeks than it had during the rest of the year combined.

Back-to-school sales and other short-term factors played an obvious role in the uptick, so it remains to be seen whether Microsoft's October progress was merely a blip or the start of a sustained upward trend. Still, the news continues a good month for some of Microsoft's historically troubled products. After losing over $1 billion to date, the Surface line finally flirted with profitability last quarter, propelled by the well-received Surface Pro 3.

Windows 8 and 8.1 combined for 16.8% of active PC users, a metric Net Applications derives by monitoring web traffic to the hundreds of thousands of sites in its network. That's up massively from 12.26% in September and only 9.25% in October 2013.

Despite the progress, Microsoft's newest OSs are still far, far behind the market leader, Windows 7. The OS most chosen by businesses that upgraded this year from Windows XP, Win 7 claimed a little over 53% of users, a slight increase relative to last month. Windows 7 held 46.42% of the market in October of last year.

[Despite its popularity, are we seeing the beginning of the end for Windows 7? Read Windows 7's Halloween Deadline: 5 Key Issues.]

Windows 8 and 8.1 also trailed Windows XP, though not by much. Microsoft stopped supporting the aging OS earlier this year, but as of September almost a quarter of PC users were still using it. Last month the floor finally fell out, with Windows XP share dropping to 17.18%. That's down all the way from 31.24% at the same point in 2013. 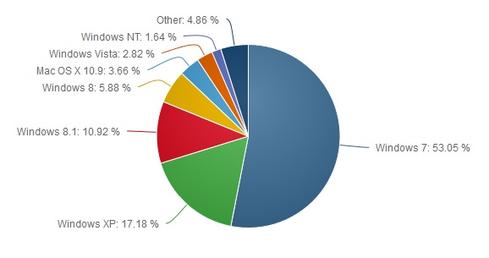 In October, Windows 7 was still by far the most used OS.
(Source: Net Applications)

Apple's most popular OS continued to be OS X 10.9, more commonly known as Mavericks. Its share dropped from 4.05% to 3.66% as some Mac users began migrating to OS X Yosemite, released last month. Last quarter, Apple posted its best-ever Mac sales, an impressive feat given that the overall PC market remains somewhat depressed. Nevertheless, Windows continues to lead the PC OS race. Over 91% of PC users ran some version of Windows in October, compared to around 7% who ran some variant of OS X.

Statistics like those that Net Applications produces are intrinsically prone to sampling limitations and other error-inducing variables, so all of the aforementioned figures should be considered approximate. The most recent Net Applications data also includes some unusual findings, such as a strangely large jump in the "Other OS" category, which might indicate October's sample was somehow irregular. But other web tracking services have observed trends that broadly align with Net Applications' findings. StatCounter (which, like Net Applications, tracks user activity rather than individual users) also found that Windows 8 and 8.1 have risen while XP has fallen off. Relative to the Net Applications numbers, StatCounter's figures indicate these trends are unfolding more slowly, however. StatCounter also assigns a much greater share to OS X, which suggests Mac owners use their computers more than many PC users do.

However much credence one gives to one set of market-share data or another, it's evident that Windows 8.1 sales have accelerated in recent months. Given the OS's ignominious sales history, that's a good thing for Microsoft -- but as mentioned, the upswing might trail off quickly.

Windows 8.1's breakout was in some ways inevitable. On October 31, Microsoft closed down sales of both most Windows 7 PC and retail licenses of Windows 8, meaning that for consumers, Microsoft will be pushing only Windows 8.1 devices until Windows 10 hits the market next year. But even before the Halloween deadline, retailers had replaced old inventory with newer models -- such as the fleet of budget-friendly Windows 8.1 devices released over the late summer and fall.

Some users with dying XP machines might simply buy iPads as replacements, but most people still require traditional PCs at least some of the time. When these people show up at the store or browse online, they find Windows 8.1 models more easily than they'll find Win 8 or Win 7 ones. Unless all PC shoppers switch to Macs or go Linux, Microsoft should continue to accrue this sort of inevitable momentum until Windows 10 arrives. Windows 10 itself has been relatively well received, which might drive a sustained, if difficult-to-pinpoint, increase in Windows 8.1 drives.

But general PC demand was only one aspect in Windows 8.1's strong October. As mentioned, back-to-school sales were surely a factor as well. It's also likely many Windows XP users finally got around to upgrading. Both of these are relatively short-term stimulants that won't necessarily help Windows 8.1 to maintain momentum. It's quite possible Windows 8.1 will continue to make gains throughout the holidays, for example, but with new iPads and the Nexus 9 on the market, will Win 8.1's progress start to drop off?

Let us know what you think in the comments.

Michael Endler joined InformationWeek as an associate editor in 2012. He previously worked in talent representation in the entertainment industry, as a freelance copywriter and photojournalist, and as a teacher. Michael earned a BA in English from Stanford University in 2005 ... View Full Bio
We welcome your comments on this topic on our social media channels, or [contact us directly] with questions about the site.
Comment  |
Email This  |
Print  |
RSS
More Insights
Webcasts
How to Effectively Analyze Security Data
Virtual Event: The State of Cloud Security
More Webcasts
White Papers
eSentire Annual Threat Intelligence Report: 2019 Perspectives and 2020 Predictions
Securing Real-Time Communications for Dummies Book
More White Papers
Reports
eSentire Annual Threat Intelligence Report: 2019 Perspectives and 2020 Predictions
Cyber AI: An Immune System for Email
More Reports

it's not 91% market share for windows, but 91% browser use with all versions of windows connected with the internet.

So it is clear, that the number is much bigger for windows if you sum all computers sold since 2001 (Windows XP) - in times Apple sold less Macs than today.

It all depends on hardware support especially for peripherals. One of the biggest problems with Win8 is that it does not support mildly older hardware that was released before Win8 came out. I have plenty of current and fully functional gear that won't work under Win8 because Microsoft again decided to change the driver model for no apparent reason.

What might make Win10 a winner is a virtual driver module that allows for using XP/Win7 drivers as is. That would keep a lot of fully functioning accessories out of landfills.
Reply  |  Post Message  |  Messages List  |  Start a Board

likely the forced upgrades (yaknow, the upgrade they did after asking you 'would you like to upgrade' and you answer no, so they do it anyhow) are likely the reason for this jump. Sadly, 8.1 has several nasty bugs, the flipping between desktop and tile being the best (the machine is unusable). Fortunatley, if you call Microsoft or, say, HP, no one will help you. Best yet, there are six KNOWN causes for this bug listed...plus, 8.1 isn't compatible with say sql server 2013....which will cause all kinds of problems since it upgrades you without checking.
Reply  |  Post Message  |  Messages List  |  Start a Board

Be sure to try out some of the other free "Office" suites such as LibreOffice, OpenOffice, and others offering a good 90% of what you get with Microsoft Office, and reasonable compatibility.
Reply  |  Post Message  |  Messages List  |  Start a Board

I read your post to mean the devices you SEE in movies, not the devices you use to watch them...In that it is pretty simple....Apple pays lots of $$$ for product placement and also due to their still relatively good "cool factor", many directors or producers want to feature them in their movies instead of the lowly Windows based machines that the great unwashed (meaning real people) use.
Reply  |  Post Message  |  Messages List  |  Start a Board

Well, thank God that here (finally) at 8.1 UPDATE it isn't too bad for NORMAL people to use in that it boots directly to the desktop and acts a whole lot like Windows 7.  Even so, I bet many will jump on an upgrade to Windows 10 next year. With the back to school rush and the holidays coming up, anyone buying a Windows machine will pretty much HAVE to buy Win 8.1,  so it isn't like there is much choice out there, unless you want to cough up $1200 (minimum) for a Mac.
Reply  |  Post Message  |  Messages List  |  Start a Board

I wouldn't worry too much about rapid obsolescence due to Windows 10; virtually anything with an x86 chip that runs Windows 8.1 will be able to run Windows 10. How well Win 10 will run on some devices might be a bit of a wild card; given that these cheap devices have "good enough" components, they're destined to become obsolete more quickly. But top-tier machines should transition to Win 10 just fine, I'd imagine.
Reply  |  Post Message  |  Messages List  |  Start a Board

I think the adoption numbers look better thanks to the sheer volume of inexpensive Win 8.1 tablets hitting the market of late. The 800 lb gorilla in the room is the looming release of Windows 10. Will this have any impact on cheap tablet sales? The holiday sales figures should be good but there could be a lot of unhappy consumers if their new device becomes obsolete when Win10 drops. Holiday consumers may not care with a sub-$200 device but top-tier device makers should probably address this now. I personally detest throwing money away on dead-end devices, even if it's only $100.
Reply  |  Post Message  |  Messages List  |  Start a Board

Perhaps because folks watch movies and television programs for entertainment.  Folks want to escape and see something different than reality.  Even so called "reality" shows aren't reality.

In real life what I've noticed is a lot of folks walking around with iPads.  A not-insignificant subset of that group also enjoy a keyboard add-on that doubles as a landscape-mode kick stand.
Reply  |  Post Message  |  Messages List  |  Start a Board

With the availability of Windows 7 machines fading away, consumers will have no choice. As has been stated, desktops and laptops, while no longer the only game in town, are still an absolutely essental part of the computing landscape. When there's nothing to eat but spinach, everyone will eat spinach - or starve.

One thing this will do is to push me, personally, away from Microsoft Office. My ancient, though perfectly adequate version, I'm told, won't play on 8.1. While I'll be stuck paying for an unnecessarily powerful and expensive 8.1 machine, I'll be under no such compulsion to lay out big bucks for the next version of Office. Hello Google, goodbye Office.