After celebrating the Windows 10 launch last week, Redmond kept up its momentum with news updates from across the company. This included updates to the new OS, as well as expanding Outlook to the Apple Watch.

On Monday, Aug. 3, the tech giant confirmed its purchase of Incent Games Inc., the parent company behind sales gamification platform FantasySalesTeam. Its acquisition is intended to bring team-based collaboration and competition to Microsoft's Dynamics CRM offerings. Officials also noted plans to apply the platform in other areas of the business.

FantasySalesTeam has proven more effective than other incentive programs, which often cause team members to disengage when the same employees always rise to the top. Sales organizations can use the software to create "teams" and facilitate competition by awarding prizes when certain metrics are achieved.

We also got a more detailed update on HoloLens, which Microsoft CEO Satya Nadella addressed during a recent BBC interview. Windows 10 will support the augmented reality headset, which arrived as a surprise to the tech community back in January.

[Beyond Windows 10: What's next for Microsoft?]

HoloLens is not a VR device. Rather than putting its wearers into different worlds, it enables them to interact with holograms placed within the real world as they normally see it. Nadella claims developers and enterprise users, the first HoloLens target audience, will get their hands on an early version "within the next year." Consumers are not yet on the agenda.

Xbox One is another Microsoft product joining the Windows 10 lineup. Gamers will receive a free upgrade to Windows 10 for Xbox in November following a preview period of about two months, as announced at Germany-based video game conference Gamescom.

The update will integrate Xbox Live and Xbox experience features into the Windows 10 ecosystem. These include a revamped homepage, a Cortana gaming assistant, an updated guide, a new community section, and redesigned Xbox Avatars.

Of course, we can't have a week of Windows 10 updates without talking about the PC. If you are running the new OS, you received a cumulative batch of updates intended to improve functionality within Windows 10.

Upgrade batch KB3081424, located in Update & Security under Settings, has also been called "Service Release 1" among Microsoft watchers. The non-security update contains a bundle of fixes that have been created and released since the Windows 10 launch, so your PC may already have some of them if you recently upgraded.

We also got an Office update this week, when Microsoft Sway exited its 10-month preview period. The digital storytelling app is now generally available on the Windows Store and Office 365. 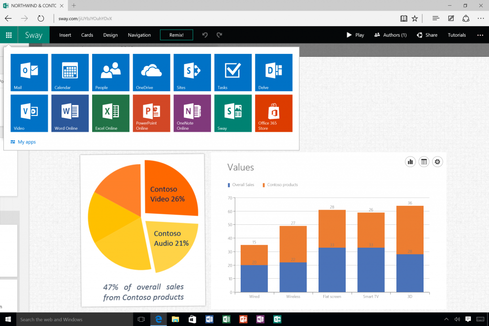 Sway was created as a platform to help businesses, consumers and schools create and share online content (projects, presentations, and reports) using text, images, and video. You don't need to be a design pro to use Sway, which is designed to make content visually appealing.

Microsoft coupled the full release of Sway with a full launch of redesigned Docs.com. The hub serves as a common location for Sway users to share their content with friends, family, and the general public. It lets customers create user profiles, access site metrics, and receive comments on their work.

Wearables were also in the spotlight this week, though Microsoft Band was not. Redmond released a new batch of productivity apps for Apple Watch and Android Wear. The action is another sign of Nadella's commitment to broadening Microsoft's user base.

Kelly Sheridan is the Staff Editor at Dark Reading, where she focuses on cybersecurity news and analysis. She is a business technology journalist who previously reported for InformationWeek, where she covered Microsoft, and Insurance & Technology, where she covered financial ... View Full Bio
We welcome your comments on this topic on our social media channels, or [contact us directly] with questions about the site.
Comment  |
Email This  |
Print  |
RSS
More Insights
Webcasts
Hybrid Cloud: The Great Balancing Act
Optimizing App Performance in the Cloud
More Webcasts
White Papers
Sunburst: Impact and Timeline
4 Steps to Achieving Comprehensive Kubernetes Security
More White Papers
Reports
The State of Threat Detection and Response
How Data Breaches Affect the Enterprise (2020)
More Reports

Although I am not sure exactly, I am afraid you may need to go to Windows 7 first except MS provides direct upgrade path to Windows 10. Another factor to consider is the hardware capability - is your old PC able to host Windows 10 and run it smoothly?
Reply  |  Post Message  |  Messages List  |  Start a Board