Windows 10 Enterprise has been downloaded on 1.5 million devices. That indicates a strong trend of adoption among business users.

Microsoft has stated that Windows 10 Enterprise is running on 1.5 million enterprise PCs.

The statistic is the latest in a series of milestones since the public launch of Windows 10 on July 29. At one month of general availability, the OS had been downloaded on 75 million PCs and had claimed 5% of the PC market.

Let's put that number in perspective: Windows 8 garnered 40 million sales during its first month of availability and took about six months to reach the current popularity of Windows 10. Windows 7 sold a little over 60 million units in its first ten weeks.

The numbers have been encouraging and point to the success of myriad changes Microsoft made in developing and launching its new OS. Windows 10 was developed with the help of users. It is free to download on devices running Windows 7, Windows 8, and Windows 8.1.

While 1.5 million is a small fraction of the total number of PC upgrades, it is no less significant. Compared with everyday consumers, enterprise customers generally wait before deploying major OS upgrades because of the time and effort required for such projects and the risk associated with new system adoption.

In an effort to generate interest among corporations, Microsoft has enhanced the business edition of Windows 10 with features that boost security and simplify management for IT administrators. Passport, Device Guard, Windows Hello, and Enterprise Data Protection were built to better protect business devices and the identities of employees who use them.

Windows 10 is "the best enterprise edition of Windows we've ever delivered," said Alkove. It seems business are starting to take note, with major customers, including Bank of America, already looking towards companywide upgrades. 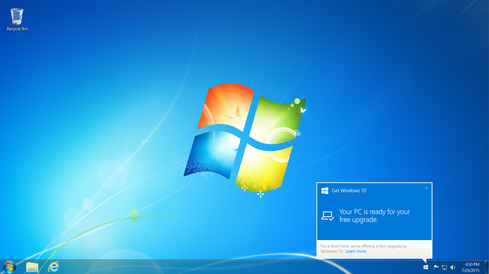 Alkove also briefly discussed Microsoft's plans for Windows Update for Business -- the servicing model that will deliver OS features and security updates to enterprise devices. With this model, Microsoft is taking the responsibility for distributing updates, but will continue to give customers the same control they currently have.

One of the key problems for Windows 10 Enterprise customers is a lack of insight on the contents of each patch. Microsoft's initial intention was to withhold the details of each update, which proved a major point of contention with security-conscious organizations.

After hearing feedback from business users, the company has decided it will be more upfront in sharing the details of Windows 10 updates. Officials are currently in the process of deciding the best way to convey this information to businesses, said Alkove.

Enterprise members of the Windows Insider program will see a working version of Windows Update for Business in the near future, he continued. A full version will be made generally available later this year.

Kelly Sheridan is the Staff Editor at Dark Reading, where she focuses on cybersecurity news and analysis. She is a business technology journalist who previously reported for InformationWeek, where she covered Microsoft, and Insurance & Technology, where she covered financial ... View Full Bio
We welcome your comments on this topic on our social media channels, or [contact us directly] with questions about the site.
Comment  |
Email This  |
Print  |
RSS
More Insights
Webcasts
How Elite Analyst Teams are Transforming Security with Cyber Reconnaissance
ROI and Beyond for the Cloud
More Webcasts
White Papers
A Technical Deep Dive on Software Exploits
Five Reasons to Protect your VPN with Multi-Factor Authentication
More White Papers
Reports
IDC FutureScape: Worldwide Digital Transformation Predictions
Building an Effective Cybersecurity Incident Response Team
More Reports

I think "Free" is the keyword here. I do not recall the same being true when Windows 7 and 8 were first released. I have a strong feeling that many people downloaded Windows 10 because it was a free download and the hype had been mostly positive. I know that was the reason I decided to move from Windows 7 to 10.

After working with it for a month now, I have regrets. When I moved from XP to Windows 7, I thought, "Wow! This is definitely an improvement. I didn't feel that way after installing Windows 10. I think this version should just have been called Windows 8.2. I find the look of the interface to be bland and many of the customizable settings have been removed (or at least buried.) I cannot stand the auto-update feature... an update automatically rebooted my system while I was restoring content from a backup.

I share the same opinion with you. I downloaded Windows 10 on one of my laptops but did not find it very powerful/worth of the upgrade effort. Personally I chose to stay on Windows 7 for the rest of my PCs at this moment...
Reply  |  Post Message  |  Messages List  |  Start a Board

In terms of personal use, I have windows 7; I have never had any major problems.  I'm concern that if I upgrade to other version some of my older problem won't be able to work as before.  what would be the advantage for consumers for getting Windows 10, may be for  business yes.
Reply  |  Post Message  |  Messages List  |  Start a Board

"After hearing feedback from business users, the company has decided it will be more upfront in sharing the details of Windows 10 updates. Officials are currently in the process of deciding the best way to convey this information to businesses, said Alkove."

Simple answer that doesn't require a great deal of thinking or six months of meetings: Go back to what was done correctly with previous client and server operating systems (Windows XP/7 and Windows 2003/2008 Servers).

@OlePerfesser, interesting point, I would say it depends on the Co. and if things got done properly:) how I see it ...
Reply  |  Post Message  |  Messages List  |  Start a Board

Many may have downloaded Win 10, but never installed it. Drawing conclusions based on the number of downloads needs to be done carefully. All it shows that there is some interest and that there was nothing lost by downloading....and that's about all this bit of information can tell us.
Reply  |  Post Message  |  Messages List  |  Start a Board
Editors' Choice
Hot Topics