Microsoft this week released the full suite of Office for Android, updated the Surface Pro 3, and confused the Internet with its Windows 10 pricing strategy.

With the launch date for Windows 10 growing closer each day, it was fitting for Microsoft to start its week with news surrounding the new OS. This time, the update affected Windows Insiders and their eligibility to receive Windows 10 for free.

In a blog post dated June 19, Microsoft originally explained the way that Microsoft Account holders running the Insider preview would be able to receive the final build of Windows 10 and remain activated on the new OS.

Windows Insiders could infer from the post that they could get Windows 10 for free, even if they didn't have a licensed version of Windows 7 or Windows 8.1. This news, which could have been perceived as a gift to those who have tested the system and provided feedback, seemed too good to be true. It was.

Microsoft soon revised its post to delete all mention of the word "activated." Officials also emphasized the requirement of running genuine Windows 7 or Windows 8.1 in order to get Windows 10 for free. Their muddled messaging ultimately led to mass confusion among the tech community.

This week, we finally got some clarification. Microsoft updated its blog once more to explain how Windows Insiders who stay with the program can continue to receive preview builds for new OS features, regardless of the version of Windows they were running. However, this will always be prerelease software.

If you're a Windows Insider running Windows 7 or Windows 8.1 and qualify for the free upgrade, you have the option of exiting the Insider program and upgrading to the full version of Windows 10 as it is released on launch day.

July 29 marks the release of Windows 10, but it also signifies the launch of Sway for Windows 10. Microsoft also announced the availability of Sway for iPad in preview mode.

In other Windows 10 news, we learned this week that Microsoft will turn its focus to Windows 10 Mobile in July. Microsoft Devices communications director Greg Sullivan reported to PCWorld that the desktop version is currently absorbing most resources, but "a lot more attention" will go towards Windows 10 Mobile starting in early to mid-July. The launch date for the mobile OS is still unclear.

We've gotten a sneak peek of devices Microsoft is building to accommodate Windows 10, but it looks like existing devices are also getting an upgrade. The Surface Pro 3, Surface 3, and Microsoft Band are receiving updated software, as cited in a Neowin report.

The end of support for Windows Server 2003, which was running on 12 million servers as of one year ago, is looming closer. If your business is one of many affected enterprises, we created a guide explaining the changes this will cause and potential migration paths you can take. 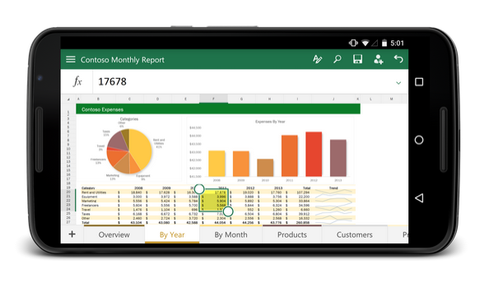 Android devices got a Microsoft upgrade this week when the Office suite launched in full on Android smartphones. This news marks the end of a five-week preview period and comes a few months after Microsoft released Office for Android tablets back in January.

In security news, we recently learned Samsung was caught disabling automatic security updates for its Windows PCs. The company claims this isn't as bad as it sounds, but many are skeptical.

Among the many changes at Microsoft is a new mission statement, written in a companywide email to employees and published on GeekWire. The official statement: To "empower every person and every organization on the planet to achieve more." If that sounds familiar, it's because Nadella said those exact words during his keynote at the 2015 Ignite conference.

So maybe the new mission statement isn't breaking news, but there's no doubt Nadella is proving effective in leading Microsoft through a period of transformational change. He recently earned the top spot among highest-earning new CEOs, according to a Wall Street Journal study. With 2014 earnings of $84.3 million, Nadella is the second-highest paid CEO overall.

Kelly Sheridan is the Staff Editor at Dark Reading, where she focuses on cybersecurity news and analysis. She is a business technology journalist who previously reported for InformationWeek, where she covered Microsoft, and Insurance & Technology, where she covered financial ... View Full Bio
We welcome your comments on this topic on our social media channels, or [contact us directly] with questions about the site.
Comment  |
Email This  |
Print  |
RSS
More Insights
Webcasts
People Are The Most Important Part of Autonomous SOC
Nip Ransomware in the FUD: Detecting Attacks Pre-Encryption
More Webcasts
White Papers
Osterman Research: Cyber Crisis Response - Fit For Today's Threat Landscape?
Aligning Cyber Skills to the MITRE ATT&CK Framework
More White Papers
Reports
The Infoblox Q4 2020 Cyberthreat Intelligence Report
Enabling Enterprise Resiliency Through Cyberthreat Detection
More Reports

"MS is going to have seven versions of 10 available and I don't see those coming to us for free."

@Technocrati: I think they may be free to try for a month or so and then you'd have to register and activate to be able to continue using them. That's the approach they tried with Windows 7 and Windows 8.
Reply  |  Post Message  |  Messages List  |  Start a Board

" You don't have it embedded in your task bar yet ?   When was the last time you updated and rebooted ?  "

@Technocrati: Fortunately I don't as yet even after rebooting. I am using an enterprise version of Windows 8.1 so may be they probably won't be making this change for enterprise users.
Reply  |  Post Message  |  Messages List  |  Start a Board

MS can't even give away Win10 for FREE, nevermind shaking down the faithful to keep its buggy OS afloat.
Reply  |  Post Message  |  Messages List  |  Start a Board

@tzubair  I believe you are correct.   As Kelly mentions in her other piece on Windows 10 Upgrades FAQ .

MS is going to have seven versions of 10 available and I don't see those coming to us for free.
Reply  |  Post Message  |  Messages List  |  Start a Board

@tzubair     I don't see one.  But I think now that we are complaining MS will address the issue.  You don't have it embedded in your task bar yet ?   When was the last time you updated and rebooted ?

In any case, it should be there any day now - they have even hit my Windows 7 machine.  I do not appreciate the invasion.

"Why is Microsoft misleading the media and its users about the "free" installation of this software when it knows full well that there are limitations to its use? "

@Mintas: I think that's just a marketing gimmick whereby they allure the users into trying out something and then try to make them pay. MS has been doing that with all versions of Windows lately. If you ask someone to pay upfront before trying it out, it's going to fail massively. No one would have any reason to dish out the dollars and purchase the new version.
Reply  |  Post Message  |  Messages List  |  Start a Board

@Technocrati: Is there no option to remove the button and tell it that you don't to upgrade? If there's no option now then MS might build up a patch for it and roll it out. Fortunately, I haven't received the button yet so I don't know what you guys are talking about.
Reply  |  Post Message  |  Messages List  |  Start a Board


@[email protected]    I can relate to your frustration as well - I started a board weeks ago regarding this very issue - which I guess was buried by indifference.  Maybe we should start charging MS for these annoyances ?


Since we don't own the OS, we do own the hardware.   Good Luck removing that icon - probably need to deep dive into the registry.

Probably will be as easy to remove as any other virus.


".....my computer doesn't qualify because of the incompatibility of my NVIDIA graphics card with Windows 10. It's hard to believe that one of the best, relatively new cards on the market would be excluded from Microsoft's new operating system."

@MintasL375   I can relate to your frustration, this issue of drivers has been the most consistent part of MS since their beginning.


You would think NVIDIA would be one of the first cards they wrote drivers for .....Nope.   I am sorry you are going through this because this concept of "free" by MS is just a new as this OS offering.

I am irritated seeing the Windows icon in the task bar, may be because I am not used to it. Although  I have applied for the upgrade but still this icon sticks there on the task bar and has no options of close or remove.
Reply  |  Post Message  |  Messages List  |  Start a Board
Page 1 / 2   >   >>
Editors' Choice
Hot Topics