With Windows 10 looming, Redmond decided to get its partners and developers pumped up this week. Monday, July 13 marked the kickoff keynotes for Microsoft's Worldwide Partner Conference (WPC), held this year in Orlando, Fla.

WPC 2015 set the stage for a series of announcements pertaining to Microsoft's core offerings and corporate strategy. Outside the conference, officials continued to roll out Office and Windows 10 updates.

During the first wave of WPC keynotes, we learned about new products and services like the Cortana Analytics Suite, Project Gigjam, and a premium Office 365 Enterprise Suite called E5.

Project Gigjam aims to involve people more easily in a task that goes outside typical business processes. Employees can use GigJam to summon the information they need, circle assignments, and tap on people who need to be included. Each person will get the data and tools they need to complete the task at hand.

Microsoft officials gave a second round of keynotes later in the week to further elaborate on how its strategy will affect partners and customers during its 2016 fiscal year. Data security, digital disruption, and cloud technology were core to the morning speeches.

COO Kevin Turner also shared some insight on how Microsoft plans to align its priorities for the coming year. He listed the four core focus areas as a stronger commitment to cloud, succeeding with Windows 10, staying competitive in a tough market, and working toward better customer service.

Outside WPC, Microsoft was informing the world of its Windows 10 marketing plans. The July 29 launch will include a massive advertising and online marketing campaign for its "newest generation of Windows fans." The campaign is a year-long initiative marked with celebrations across the globe -- and in select Microsoft stores. 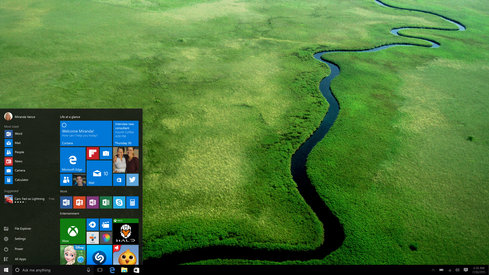 Windows Insiders in both the Fast and Slow rings welcomed PC Build 10240, which sources have reported is the RTM build of Windows 10. Build 10240 is missing the desktop watermark, and it brings a few performance gains for the Microsoft Edge browser.

Microsoft also delivered updates to Office for Windows 10. The "preview" tags for Office, Word, PowerPoint, and Excel were deleted in favor of a "mobile" tag to distinguish them from the Office desktop suite. The Office apps have also gotten some minor tweaks to run smoothly along with the rest of Windows 10.

Microsoft and FieldOne had previous crossed paths in March of this year, when the latter was the only field service management company invited to join Microsoft's Strategic Global Independent Software Vendor (ISV) partner program.

Kelly Sheridan is the Staff Editor at Dark Reading, where she focuses on cybersecurity news and analysis. She is a business technology journalist who previously reported for InformationWeek, where she covered Microsoft, and Insurance & Technology, where she covered financial ... View Full Bio
We welcome your comments on this topic on our social media channels, or [contact us directly] with questions about the site.
Comment  |
Email This  |
Print  |
RSS
More Insights
Webcasts
Fact or Fiction? The Truth About Cloud Native Security
Leveraging Infrastructure as Code to Streamline Security & Operations
More Webcasts
White Papers
How to Build Your Incident Response Plan
GRC Buyer's Guide - 5 Steps to Success
More White Papers
Reports
Privileged Access Management Checklist
CVE Weaponization Report
More Reports