Microsoft was generous with news updates during day one of its annual Build conference, held this week in San Francisco, Calif. Announcements primarily focused on Windows 10, but also showcased Azure and HoloLens.

Windows 10 will roll out later this summer, in 111 languages across 190 countries, to an eager customer base that might exceed your expectations.

On day one of Build, Microsoft shared its goal of bringing Windows 10 to one billion devices within two to three years of its launch. It plans to accomplish this with the promise of free upgrades, simple transitions, and a range of new devices.

Microsoft execs took the opportunity at Build to share more information on the new features coming to customers when Windows 10 launches in full. We’re looking forward to testing out the full version, especially in light of the most recent updates. Read on to learn more about what's coming in Windows 10, Azure, and HoloLens later this year:

Microsoft's new minimalist browser, formerly codenamed Project Spartan, has received a permanent title of Microsoft Edge. While some (like me) might prefer the old moniker, Microsoft vice president Joe Belfiore noted that there is a meaning behind Edge, which will debut in Windows 10:

"The name refers to the idea of being on the edge of consuming and creating," said Belfiore in his Build keynote, reported Gizmodo. "It refers to the developer notion of being closer to the modern capabilities of the Web."

The new browser recently made its debut in a preview of Windows 10 for desktops. Windows Insiders had the opportunity to test new features, which include Web note and an improved reading mode.

A new Windows 10 Insider preview (a new name change from "technical preview") is downloadable for Windows Insiders in the Fast and Slow rings. Now you can launch desktop apps from the Start menu again, download music in the Xbox Music and Music Preview apps, and continue listening to audio after a window playing sound has been minimized. One new feature, Windows Spotlight, regularly updates the lock screen with personalized info and enhanced wallpaper pictures.

Various UX improvements include animated Start menu tiles, a simplified Taskbar for Continuum -- changed to multi-tasking features like Snap Assist, and new default Windows sounds. It also made both visual and technical changes to Cortana, which will now attempt to answer your questions while they're being typed. Additional updates include changes to the Music and Video preview apps, Windows Store Beta improvements, and new discovery capabilities across Windows 10.

Developers will be able to port iOS and Android apps to Windows Universal apps, which the company will enable through two new SDKs, Microsoft reported. Android developers will be able to use Java and C++ on Windows 10; iOS developers can use their Objective C code. The idea is to enable developers to bring their creations to Windows 10 without fully rebuilding them. This announcement not only reflects Microsoft's efforts to support rival platforms, but should prove a major boost for Windows 10 in the eyes of consumers and developers.

CEO Satya Nadella demonstrated how the universal apps in Windows 10 will function for PC users. Even after an app is closed, users can continue to receive notifications for the app on all devices running the OS.

We also learned more about Continuum on mobile devices, which will be able to function as full computers if running Windows 10. Mobile customers can use an HDMI cord to connect and view their phones on larger screens. 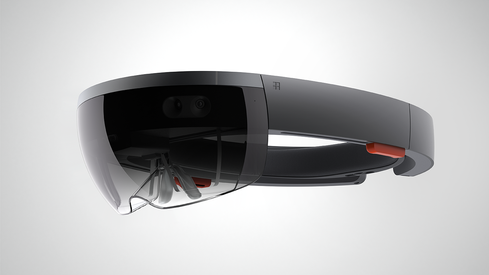 HoloLens: Mood Ring Of The Future?

There wasn't much in the way of HoloLens news, but Microsoft did demonstrate how HoloLens can be compatible with browsers. Users wearing the VR headset can manipulate app screens on Windows 10 and use their voices to make browsers follow them. It also showed how HoloLens lends itself to education by having a medical student use it to study anatomy.

In the future, though, HoloLens may know you better than you do. Microsoft recently obtained a patent for glasses that gauge the wearer's emotional response to something they see. VentureBeat first reported on the patent for futuristic headgear, technically called a "wearable emotion detection and feedback system." The glasses evaluate emotion by comparing sensory input with a range of gestures, posture, and speech inherent to humans and primates.

Conference attendees saw the debut of Visual Studio Code, a code editor designed for Mac and Linux. It can be used alongside the .NET Core software, which also premiered on day one of Build. .NET Core is open source implementation software that allows developers to build cloud apps across platforms. It's now available in preview for Linux and Mac operating systems.

With Data Lake, Microsoft is enabling developers to save their data without fretting over capacity restrictions for individual files. Its goal is to run Hadoop and advanced analytics on all data in order to draw conclusions. The Azure Data Lake is enterprise ready and can be used on existing data platforms.

Kelly Sheridan is the Staff Editor at Dark Reading, where she focuses on cybersecurity news and analysis. She is a business technology journalist who previously reported for InformationWeek, where she covered Microsoft, and Insurance & Technology, where she covered financial ... View Full Bio
We welcome your comments on this topic on our social media channels, or [contact us directly] with questions about the site.
Comment  |
Email This  |
Print  |
RSS
More Insights
Webcasts
What We Can Learn from Sports Analytics
Building the SOC of the Future: Next-Generation Security Operations
More Webcasts
White Papers
Improving Your Enterprise's Protection With Cyber Resilience
Eliminate East-West Traffic Hair-Pinning
More White Papers
Reports
Email Security Threat Report 2020
The Drive for Shift-Left Performance Testing
More Reports

I am more  than happy to see how the trend will go - how much churn Windows 10 will create for iOS and Android?
Reply  |  Post Message  |  Messages List  |  Start a Board

We will soon see a market place for windows apps. Even better when you could use your favorite android and apple apps on your device.

I don't think it could get any better than that. I mean, for Windows phone users.
I might even switch!
Reply  |  Post Message  |  Messages List  |  Start a Board

> I love to see how Apple and other manufacturers using android react to this. This could hit their
> market very soon.

@Shakeeb: Not really. Till the time Windows mobile users surpass Andoird users (not anytime soon) developers will write first for Andoird than port for Windows. And some wont. So Android users will be the first to get the new apps.
Reply  |  Post Message  |  Messages List  |  Start a Board

I love to see how Apple and other manufacturers using android react to this. This could hit their market very soon.
Reply  |  Post Message  |  Messages List  |  Start a Board

@nasimson – We will soon see a market place for windows apps. Even better when you could use your favorite android and apple apps on your device.
Reply  |  Post Message  |  Messages List  |  Start a Board

@[email protected] I feel Microsoft is try to bring in cross platform apps to Wi0ndows. Thereby reducing the opportunity cost from moving to a Windows powered device.
Reply  |  Post Message  |  Messages List  |  Start a Board

One of the best developments from Microsoft is the HoloLens. Soon we will see all our devices from one platform.
Reply  |  Post Message  |  Messages List  |  Start a Board

I can see some signs of transformation in these launches.

The ability for developers to port their apps from iOS & Android to Windows 10 as opposed to rebuilding from  scratch would attract many developers to quickly port their apps. It will get the much needed traction for Windows App Store.
Reply  |  Post Message  |  Messages List  |  Start a Board