This week brought us the public launch of Windows 10, global Microsoft celebrations, updated Office for Windows apps, and news on Windows 10 mobile.

Windows 10 finally arrived this week amid celebrations, praise, criticism, and enough articles to fill your new Microsoft Edge Reading List to the breaking point. By week's end, Redmond was bragging of 14 million installs.

The tech community has been watching the development of Windows 10 since it was first announced in January. Some of us have tested it as part of the Windows Insider team, others have decided to read about Insider findings rather than brave the many bugs and glitches of each preview build.

Wednesday, July 29 marked the start of Microsoft's public Windows 10 launch. Insiders were first to receive the OS so they could perform one last test and ensure compatibility before the general public rollouts.

Microsoft's consumer audience didn't have to wait long before their upgrade notifications started to arrive, and it proved an eager crowd. By EOD on July 30, more than 14 million devices were running Windows 10. There are still many, many people who haven't received the go-ahead to download, so don't fret if you're still using Windows 7 or Windows 8.

To celebrate the Windows 10 launch, InformationWeek took a trip to New York City's Microsoft specialty store for a glimpse at the public response. Surprisingly, Microsoft does not yet have a full retail shop in NYC but plans to open a flagship store on 5th Ave. This should happen later this fall, ZDNet's Mary Jo Foley reports.

At the Shops at Columbus Circle, we took a break from the Surface and tested Windows 10 on a laptop. We learned what Cortana thought of Siri, sent emails in the new Mail app, and got our weather forecast via Cortana's Edge integration. The store drew quite a morning crowd; by early afternoon, there were still several people trying out the new OS and eating free muffins (10 points to Microsoft).

The Home and Pro versions of Windows 10 were also made available to business customers this week. As with consumers, Microsoft is offering the free upgrade for PCs and tablets running Windows 7, 8, and 8.1. Enterprises and organizations with Volume Licensing will be able to upgrade to Windows 10 Enterprise and Windows 10 Education on Aug. 1.

Microsoft has added a few tweaks to the version of Windows 10 intended for large businesses, including virtualization for security purposes. To further boost the appeal of Windows 10 in the enterprise, Microsoft is offering a 90-day trial period through its Technet Evaluation Center.

Part of Microsoft's plan is to distribute regular updates to Windows 10, and launch day was no exception. July 29 also marked the release of Office Mobile apps for the new OS. Tablet users can download and install mobile-optimized versions of Word, Excel, PowerPoint, and OneNote from the Windows Store. All are integrated with OneDrive. 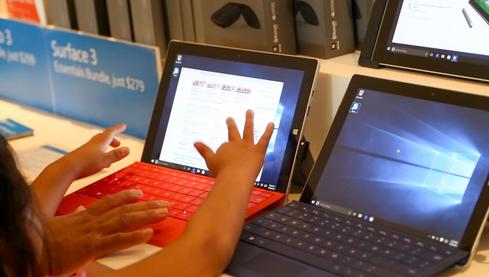 Tablet and PC customers running Windows 10 can expect the first Service Release (SR1) as soon as early August, writes The Verge. The bigger batch of patches, which could arrive next week, will not contain new features, but will address some of the minor problems Windows 10 users have encountered.

The Windows 10 launch sparked some tension between Microsoft CEO Satya Nadella and Mozilla CEO Chris Beard, who wrote a letter to argue against the lack of customer choice in Windows 10.

His gripe, of course, is specific to users' browser options. Microsoft Edge becomes the default browser post-upgrade. In order to switch their default to Chrome or Firefox, users must elect to do so the first time either is launched. If they don't, they'll have to go digging around in their settings to make the switch. (Tip: Go to Settings > System > Default Apps.)

"It now takes more than twice the number of mouse clicks, scrolling through content and some technical sophistication for people to reassert the choices they had previously made in earlier versions of Windows," Beard writes.

Kelly Sheridan is the Staff Editor at Dark Reading, where she focuses on cybersecurity news and analysis. She is a business technology journalist who previously reported for InformationWeek, where she covered Microsoft, and Insurance & Technology, where she covered financial ... View Full Bio
We welcome your comments on this topic on our social media channels, or [contact us directly] with questions about the site.
Comment  |
Email This  |
Print  |
RSS
More Insights
Webcasts
People Are The Most Important Part of Autonomous SOC
Don't Miss This Cybersecurity Virtual Event
More Webcasts
White Papers
Osterman Research: Cyber Crisis Response - Fit For Today's Threat Landscape?
Dissonance in Data Security
More White Papers
Reports
Gartner Market Guide for Insider Risk Management Solutions
Building an Effective Cybersecurity Incident Response Team
More Reports

"eating free muffins (10 points to Microsoft)"
10 out a 100! Well, at least it's not pizza. But, how about something healthier, like salads, nuts or a Subway sandwich? Coffee wouldn't hurt either
Reply  |  Post Message  |  Messages List  |  Start a Board
Editors' Choice
Hot Topics