Microsoft rolls out Build 10240 and prepares the Windows 10 Office suite for its July 29 launch.

We're less than two weeks out from the July 29 launch of Windows 10, and Microsoft is down to the wire, putting the final touches on what promises to mark a "seminal moment for the company," as described by COO Kevin Turner at this year's Worldwide Partner Conference (WPC) in Orlando.

The predicted success of Windows 10 is a key part of Microsoft's strategy for its 2016 fiscal year, Turner explained. New features like the availability of "Windows-as-a-Service," singular app platform and Windows Store, new mobility of experiences, and updated hardware designs are expected to usher Microsoft into the modern age.

It won't be long until we find out whether Redmond's plan works.

Officials have announced the rollout of Build 10240 to Windows Insiders in the Fast and Slow rings. Sources have reported this is the final release to manufacturing (RTM) build, which will be sent to PC makers for downloading on new devices, reported The Verge.

"Over the past few days we've been preparing our release pipelines and processes, and this build is one step closer to what customers will start to receive on 7/29," wrote Microsoft's Gabe Aul, general manager of its OSG Data and Fundamentals team, in a blog post on the news.

From this point forward, Windows 10 builds will only be available via Windows Update. If you want to download 10240, you can either wait for automatic installation or go to Start > Settings > Update & Security > Windows Update > Check for updates.

Seasoned Insiders will notice the desktop watermark is missing from 10240, which also brings a few key performance gains for the Microsoft Edge browser. Updates for Windows and its apps will continue to appear in the Windows Store over the next two weeks, said Aul.

Build 10240 also has a few updates to Office for Windows 10, the touch-friendly productivity suite for mobile devices running the new OS. Microsoft is ditching the "preview" tag for Office, Word, Excel, and PowerPoint, and adding "mobile" to each app name for PCs and tablets so as to distinguish from the Office desktop suite. 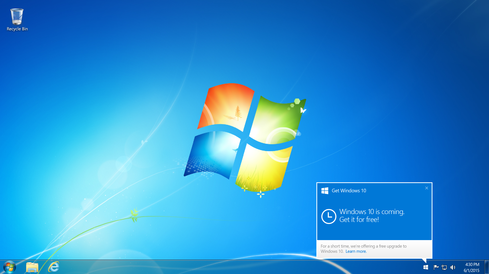 While the Office apps haven't gotten major makeovers, Microsoft has done some refinement so they run smoothly along with the rest of Windows 10. Aul noted customers will need an Office 365 subscription to edit on Windows 10 PCs and larger tablets, but all viewing -- and most editing -- will be free for noncommercial use on products measuring 10.1-inches or smaller.

Will we see even more changes to Windows 10 between now and July 29? Probably.

Now that Windows is distributed as a service, Insiders will continue testing builds before and after launch day to inform updates. On July 29, Microsoft will first release Windows 10 to Insiders so it can ensure compatibility before sending upgrade notifications to the general public.

Kelly Sheridan is the Staff Editor at Dark Reading, where she focuses on cybersecurity news and analysis. She is a business technology journalist who previously reported for InformationWeek, where she covered Microsoft, and Insurance & Technology, where she covered financial ... View Full Bio
We welcome your comments on this topic on our social media channels, or [contact us directly] with questions about the site.
Comment  |
Email This  |
Print  |
RSS
More Insights
Webcasts
Unifying Your Endpoint Security Strategy
Leveraging Infrastructure as Code to Streamline Security & Operations
More Webcasts
White Papers
Incident Readiness and Building Response Playbook
Privileged Access Management Checklist
More White Papers
Reports
Future Proofing Your Network for 5G
Gartner's Top 9 Security Trends in 2020
More Reports