Microsoft news from this week included pricing and release date for the Surface Hub, clarification about the Edge Internet browser offering for some enterprise users of Windows 10, an updated Skype, and changes to Office 365 online.

All eyes were on Apple's Worldwide Developer Conference (WWDC) early this week, drawing the spotlight away from Redmond. While Tim Cook and other execs talked about updates to iOS 9, music streaming, and Apple Watch, Microsoft quietly released some news of its own.

Monday kicked off with a few updates to the user experience in Office 365 online. New features include:

New features will be available across all Office 365 Web apps in a set of icons located in the top right of the navigation bar.

[Looking for a way to unwind this summer? Try one of the 10 Geekiest Beach Reads of 2015.]

We also learned this week that certain Windows 10 enterprise users won't be getting Microsoft Edge, the new browser intended to replace Internet Explorer for most users when the OS launches later this summer.

Gartner analysts stated this week that Windows 10 users on the Long Term Servicing Branch (LTSB) will not receive the Edge browser, a report confirmed by ZDNet. LTSB is only available to Windows 10 Enterprise customers, and machines on the plan are limited to security fixes and major updates.

Businesses running mission-critical apps and that don't want to risk new features will choose LTSB, which is why their machines won't include Edge. Microsoft plans to update Edge frequently, so there is little reason for an LTSB machine to have the browser if it won't receive updates.

Later in the week, Microsoft revealed the preorder date and pricing for Surface Hub, the huge productivity tool intended to facilitate simple and efficient collaboration among employees. The multi-purpose, touch-friendly screen can serve as a central display for tablets and PCs. It also makes it easier for remote workers to participate in a meeting.

Businesses can start to preorder the Surface Hub on July 1, though global shipping won't start until September. A smaller 55-inch model will cost $6,999; its massive 84-inch counterpart will be priced at $19,999. 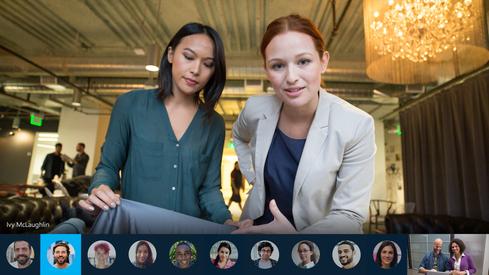 The Surface Hub will not be made overseas, as most of Microsoft's devices are. It's being built 200 miles outside the company's Redmond, Wash., headquarters, in Wilsonville, Oregon, The New York Times reported.

This is an interesting move for Microsoft, and it turns out that the Surface Hub's massive size is reason for its production location. Its screen is so large that Microsoft couldn't find existing assembly lines to accommodate building in Asia. Further, its weight of 220 pounds would make the larger edition expensive to ship overseas.

Microsoft on Thursday delivered a Skype update intended to simplify the user experience. Starting July 7, PC users running the Windows modern application for Skype will be updated to the Windows desktop app.

Kelly Sheridan is the Staff Editor at Dark Reading, where she focuses on cybersecurity news and analysis. She is a business technology journalist who previously reported for InformationWeek, where she covered Microsoft, and Insurance & Technology, where she covered financial ... View Full Bio
We welcome your comments on this topic on our social media channels, or [contact us directly] with questions about the site.
Comment  |
Email This  |
Print  |
RSS
More Insights
Webcasts
Detecting and Preventing Insider Data Leaks
Hybrid Cloud: The Great Balancing Act
More Webcasts
White Papers
Why Add Security to Your Skill Set and How to Do It
5G-Enabled Edges of Tomorrow Require Converged Network and Security
More White Papers
Reports
Are We Cyber-Resilient? The Key Question Every Organization Must Answer
Building an Effective Cybersecurity Incident Response Team
More Reports