We've gotten peeks at many of the upcoming Windows 10 features for users, such as the Start menu and virtual desktops. But what's coming for enterprises?

Microsoft revealed more information Friday about Windows 10's enterprise-oriented features. Expected around the middle of next year, the new operating system will include a variety of new UI elements to make it more user friendly than Windows 8, including a Start menu, virtual desktops, and resizable Windows Store apps that behave more like legacy apps. Though less visible than these UI changes, Windows 10's beneath-the-hood improvements for enterprises will be equally important, allowing businesses to deploy and manage the OS more easily than they have with past versions.

In a Friday blog post, the company said Windows 10 will allow devices to connect to cloud-oriented Azure Active Directory (AD), adding to current support in Windows for the traditional version of AD. Users will be able to log in to Windows with Azure AD accounts, and they'll be able to mix both AD and Azure AD together.

Microsoft also said AD and Azure AD will work well when used in tandem. If a user accesses a computer using his AD credentials, for example, Windows can automatically log him into cloud-based services such as Office 365 or the Windows Store, all without requiring the user to enter Azure AD information. Microsoft says this approach means users will no longer need to remember multiple user IDs and passwords.

Microsoft also announced Friday that Windows 10's device management options will be more expansive than Windows 8.1's. In the latter OS, Microsoft introduced mobile device management (MDM) capabilities that allowed enterprises to manage PCs, tablets, and smartphones with one technique. This addition was designed primarily for "bring your own device" (BYOD) scenarios, but in Windows 10, Microsoft will add MDM options for corporate-owned devices. The additions will include support for managing multiple users who share a single device, full control over the Windows Store, VPN and device-wipe capabilities, and the configuration of Enterprise Data Protection policies. 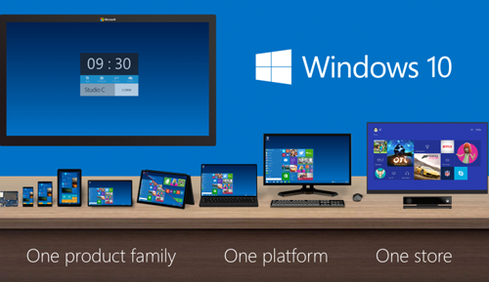 The newly announced features add to the growing list of enterprise-oriented Windows 10 touches that Microsoft has revealed in the last few weeks. In late October, the company said it is working to make Windows 10 easier to deploy. For example, the OS will impose the same hardware requirements as Windows 7 and 8, meaning that enterprises should be able to upgrade most of their current PCs.

Windows 10 will also support in-place upgrades, meaning admins won't have to wipe a PC's previous OS before installing Win 10. What's more, the upgrades will preserve all the apps, data, and configurations from the version of Windows being replaced; once Windows 10 has been installed, users shouldn't have to go hunting for lost documents or reinstall missing apps.

"We understand the challenges that many organizations experienced as part of their Windows XP to Windows 7 migrations, and are working hard to ensure that compatibility between Windows 7, Windows 8 and Windows 10 is excellent," the company said in a blog post.

Windows 10 will also feature new runtime configuration tools that will allow enterprises to configure devices for business use without performing reimaging. This potentially time-saving feature will support configuration tasks that include the provisioning of WiFi, VPN, and e-mail profiles, as well as enforcement of security policies and the installation of apps, language packs, and security updates. Windows 10 will also allow admins to enroll devices automatically into an MDM service for ongoing management. In the blog post, Microsoft said that the new configuration flexibility could enable "choose your own device" scenarios for employees.

Earlier in October, Microsoft said Windows 10 will boast improved security, including a new two-factor authentication feature that treats the device as one factor and a user PIN or biometric signature (such as a fingerprint) as the other. The OS will separate personal and corporate data -- another element that could be useful in BYOD environments.

Will Windows 10's improved interface and enhanced enterprise management features help Microsoft score after two years of stumbling with Windows 8? Sound off in the comments.

Michael Endler joined InformationWeek as an associate editor in 2012. He previously worked in talent representation in the entertainment industry, as a freelance copywriter and photojournalist, and as a teacher. Michael earned a BA in English from Stanford University in 2005 ... View Full Bio
We welcome your comments on this topic on our social media channels, or [contact us directly] with questions about the site.
Comment  |
Email This  |
Print  |
RSS
More Insights
Webcasts
Zero Trust for a Work-From Home World
Nip Ransomware in the FUD: Detecting Attacks Pre-Encryption
More Webcasts
White Papers
Why Add Security to Your Skill Set and How to Do It
The Hidden Security Risks of APIs: How to Protect Your Brand, Business, and Data
More White Papers
Reports
The State of DevSecOps Report
Building an Effective Cybersecurity Incident Response Team
More Reports


I hope Windows 10 is as good as it seems. Granted all these things should have been in Windows 8 but it looks like MS has listened to all the criticism and fixed things in 10.

The only thing they've added so far was what the Whiners needed, an ugly start menu... Rejoice!!!
Reply  |  Post Message  |  Messages List  |  Start a Board

"The only thing they've added so far was what the Whiners needed, an ugly start menu... Rejoice!!"

I wouldn't say that. Virtual desktops, new search options, new keyboard shortcuts, new management and security features, windowed Modern apps, improved app snapping, a more cohesive experience on 2-in-1 devices, etc. These new features aren't necessarily groundbreaking, but they show that Windows 10 is more than just Windows 8.1 with a Start menu. And since the OS is still 5-7 months (give or take) away from GA, I'm pretty sure we'll see a lot of other changes.
Reply  |  Post Message  |  Messages List  |  Start a Board


It is mentioned in this article that 10 will support inplace upgrades. In my experience it's always best to wipe a HD when upgrading it, no matter what they say about it being supported. Does anyone do inplace upgrades routinely?

I'm with you, @Paul, the proof will be in the pudding on that one. They have made that claim before and you usually end up with nothing but head scratching problems. But if it works this time, will be awesome.

The real question is when businesses like one I work for, which just made XP to Win 7 conversion in past couple of years, will want to even deal with Win 10. We don't get caught up in the o/s itself, only what apps you can run on it. The Win 7 upgrade was really about two things for us: The upcoming drop of XP support and the desire to standardize on hardware/Win 7 for imaging deployment.

The Azure stuff in Win 10 may be huge for cloud users but that isn't even on radar for us. We manufacture stuff, I'm still waiting for viable reason from someone why I would make my shopfloor dependent on an internet connection to print a shipping label?
Reply  |  Post Message  |  Messages List  |  Start a Board


Spot on.  This is really not about buying into MS latest GUI or widgets....many are trying to run a business and Windows is just the foundation on which the business POS, accounting, auditing, editorials, etc. are conducted on and every new version of Office or Windows continues to be a business disruption.  20 years of the start menu cannot disappear overnight.  Many, if not the majority, of company employees are not tech savvy and don't care about the latest oh-ah features of windows.....they want to finish their work and get home to General Hospital, go muddin or whatever that does not involve technology.  There is too much assumption by software providers that people actually give two shakes about their OS or office productivity products.


I read with amusement how many of posts here mock users who just want their desktop back.  With a BILLION user worldwide, major changes to the GUI are going to be met with resistance.  In many ways, Windows 8 reminds me of the recent elections.....the message, "we know what's good for you"  That message was soundly rejected as was Windows 8.  Both camps will argue until they are blue in the face, but until there is acceptance that the user base has the la$t say in the matter, products will continue to falter.  XP was the last time where MS offered a choice between old and new.  IT had an option for those who did not want to be impacted by a learning curve, it was the "Classic" mode.  How hard is it to respect your users by allowing a certain degree of transition by reining back on the new interface?  Apparently not much of 3rd party developers are able to deploy in no time a Classic interface Shell to Windows 8 while MS says it can't be done...then trots out 8.1.....total disrespect.  And that also goes same to each one you that call them whiners.

11 Ways DevOps Is Evolving Lisa Morgan, Freelance Writer,  2/18/2021
White Papers
Why Add Security to Your Skill Set and How to Do It
Improving Security by Moving Beyond VPN
Intelligent Outcomes Are Key to Business Resilience
Understanding Credential Abuse Attacks: A Real-World Example
Balancing Hybrid Storage as Part of a Hybrid Cloud Data Management Strategy